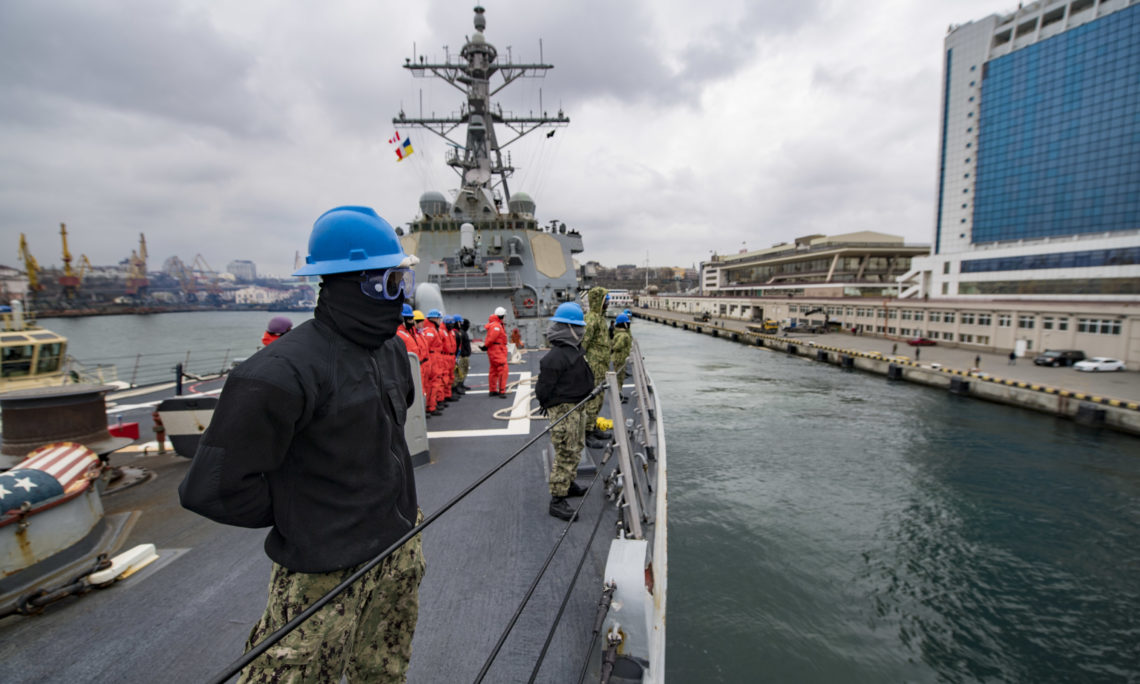 During a Feb. 26 press conference on the pier adjacent to the ship, Ambassador Volker emphasized the importance of Donald Cook’s presence in the Black Sea.

“This magnificent ship is a symbol of U.S. determination to contribute to security and stability, obviously for the United States globally, but also for our friends and allies around the world, including here on the Black Sea,” said Volker. “And this visit to Odesa, in particular, is a strong symbol of the United States’ commitment to the people of Ukraine.”

In his remarks, Donald Cook Commanding Officer Cmdr. Matthew Powel shared a personal anecdote about his great grandparents emigrating from Ukraine nearly a century ago. He said that it was a great personal privilege to visit a country that was a part of his heritage. Powel went on to summarize the ship’s two trips to the Black Sea this year.

“Donald Cook’s port visit to Odesa served as the third opportunity for our ship to engage with our Black Sea allies and partners in 2019,” said Powel. “Last month, we conducted a maritime exercise with our counterparts in the Georgian Coast Guard. Just a few days ago, we conducted training at sea with a Turkish frigate, and today we concluded a short, but significant visit to Odesa that allowed us to strengthen the U.S.-Ukrainian maritime relationship. These valuable engagements allow us to learn from each other, and I look forward to any future opportunities to return to the Black Sea.”

Leading up to the port visit, the ship conducted maritime interoperability training with the Turkish navy, aimed at enhancing regional maritime stability, combined readiness and naval capability with our NATO allies and partners.

Donald Cook entered the Black Sea on Feb. 19, to strengthen interoperability with NATO allies and partners and demonstrate our collective resolve in the Black Sea.

Donald Cook is the third U.S. naval vessel to conduct operations in the Black Sea in 2019, marking the fourth U.S. ship to visit Odesa since January 2018. In January, Donald Cook and Fort McHenry conducted port visits to Georgia and Romania, respectively.

The U.S. Navy routinely operates in the Black Sea consistent with international law, including the Montreux Convention.

After departing Odesa on Feb. 27, Donald Cook will depart the Black Sea on March 1, as scheduled. It will then continue its eighth forward-deployed naval forces patrol in the U.S. 6th Fleet area of operations.

U.S. 6th Fleet, headquartered in Naples, Italy, conducts the full spectrum of joint and naval operations, often in concert with allied and interagency partners, in order to advance U.S. national interests and security and stability in Europe and Africa.