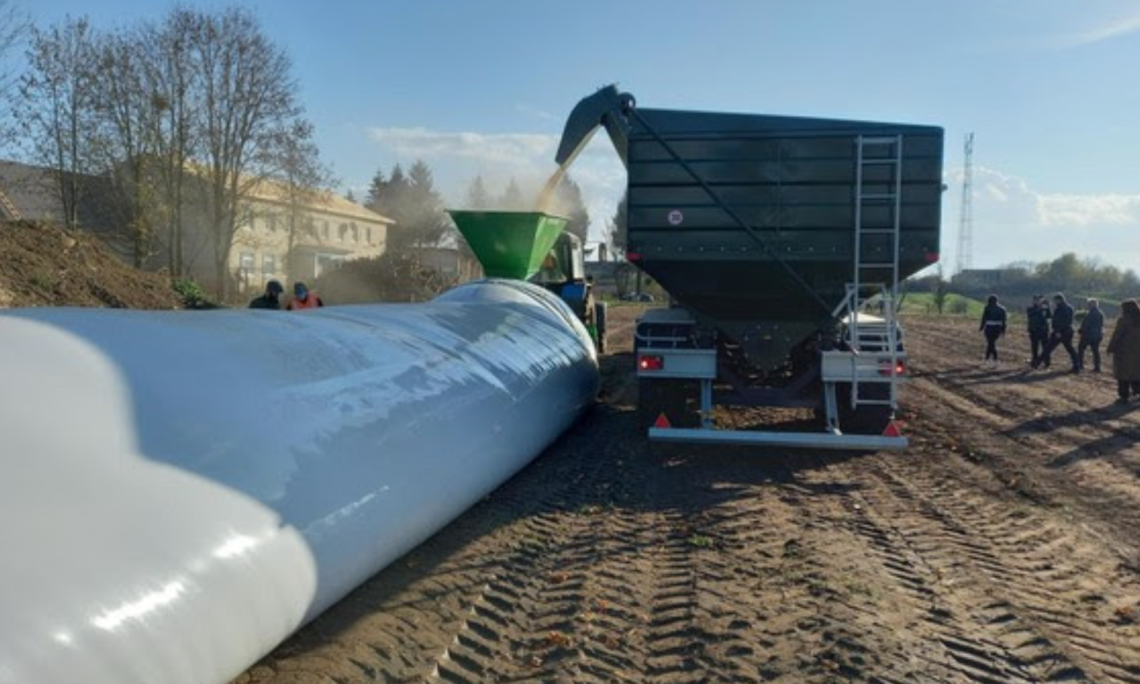 As of November 2022, the coordinated action of Ukrainian farmers, supporting countries, and charitable organizations are fulfilling Ukraine’s urgent need for grain storage resulting from the impacts of the Russian Federation’s unprovoked war, including the previous blockade of Ukraine’s Black Sea ports. This supplemental storage provided by the international community bolsters Ukraine’s economy by enabling farmers to store crops – including corn, wheat, and sunflower seed which are critical to food security in the country and globally – until they are sold for export, processing, or domestic use.

While Ukrainian farmers continued to harvest throughout this year, they have been unable to safely store their harvests. The Russian Federation’s months-long blockage of Black Sea ports caused a massive accumulation and backlog of Ukrainian grain from last year. In addition, an estimated 15 percent of storage has been damaged, destroyed, or has become inaccessible because of the damage to Ukraine’s civilian infrastructure. While the UN-brokered Black Sea Grain Initiative has opened up some of Ukraine’s Black Sea ports and, along with the EU Solidarity Lanes, has been critical to releasing significant amounts of Ukrainian grain to the global market and stabilizing global food prices, overall exports have been cut in half relative to prior years. As a result, Ukraine’s Ministry of Agrarian Policy and Food requested support for 15 million metric tons (MMT) of supplemental storage.

The United Nations Food and Agriculture Organization, with financial donations from Canada, Japan, and the Minderoo Foundation, is covering 6.2 MMT of the storage needs. USAID’s Agriculture Resilience Initiative – Ukraine (AGRI-Ukraine) covers 1.7 MMT. The Howard G. Buffett Foundation is providing 0.676 MMT. This combined funding supports the purchase of storage bags, storage structures, and filling equipment, much of which should be reusable for future harvests. Ukrainian farmers are covering the costs for the remaining 6.424 MMT.

As Putin continues to manipulate the global food supply, allies and partners have united to support Ukrainian farmers as they continue to feed the world. These unified efforts are a testament to what can be accomplished when donors and the people of Ukraine unite to address surging food needs around the world.

This announcement builds on the Agency’s broader effort to support Ukraine’s agriculture sector, the bedrock of its economy, through AGRI-Ukraine.

AGRI-Ukraine will provide 8,000 storage sleeves, 29 grain loading machines, and support the establishment of 69 modular grain storage facilities. AGRI-Ukraine is working with 13 Ukrainian companies that will use these items to provide storage services to micro-, small-, and medium-sized grain-producers in Ukraine with a focus on corn and sunflower seed. This effort will directly enable more than 2,000 farmers to preserve their harvest until they can sell it for export or domestic use and earn much-needed revenue, create jobs for Ukrainian workers, and ease the global food security crisis exacerbated by Putin’s brutal war against Ukraine.

Ukraine’s agriculture sector remains acutely vulnerable in the immediate and the long term. The costs of planting, irrigating, fertilizing, harvesting, and transporting crops have all risen substantially, draining farmers’ primary source of income and jeopardizing their ability and willingness to plant for future seasons.

Launched in July, AGRI-Ukraine is designed to bolster Ukrainian agricultural production and exports and to help alleviate the global food security crisis. USAID contributed $100 million and seeks to leverage an additional $150 million from fellow donors, the private sector, and foundations, with an overall investment target of $250 million.