Home Початок | News & Events | U.S. Special Representative for Ukraine Negotiations, Ambassador Kurt Volker at a Press Conference on the Occasion of the Visit of the USS Donald Cook 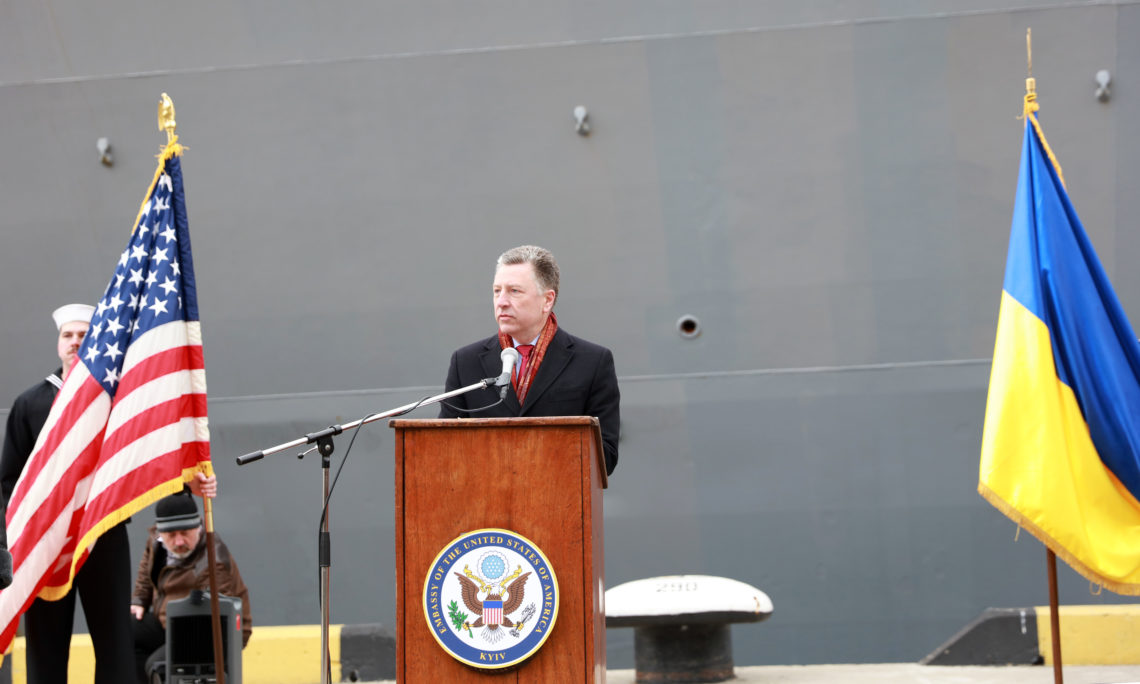 I am absolutely delighted to be here.  And I want to thank especially the sailors of the United States Navy, Commander Powell, his senior team that is here, who have brought the USS Donald Cook for this ship visit.

This magnificent ship is a symbol of U.S. determination to contribute to security and stability, obviously for the United States globally, but also for our friends and allies around the world, including here on the Black Sea.

And this visit to Odesa, in particular, is a strong symbol of the United States’ commitment to the people of Ukraine.

This ship is here at the invitation and with the support of the government of Ukraine.  That is a recognition of the sovereignty of Ukraine over this territory and a respect for Ukraine’s sovereignty and territorial integrity.

So we are grateful for that invitation and I would hope that all of Ukraine’s neighbors would show equal respect for Ukraine’s sovereignty and territorial integrity and that the presence of any other military forces would also be by invitation only.

And that is support not only for security and stability in the region, but also for Ukraine’s political aspirations as a democracy and for its economic development and prosperity.

It’s a hard road.  It requires reform and persistence and hard decisions, but the United States is Ukraine’s partner in making those decisions and supporting those reforms.

The United States, of course, is not Ukraine’s only partner and just as important is the strong support for Ukraine from the European Union.

And I’m joined today by a number of distinguished visitors and allow me to introduce them.

First, you all know President Trump’s representative here in Ukraine, our Ambassador Masha [Marie] Yovanovitch.  We also have our friend and colleague, Ambassador of the United States to the European Union, Ambassador Gordon Sondland.  We have also another American Ambassador, Ambassador Philip Reeker, who has served as U.S. Ambassador to Macedonia and is now currently serving as Political Advisor and is here on behalf of the Supreme Allied Commander Europe, General Scaparrotti.

We are also very pleased that colleagues from the European Union have joined us here.

Later today, we will be joined by senior representatives of the Ukrainian government, including President Poroshenko, Minister of Defense Poltorak and Foreign Minister Klimkin, and the Chief of Naval Operations.  And finally, I would like once again to express my thanks to the government of Ukraine for this invitation for the United States to make this ship visit here.

And I would also like, once again, to express my thanks to Commander Powell and the men and women serving on the USS Donald Cook.  You do a great service to our country and the world, and thank you very much.

I would now like to invite to come to the podium Ambassador Sondland and Jean-Christophe Belliard to say a few words and then we’ll all be delighted to take a few questions as well.