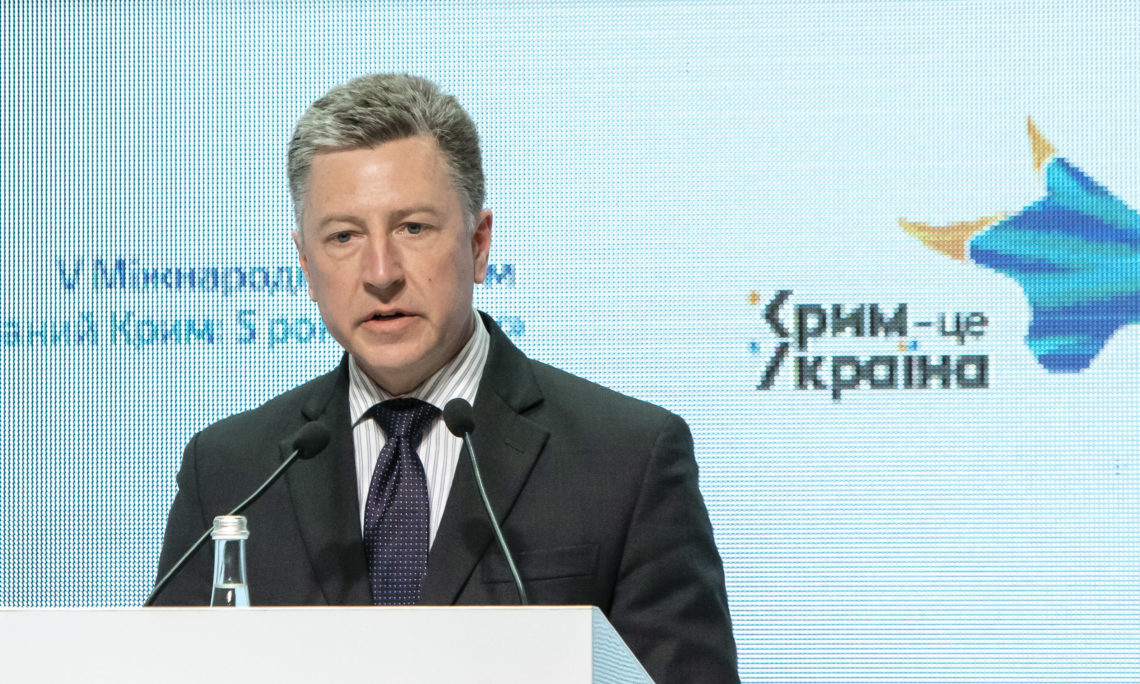 Thank you.  Thank you very much.

Five years and one week ago today, we saw the appearance of men in green uniforms in Crimea, the little green men, as we say.  Russian military, special forces, intelligence that led the operation to separate Crimea from the rest of Ukraine to take it over and that very swiftly, in a matter of weeks, led to Russia claiming to annex the territory of Crimea.

But we know exactly what happened.  And, in fact, Russia has as much acknowledged that because it was giving medals to those who took part in that operation, with the date of February 20, 2014 emblazoned on them as a commemoration of that operation.

This one didn’t go as cleanly as the Russians may have hoped, because Ukrainians resisted.  It led to much larger operational fighting, eventually a continuing, but stale conflict in eastern Ukraine.

The United States acted more swiftly – as did Europe – after that second invasion.

We have given a great deal of other support to Ukraine along the way.  And the European Union has given significant financial resources to support Ukraine, the IMF has supported budgetary measures of Ukraine.  The United States has provided over $2.9 billion of assistance of various kinds, we have increased sanctions over time, we have lifted our ban on lethal arms sales to Ukraine so that Ukraine is able to acquire weapons that it needs to help defend itself.

All of these are measures that indicate U.S. support and broader transatlantic support for a sovereign, independent, democratic, market-oriented, and secure Ukraine.  And that is extraordinarily important to all of us, including the United States.

We remain interested in negotiating with Russia on the restoration of Ukraine’s sovereignty and territorial integrity overall.  The most likely place of where this is possible now is in eastern Ukraine and the Donbas, although that is also something that Russia has not shown interest in dealing with at the moment.  And we still hold out hope that they will and when Russia is ready to have serious discussions about the end of the conflict in the east, about bringing peace to the inhabitants of that area – the Russian speaking population and others that live in eastern Ukraine – to see the humanitarian situation in the east, to see the conflict ended and the territory be eventually restored to a normal situation, we are ready to talk about that and we are ready to provide our support.

In the meantime, we will continue to lend our full support to Ukraine.  The United States maybe is a peculiar democracy; we certainly have our share of problems.  But what we tend to believe is that we managed to form a government that is, as we like to say, by, for, and of the people.  It means that the government is there to serve the people, not to rule them.  It means that if they don’t do it well, we will change them.  And it means that the people along the way are the ones in charge of the destiny of the country.  And that is something that is true of all democracies and we are the first to admit that we all have failures, we all fall down.

If you look around the world today, you see the rise of the populist movements, of authoritarianism, of different types of xenophobia, racism, anti-Semitism, of simple populist solutions that will not really solve the country’s problems.

We’re all suffering through this – by ‘we’ I mean country by country in Europe, look at the United States, where we also see these things – and Ukraine is no different.  Ukraine is suffering many of the same pressures.

But that is now a challenge to all of you –  to the leaders of Ukraine, to the people of Ukraine –  to work as hard as you possibly can to build that strong society.

Yes, you’ve been a victim of aggression and none of us accept that.  I should refer also to Secretary of State Pompeo’s formal declaration of nonrecognition of Russia’s claimed annexation of Crimea.

And yes, we continue to have a conflict in the east and yes, we must do everything we can to prevent a new aggression.

But in that period of time, it’s also vitally important that Ukraine is doing everything possible to strengthen their democracy, strengthen reforms, strengthen the economy, build the society that will be welcome in Europe, a magnet to people of the east and a beacon for those further east, who can see that a society such as Ukraine can be successful.

What does that mean?

We’re in an election period right now.  Most important thing, immediately, is for these elections to be as clean and free and fair as possible.  That’s a responsibility of all parties, all candidates, all authorities, all citizens, to try to help make this the cleanest and best election that Ukraine has had to date.  And that applies both to the presidential election and the parliamentary election this fall.

It means not giving up on the fight against corruption.  Corruption exists everywhere, we all know it, it’s even in Europe, it’s even in our country.  It is a particular problem in Ukraine.  A lot of efforts have been made over the past several years to fight it.  Now is not the time to back off, now is the time to go forward.

It means insisting on integrity.  This is one of those societal or cultural attributes that sometimes again, people can get tired, they can give up, they can believe there is no hope, nothing will change.  But if each individual acts with integrity, they can hold others to account in acting with integrity as well.  And so the integrity of people in political life is critically important.

It means looking at all the sectors of a strong society: the democratic institutions, the judiciary, the parliament, the electoral process.  It means the economy, it means making sure that it’s fair, that there’s rule of law, that if someone wants to invest they can have a fair opportunity to invest and reasonable expectations that if there is a problem, the courts will act fairly, and reasonable expectations of making a legitimate profit, because that’s what the economy is designed to do.  Not the illegitimate profits, but legitimate profits.  And it means building security, because a strong society is all that we want that has the capacity, the means, the determination to protect itself.

The United States strongly supports Ukraine.  We are your partner in all of these reforms.  Ultimately, it is up to you: you must be the decision makers and you must be the actors.  But I can assure you that we are your partners in all of these steps and we look forward to working with you now, through this election, after this election, with however the governments emerge after the election, after that.  We’re here for the long haul and we’re here to support the peaceful, strong, democratic, prosperous, secure Ukraine that sees its borders and its territories, including Crimea, fully restored.