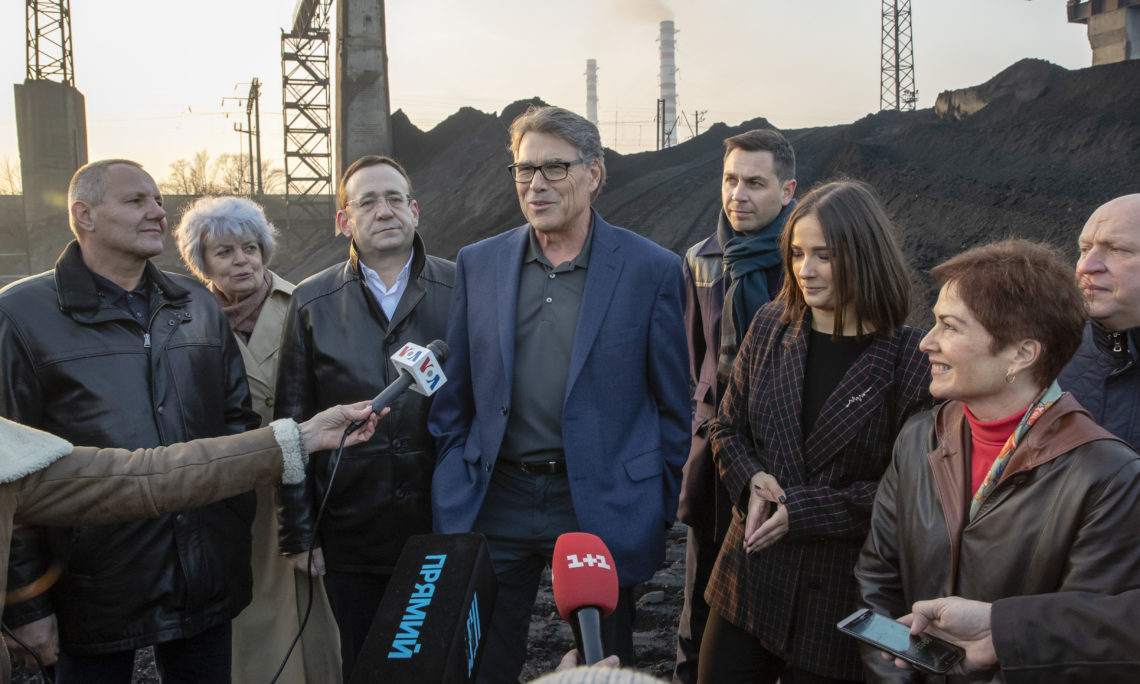 U.S. Secretary of Energy Rick Perry:  Hey, here’s one of the things – we’re standing on a literal mountain of Pennsylvania coal, and this is a great example of the partnership that the United States and Ukraine is working on, and have in the past, and we look forward to expanding that in the future, whether it’s in the nuclear energy side – which now Westinghouse is, I think, supplying about half of the fuel for the nuclear plants. The diversity of energy resources for Ukraine and this region is really important. And you understand this, being the Minister of Energy, how important a diverse portfolio of energy resources — coal being one of them, clean coal technology that we’re working on in the United States, obviously zero emissions with nuclear power, finding the resources that are underground here — is very important for the Ukrainian people and for the leadership here.  And so we’ll be talking to them about companies – U.S. companies – that are involved in the extraction, exploration extraction, development of underground sources of energy – obviously crude and liquefied natural gas, natural gas in its normal form.  So, the potential for Ukraine to be a net energy exporter is very, very high.  And a partnership with the United States is what we’re very interested in.  Anyway, I want to say thank you to the Minister and to the gentlemen who run this facility for hosting us here today, and we look forward to the next 72 hours or so to continue to develop the relationship with Ukraine and to build even a stronger relationship than we have today. The Ambassador is here today, and we greatly appreciate her hospitality as well.  So anyway, thank you all for coming out. [I’ll] take a couple questions.

Question: Do any of the companies have an interest to explore gas?

U.S. Secretary of Energy Rick Perry: You know, I’m not going to name any names. From the standpoint of having been the governor of Texas, there’s a lot of Texas companies that are rather successful in the oil and gas business.  It was a Texan by the name of George Mitchell who developed hydraulic fracturing and then the Department of Energy National Labs were involved in technology that allowed for directional drilling to be as successful as it is, so we’ve got a lot of companies that are going to be interested in coming over and talking with the Ukrainian government from the standpoint of being partners in exploration, in pipelines that are going to be built, the infrastructure potential that is here put a lot of citizens of Ukraine to work and improved their quality of life, as well.

Question: Do you mind, what are the chances that the second Nord Stream would be blocked?

U.S. Secretary of Energy Rick Perry: You know, that’s certainly a potential, and we spoke about this yesterday in Poland. There are very few countries in the European Union that are for this, for Nord Stream 2.  The United States is on record strongly being against it.  We also understand that regardless of whether the Russians decide to go through with a commercial operation that is going to fail — it’s going to fail because it’s not a commercially viable operation, and they may still go through with it — but we’re going to do everything that we can to give the European Union membership as many options as they can have.  This is not just about the United States selling LNG into Europe.  We’re for the Trans-Adriatic pipeline that’s bringing Caspian gas into the southern part of Europe, we’re for, you know, there’s a number of LNG terminals on the southern part of either Croatia, Romania, that can deliver gas, and obviously the Poles are also developing that potential as well. Italy has a big facility.  So our point is: multiple choices – diversity of supply, diversity of routes, and diversity of resources, whether it’s coal or whether it’s nuclear power or whether it’s gas from other places in the world. We think it’s very important for the European membership countries to understand that Russia has a history of cutting off gas supplies, and that having these alternative sources of supply are important for the future development of Europe. Certainly Ukraine understands this as well as anyone. Thank you all for coming out and being with us today.

Remarks at Opening of Meeting:

I want to thank you, Oleg, for your hospitality and for your thoughtfulness.  What I mean by that is, we traveled from the coal supply depot to the facility here; I saw United States and Ukrainian flags flying together.

And we take very seriously our partnership with Ukraine.  And we think it’s very important to not just talk about it, but to actually have actions that back that up.  And it’s one of the reasons I’m here – it’s to clearly send a message of the U.S. engagement with Ukraine, our intentions to be good partners and to deliver on our part of the bargain.

So, with that said, again, thank you for your hospitality.  I think it’s better for me now to listen to you, and to the people around the table.