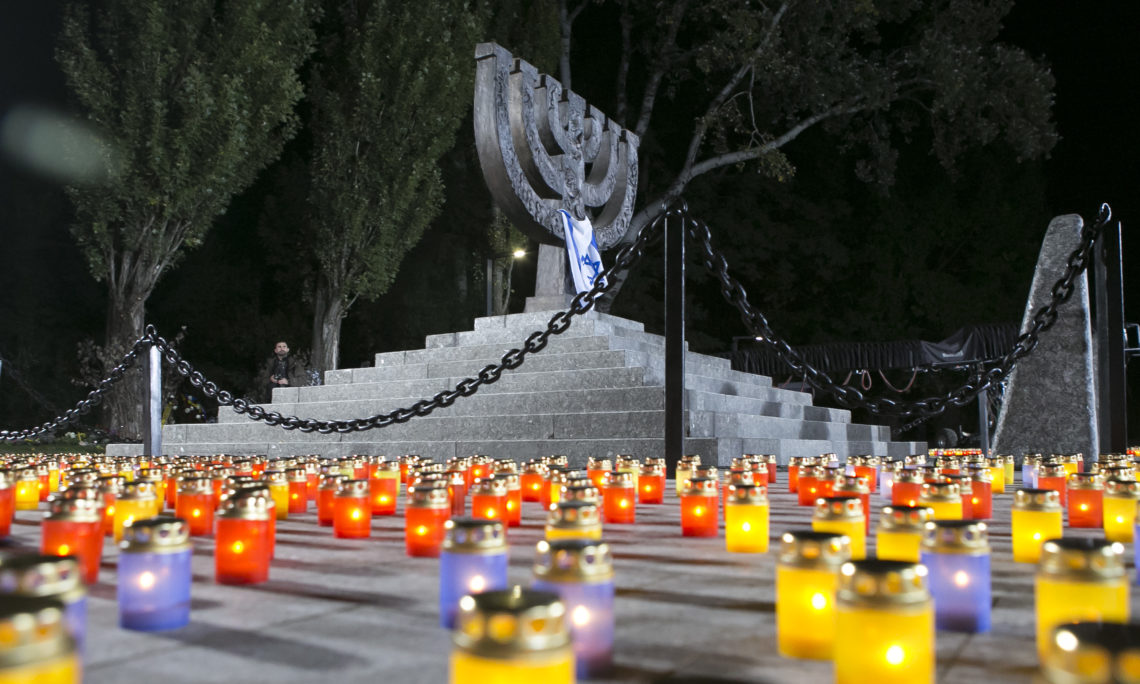 KYIV, Ukraine – Today, U.S. Secretary of Commerce Penny Pritzker delivered remarks at the official commemoration of the 75th anniversary of the Babyn Yar Massacre, following speeches by Ukrainian President Petro Poroshenko and President of the European Council Donald Tusk. Speaking on behalf of President Barack Obama and the U.S. government, Secretary Pritzker honored the memories of the 100,000 Jews, Roma, political prisoners, and Soviet prisoners of war who were murdered at the Babyn Yar ravine near Nazi-occupied Kyiv in 1941. Earlier that day, Secretary Pritzker and the U.S. Presidential Delegation toured the Babyn Yar memorial site for private reflection and remembrance.

In her remarks, Secretary Pritzker reflected on her own family who lived in Podil 135 years ago, and the fact that they might have been killed at Babyn Yar had they not fled after the pogroms in 1881. She emphasized one of the lessons of the Holocaust—“thou shalt not be silent”—and encouraged all in attendance to speak out against hate, embrace the dignity of difference, and fight for inclusion and tolerance.

Remarks as Prepared for Delivery

Good evening. Before I begin, I want to acknowledge the passing of a true giant, Shimon Peres. May his light continue to illuminate our world’s path to greater peace and understanding.

President Poroshenko, President Gauck, and President Tusk: On behalf of the President of the United States, it is my great honor to be here in Kyiv – a city that has been close to my heart literally since the day I was born.

One hundred thirty-five years ago, my family lived in Podil – less than an hour’s walk from here in an apartment above their grain store on the Zhitny Rynok. But six decades before the atrocities of Babyn Yar, my family fled this magnificent city following the pogroms. Had they not fled, my family’s remains might be in this ravine.

We gather today to remember what happened here at Babyn Yar.

How do you speak about the unspeakable? How do you imagine the unimaginable? As my then 10-year-old great-grandfather was preparing to flee Kyiv, he looked to the Torah for an explanation of why God would allow his people to suffer so much – and so I, too, look to the Torah for guidance.

We all know the story of Cain and Abel.  Jealous that his brother was more favored by God, Cain killed Abel while they were working in the fields.

The Lord said to Cain, “Where is your brother Abel?”

To which the Lord said, “What have you done? Listen! Your brother’s blood cries out to me from the earth.

In this place, the blood of the victims of Babyn Yar still cries out to us from the earth. Seventy-five years ago, a basic tenet of humanity was violated. We are all destined to return to the earth someday, but it is not for man to decide when we return. A person may not shed another’s blood.

Although we can never bring back the souls that were taken, we cherish their memories by resolving that the past shall not repeat itself. A promise that is easily made but difficult to honor. Today, 75 years after Babyn Yar, human beings continue to commit unspeakable and unimaginable acts against each other.

Across Europe, across the United States, and across the entire globe, we are seeing a rising hate and fear of the other – like the kind that once drove my family from Kyiv and that made the Holocaust possible.

In times like these, it is all too easy to retreat into narrow self-interest. To ignore the plight of the stranger. To say to ourselves, “I am not the victim. This does not concern me.”

In times like these – when millions of men, women, and children are driven from their homes by hate and fear – we cannot afford the cost of indifference. Indifference spreads the notion that the problems of your neighbor are not your problems. It absolves us of our responsibility to be our brother’s keeper. It betrays our promise of “never again.”

We owe our fellow human beings more than indifference.

If one of the lessons of the Holocaust is “thou shalt not be silent,” then today, on this solemn anniversary, we must honor the memories of those who were murdered by taking action against hate.

We must not only speak out against hate, but fight every day for the ideals of inclusion and tolerance that form the root of our humanity. We must not only embrace the dignity of difference, but open our doors and our hearts to the victims who – in another life – might have been us.

May we never forget the basic tenet of our humanity: that it is not for man to decide when we return to earth. Even one life is too high a cost to pay for our indifference.

And we must always remember the sons and daughters silenced forever in this ravine, 75 years ago on Yom Kippur – a day devoted to the proposition that every human being can renew and become better.