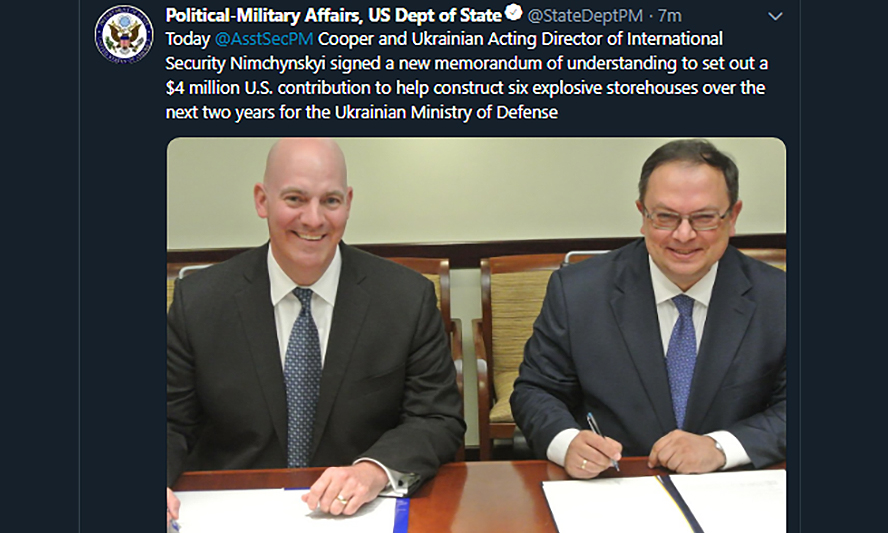 Today [June 25], the United States and Ukraine signed a new memorandum of understanding on Conventional Weapons Stockpile Management.  Signed by Assistant Secretary of State for Political-Military Affairs R. Clarke Cooper and Ukraine Ministry of Foreign Affairs Acting Director of the Directorate of International Security Ruslan Nimchynskyi, the memorandum sets out a $4 million U.S. contribution toward construction of six explosive storehouses over the next two years for the Ukrainian Ministry of Defense.  This project will enhance the safety and security of Ukraine’s munitions stockpiles, as well as advance Ukraine closer to its goal of meeting NATO and international standards for physical security and stockpile management.

From 2004 to 2018, the U.S. Conventional Weapons Destruction program has invested more than $40 million in support of Ukraine’s effort to address the legacy of the large quantities of conventional arms and ammunition inherited after the dissolution of the Soviet Union.  In 2018, as the Lead Nation for the NATO Partnership for Peace Trust Fund, the United States funded the destruction or demilitarization of over 1,700 metric tons of obsolete Soviet-vintage munitions in Ukraine.

In recent years, we have extended this partnership to save lives by providing support to clear landmines and other explosive hazards along the line of contact between the Ukrainian armed Forces and Russia-led forces in eastern Ukraine.  In 2018 alone, the U.S. government funded conventional weapons destruction efforts that cleared over 227,000 square meters (56 acres) of land and returned them to local communities.