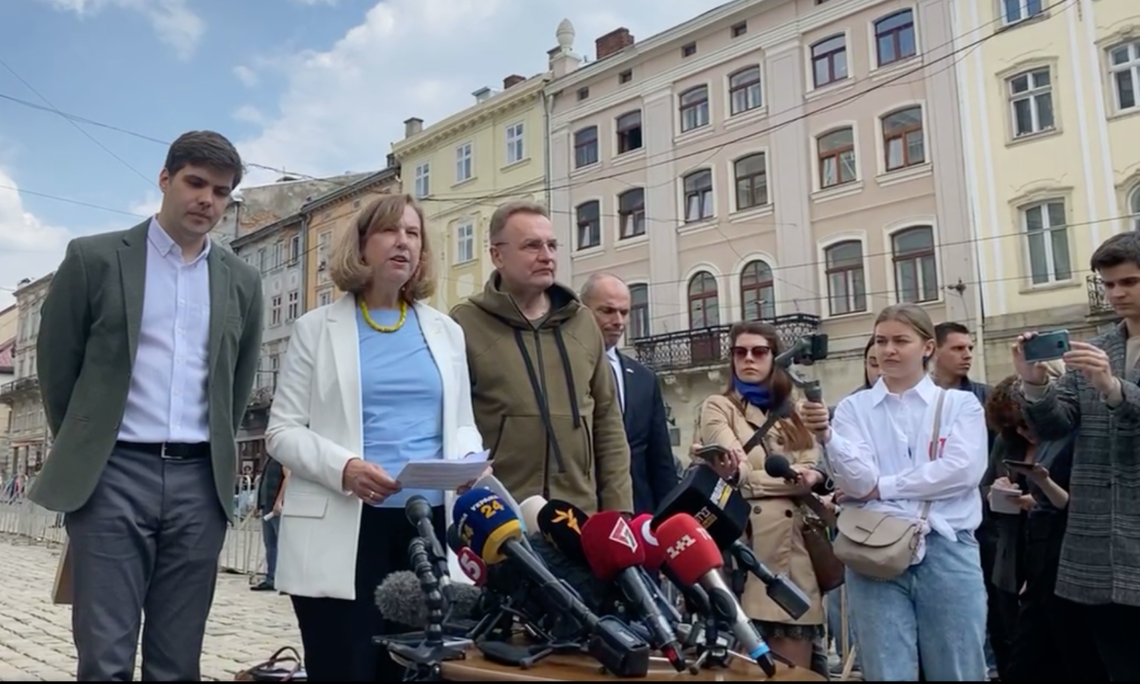 I am so happy to be back in Ukraine! This is my first trip back since Russia’s assault started on February 24.

Two days before Russia launched its horrific attack on Ukraine, I stood here in this square and said that President Putin’s “flagrant disrespect for international laws and norms would be met by a forceful response from the United States, our allies and partners.”

Today, nine weeks after the start of this unprovoked invasion I am proud to say that we have lived up to our word.

The United States, NATO allies, and other countries have armed and supplied Ukraine at a speed and scale that is unprecedented. We have fortified the eastern flank of NATO with thousands of troops.

And Ukraine’s allies and partners have imposed the most severe and punishing sanctions on Russia that the world has ever seen.

Today, it is clear that Putin has made a historic miscalculation in his unprovoked and unjustified attack on Ukraine.

In fact, he has achieved the opposite of what he set out to do. He sought to subjugate Ukraine, and instead, he showcased to the world Ukraine’s unity, resolve and bravery.

He attempted to divide allies and partners, and instead brought them together in a single voice opposed to his illegal invasion and horrific war crimes.

Ukrainians have shown the world what true heroism is—from the border guards at Snake Island who told a Russian warship what it could do to itself, to Azov regiment’s fearless defense of Mariupol, to President Zelenskyy and the entire Ukrainian government working throughout attacks on Kyiv while brave defenders defeated approaching Russian forces.

And to ordinary Ukrainians throughout the country who defended their cities, provided food and shelter to those in need, and those brave farmers who put their tractors to such good use.

While my team and I have been working day and night from Poland to facilitate the flow of security and humanitarian assistance to Ukraine, help American citizens in need, and telling the story of Ukraine’s heroism.

We are thrilled to be back and will continue our efforts to do everything possible to help Ukraine win this war.

This is why President Biden last requested last week an additional $33 billion in assistance for Ukraine.

As our support continues to expand, we look forward to working with the Ukrainian government, civil society and international organizations on the ground in Lviv and Kyiv to maximize the impact of our assistance.

We look forward to continuing our close collaboration with the Ukrainian government, humanitarian partners, and others to ensure Ukraine can continue to prevail in this historic struggle.

Slava Ukraini! Now I will take a few questions.