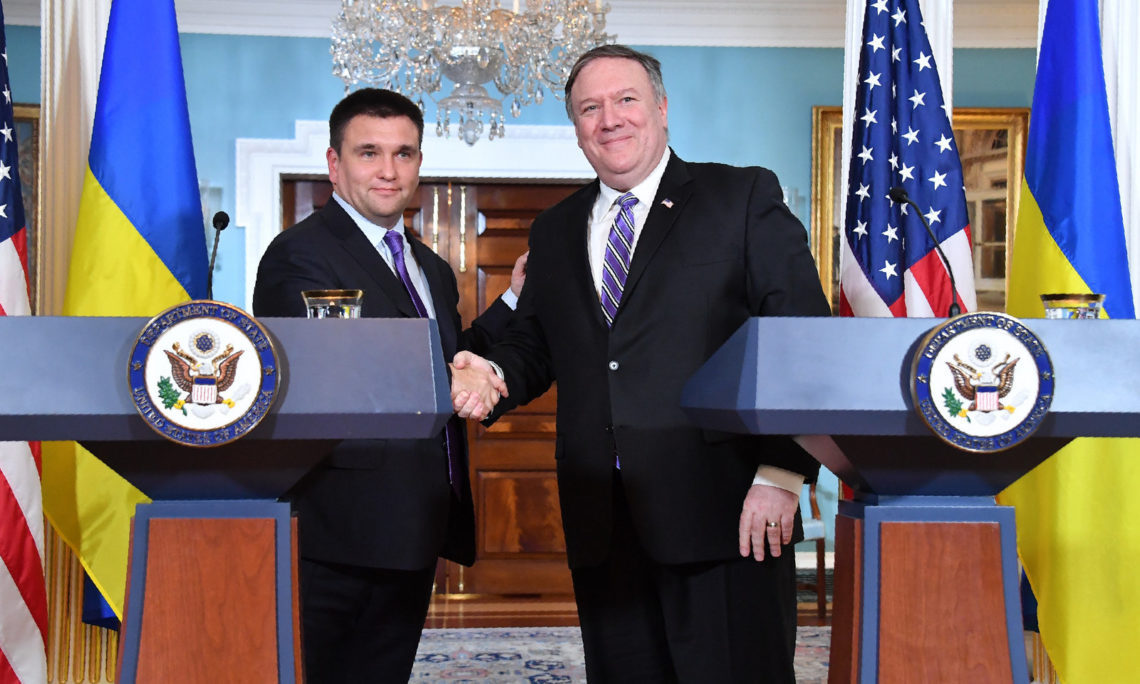 SECRETARY POMPEO: Good afternoon, everyone. It’s my honor today to welcome Minister Klimkin to Washington to breathe new life into the U.S.-Ukraine Strategic Partnership Commission and to reaffirm our unwavering support for a democratic Ukraine. It’s good to see you again. I saw you in Paris; it’s wonderful to spend some time with you again today, and I know you had a series of very productive meetings with our team as well.

Ten years ago, we initiated this dialogue to advance our mutual interests and grow our bonds as free nations. Today, we achieved progress on three pillars of the relationship, and I’ll talk about each of them. First, security and countering Russian aggression; second, the rule of law and humanitarian issues; and finally, economic and energy security. We’re bolstering Ukrainian democracy, growing prosperity, and better equipping Ukraine to counter Russia’s aggressive designs on that country.

Ukraine is at a critical point in history. During the 2014 Revolution of Dignity, the Ukrainian people sacrificed their lives to protect their independence and self-determination. They demanded that their government maintain Ukraine’s European orientation and end pervasive corruption.

Ukrainians continue to fight this battle as they work to build a modern, democratic, Western state.

They know that a free and well-governed nation is a hard-won victory, but it’s worth it. The United States supports those efforts and honors the achievements that you have made thus far.

That same spirit of courage and determination drives Ukrainians to continue to fight to uphold their national sovereignty and territorial integrity in the face of Russian aggression. Ukraine has no greater friend than the United States in this regard.

As we made clear in the Crimea Declaration this past summer, the United States will never accept Russia’s attempted annexation of Crimea. We will continue to impose consequences against Russia until Moscow fully implements the Minsk agreements and returns control of Crimea to Ukraine. As a show of our resolve, just last week we imposed a new round of sanctions on the supporters of Russian aggression in Ukraine.

Our dialogue today also included important discussions on the rule of law, anticorruption, relations with neighbors, and human rights. We explored how we can work together to promote democratic principles, press freedom, and judicial independence. These are all staples of a thriving, free society.

Advancing these crucial reform goals will ensure the ideals of the Revolution of Dignity are permanently woven into the fabric of a democratic Ukraine.

By strengthening your political institutions, these reforms will also make Ukraine more resilient in the face of Russian aggression.

And finally, we had a chance today to discuss energy security and economic reforms. We’ll keep working together to stop the Nord Stream 2 project that undermines Ukraine’s economic and strategic security and risks further compromising the sovereignty of European nations that depend on Russian gas.

We do not want our European friends to fall prey to the kind of political and economic manipulation Russia has attempted in Ukraine since it cast off its Soviet shackles.

Foreign Minister, thank you for being here today.

FOREIGN MINISTER KLIMKIN: Secretary Pompeo, dear friends, I am very glad to come to Washington to meet with you and to launch together the work of our Strategic Partnership Commission. Thanks again, Mike, for the invitation. It’s a pleasure to be here.

This year marks the 10th anniversary of the U.S.-Ukraine Charter on Strategic Partnership. The commission unites a number of ministers and governmental agencies on both sides – such as defense, commerce, energy, foreign affairs – that work together to advance our broad and intensive agenda, and the shared goals enumerated in the charter.

We’ve had a very good and productive discussion today on the whole range of issues that both our countries work on. I would like to stress that our strategic partnership is based on the common values that our two countries share. And today’s meeting showed once again that Ukraine and the United States have become real allies and friends. Today our countries stand shoulder to shoulder in countering Russia’s aggression. This aggression takes many forms. It’s the hot war in Ukraine, where Russia occupied Crimea and parts of Donbas, the war that took off over 11,000 people, the war which continued this very moment in the very heart of Europe.

It also takes the form of trying to undermine democratic institutions in the U.S. and in Europe, including Ukraine. With presidential and parliamentary elections coming up into Ukraine, we are looking at U.S. experience in countering Russia’s election meddling, as well as sharing with the U.S. our experience in dealing with this risk. We share the peace through strength approach, and appreciate the U.S. leadership showing the strength in the face of Russian malign behavior.

I would like to especially thank Secretary Pompeo once again for the Crimea Declaration, which was a demonstration of exactly such leadership and strength. We must not falter in the face of the aggressor, and pressure and the sanctions must remain in place until Moscow changes its course. However, so far we don’t see any change. On the contrary, we see Russia’s subversive activities in the Sea of Azov. We see shellings of our land and lives being lost every day. We see Ukrainian citizens held as political prisoners in Russian jails. And today, we discussed ways how Ukraine and the U.S. will continue to work together to strengthen our resilience.

We appreciate the U.S. support in strengthening our defense capabilities, both through training of our military and through providing defense equipment. As partners on those Budapest memorandums, thereby, Ukraine gave up the third largest nuclear arsenal in the world – the memorandum blatantly violated by Russia – we will continue to further develop our security and defense cooperation.

We will also continue to focus including in the framework for the Strategic Partnership Commission on strengthening, as the Secretary has just said, the rule of law in Ukraine; eradicating corruption, which is our most fundamental challenge aside from countering Russia’s aggression; and further support of our civil society.

We are thankful for U.S. support of Ukraine’s steady progress towards eventual membership in NATO and the European Union, and we appreciate the U.S. support and understandings that today Ukraine is defending not only territorial but also spiritual independence. So thank you again for the support of our spiritual independence and to create autocephaly of the Ukrainian Church.

We have also talked today about further expanding and giving a boost to our trade and investment as well as actual cooperation. Our trade increased 1.6 times over the past year. We can think about new ideas in this field such as exploring the possibility of a free trade area in the future.

Thanks, again, Mike for this invitation. Thank you for your very strong personal support. I look forward to welcoming you in Ukraine for the next round of our Strategic Partnership Commission in not-too-distant future. Thanks a lot.

SECRETARY POMPEO: Thank you. Wonderful to see you. Great, thank you.