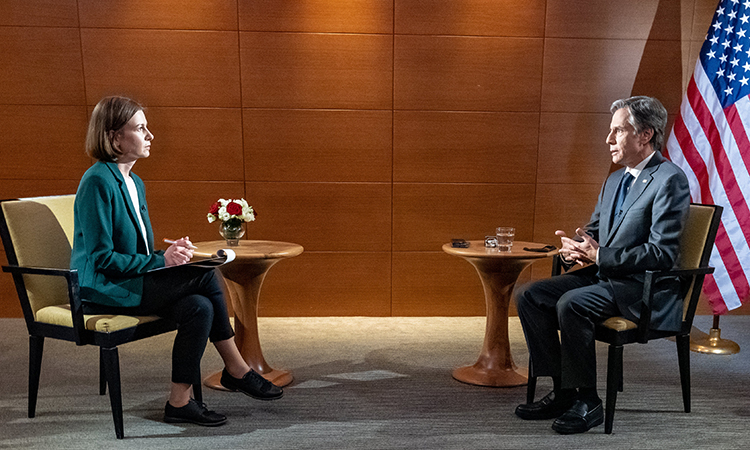 QUESTION:  Thank you for your time.  In April, we witnessed a buildup of Russia troops close to Ukraine’s border and even annexed Crimea.  Russia called it snap checks.  What lessons did the United States make from these so-called snap checks?

SECRETARY BLINKEN:  Well, I think the number one lesson is the absolute need to remain extremely vigilant against the possibility of reckless actions, aggression from Russia, directed at Ukraine.  You’re exactly right.  This was the largest concentration of Russian forces on Ukraine’s border since 2014, since Russia first invaded.  And so we’re very focused on that.  So are many other countries.  They’ve expressed not only their clear concern but their solidarity with Ukraine in standing against these actions.

Now, we’ve seen some of the forces pull back, but many still remain.  We’ve seen some heavy equipment pulled back, but a lot also remains.  And Russia has the capacity, on pretty short notice, to take further aggressive actions.  So we are being very vigilant about that, watching it very carefully, and also making sure that we’re helping Ukraine have the means to defend itself, defend its sovereignty, defend its territory.

QUESTION:  This situation raised a question in Ukraine society in:  What could Ukraine’s partners do in case of new invasion of Ukraine, yes, from Russia?

So I would ask you, as the representative of the Ukraine strategic partner, what would the United States do in this situation?

SECRETARY BLINKEN:  Well, the most important thing to do is what we’re doing, which is to make sure that that doesn’t happen, that Russia does not make a very unfortunate decision to engage in any further aggression or reckless actions when it comes to Ukraine, which is exactly why we have spoken up very clearly when we saw this concentration of forces, why we’ve worked closely with all of our leading partners around the world, including at NATO and the European Union, so that everyone was very focused on this and was making it very clear to Moscow that we were looking and watching very carefully, and that if any action was taken, it would not be without consequences.  And at the same time, we’re working very closely with our partners here in Ukraine, as I said, to make sure that they have the means necessary to defend Ukraine, defend its territory, defend its people.

QUESTION:  Regarding the means, two recent statements made by Ukraine’s top politicians, Ukraine will request air defense system and anti-sniper attacks and U.S. should deploy Patriot missiles in Ukraine.  Is the United States considering any of this?

SECRETARY BLINKEN:  Well, we, of course, will look at any and every request.  And the main thing is that our Pentagon, our Defense Department, is the main partner for Ukraine.  And it is, as we speak, looking at what additional assistance, beyond the very significant assistance that we’ve already provided, including equipment, would be helpful to Ukraine right now.  That’s a very active consideration.

QUESTION:  Considering the fact that the threat is still there – yeah, you mentioned that there are still Russian troops in the annexed Crimea and close to Ukraine’s borders – does the United States consider an option of excluding Russia from SWIFT payment system?

SECRETARY BLINKEN:  I don’t want to get into hypothetical questions about what we might do in the future.  Let me just say simply that when it comes to trying to deter aggression or respond, we will consider every reasonable option.  Because as I said, we’re determined that this not – that there will – that it’s clear that there would be consequences in different areas.

But let me also say this, because it’s important:  We would prefer a more stable, predictable relationship with Russia and, indeed, President Biden has made that clear to President Putin.  But just as important – and we’ve been very clear about this – if Russia takes, continues to take reckless or aggressive actions, whether it’s with regard to Ukraine or anywhere else where our interests or our partners are being challenged, we will respond, not for purposes of escalating, not for purposes of seeking a conflict, but because these kinds of actions cannot go unanswered.  They cannot happen with impunity.  And so I think it’s very clear that there would be consequences.

But my sincere hope is that Russia understands that our preference would be for a more stable, predictable relationship, but ultimately that is up to Russia, by its actions or non-actions.

QUESTION:  Russian President Vladimir Putin in his recent address warned the West regarding – warned from crossing redlines.  Are there any uncrossable redlines for the United States towards Russia?

SECRETARY BLINKEN:  We don’t speak in terms of redlines.  It’s – what is clear is this, and this goes back to 2014 in many ways:  There are two things at stake when it comes to Russia’s aggression against Ukraine.  First and most important, what’s at stake are the rights of the Ukrainian people and their sovereignty, the integrity of their territory, their democracy.

But what’s also at stake are some very important larger principles that actually have effect well beyond Ukraine, and those principles include that the notion of having a sphere of influence is a concept that was – should have been retired after World War II.  We don’t accept the principle of spheres of influence.  The principle that another country cannot simply change the borders of its democratic neighbor by force; the principle that another country does not have the right to tell a country what its policy should be, with whom it can associate.  Those are principles that are at play here in Ukraine by Russia’s actions.  But they’re also relevant to many other parts of the world.  And if we allow those principles to be violated with impunity, then that is going to send a message not just to Russia; it’s going to send a message in other parts of the world as well that those – the rules don’t matter, that countries can behave any way they want, that might makes right.  That is a recipe for an international system that falls apart.  That is a recipe not for cooperation, but for conflict.  And it’s a very bad recipe that we are determined to stand against.

QUESTION:  We at Radio Liberty are also under pressure in Russia.

QUESTION:  Our Moscow bureau is almost at the edge of being closed because of this foreign agent law in Russia.  You already expressed concern on this regard, but how do you think is there a real chance to influence the situation?

SECRETARY BLINKEN:  We just had – as you know, I’m sure – World Press Freedom Day.  And we spent some time talking to journalists from around the world who are operating in countries where they are under – they’re under threat.  Their rights to practice journalism, to do so safely and openly, are being challenged by many different countries.  And unfortunately, we see that of course in Russia and we see that directly with regard to Radio Free Europe/Radio Liberty.

And what I can tell you is that the United States stands strongly with independent journalism.  It is the foundation of any democratic system, holding leaders accountable, informing people, informing citizens.  It’s very, very basic.  And I think that countries that don’t do that, that deny freedom of the press are countries that don’t have a lot of confidence in themselves or in their systems.  What is to be afraid of in informing the people and in holding leaders accountable?

So we’re going to stand – everywhere journalism and freedom of the press is challenged, we will stand with journalists and with that freedom.  And by the way, I’m on the receiving end sometimes of reports and commentary and articles that I may not appreciate in the moment.  But I will do everything I possibly can to stand up for the right of journalists to do their jobs, because the job that you do is profoundly important to the lives of our citizens.

QUESTION:  Thank you very much.  One last question:  Approximately 100 Ukrainian citizens are now in jail in Russia.  I mean, those people in Ukraine considered to be political prisoners; most of them are Crimeans, and one of these Crimeans, Oleksiy Bessarabov, yesterday addressed personally to you.  He’s now in jail in Russia, but he asked you and the management of the United States to influence somehow the process of the release of political prisoners, Ukrainians in Russia.  Do the United States have any opportunity to do this?  Because there were no exchange between Ukraine and Russia since last spring.

SECRETARY BLINKEN:  As a general matter, we are very concerned about the practice that some governments engage in of arbitrarily detaining the citizens of other countries, holding them hostage, or having political prisoners.  And this is something that we’re working with many other countries around the world to take a stronger stand against.  At the same time, if we have opportunities to engage another government on people that it’s holding illegally, we will certainly do that.  So if there’s an opportunity, we’ll take it.

SECRETARY BLINKEN:  Thank you.  Good to be with you.