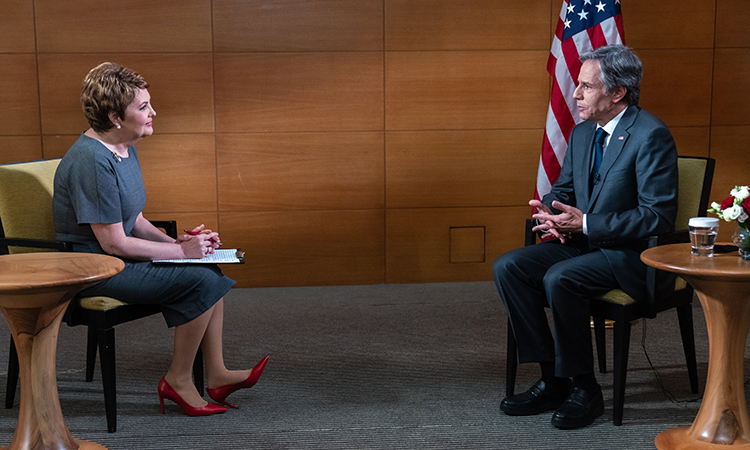 QUESTION:  Mr. Secretary, you arrived in Ukraine after the escalation in Donbas and accumulation of huge number of Russian weapons in our borders.  Russia is actually withdrawing them, but it’s not a reason to calm down.  What the support can Kyiv count in this situation?

SECRETARY BLINKEN:  Well, part of the reason I’m here at President Biden’s request is to make clear the United States’ strong support for Ukraine’s independence, its sovereignty, its territorial integrity, and to tell the Ukrainian people that we stand with them.  And part of that involves continuing to provide security assistance, advice as necessary, so that Ukraine can defend itself.

And I have to say we very much admire the restraint that Ukraine has shown in the face of Russian provocations and aggression – more forces built up on the border a few weeks ago than at any time since 2014, since Russia first invaded.  So we’ve been very concerned about that.  We’ve been watching it very carefully.  And we are doing everything we can to make sure that our support and assistance to Ukraine helps it defend itself if it has to.

QUESTION:  Is it possible to consider your visit as a clock check before a possible meeting between President Biden and Vladimir Putin maybe next summer?

SECRETARY BLINKEN:  Well, first, one thing that’s so important and that President Biden has made very clear to President Zelenskyy – because you know President Biden’s long involvement with and support for Ukraine and for the partnership between our countries – he’s made it very clear that we will never do anything about you without you.  And certainly, that comes to any conversations that we have with Russia.  So that’s another reason that I came here today, to give our analysis, give our assessment, and to hear from our partners here their analysis and assessment of the situation as well.

QUESTION:  After the situation in the east Ukraine got worse, many discuss – many discussion regarding Ukraine’s entry to NATO took place.  How is real this opportunity today?

SECRETARY BLINKEN:  Well, we’ve been very clear that NATO’s door remains open, and we made – NATO made commitments way back in Bucharest in 2008 in that regard.  And I think what we’re seeing now and we’ve been seeing in the years since is Ukraine working more and more closely with cooperative programs, but most important, on making the reforms necessary, making the investments necessary, on developing the skills necessary, because for anyone who aspires to NATO, the criteria involve making sure that you can meet the necessary standards and add to the alliance’s security.  And NATO continues to work closely with Ukraine, including through an annual program that’s very important.

QUESTION:  From the very first days of Biden administration, we understand that political against Russia will be a harsh policy, yes, and sanctions are against Nord Stream and regarding Navalny, continuation of that.  How do you think will this affect the situation in Ukraine somehow?

SECRETARY BLINKEN:  Well, to be clear, and – we would prefer a more stable, predictable relationship with Russia.  And in fact, President Biden has said exactly that to President Putin when they spoke on the phone.

On the other hand, we’ve been equally clear that if Russia continues to take aggressive or reckless actions, whether it’s with regard to Ukraine or anywhere else that threaten our interests, we will respond – not for purposes of escalating, not for purposes of getting into a conflict, but because we can’t allow Russia’s aggressive or reckless actions to go unanswered, to go forward with impunity.

So really, the decision is up to President Putin.  He can decide and Russia can decide by its actions to try to have a more predictable and stable relationship.  And part of that, I hope, would involve engaging realistically and meaningfully with Ukraine to end the occupation, to restore Ukraine’s sovereignty and territorial integrity, to restore the border.  But really, it’s up to Mr. – to President Putin and to Russia what direction they choose.

QUESTION:  Fighting corruption, judicial reform, openness of state processes – this is a well-known list of requirement for Kyiv from Washington.  How do you evaluate the quality and the pace of Ukrainian reforms?

SECRETARY BLINKEN:  Well, Ukraine faces two challenges:  It faces external aggression from Russia; but it also faces internal aggression from corruption, from oligarchs who put their interests ahead of the interests of the Ukrainian people.  And Russia uses that internal aggression for its own purposes as well.  So I think the Ukrainian people have a strong interest in reforming, in strong institutions, in transparency, in the independence of these institutions, so that they can do their jobs, including the anticorruption bureau, including judges and a strong judiciary, including the people who oversee the state-owned companies and enterprises.

And I would say there’s been some real important progress, including legislation on reforming immunities for parliamentarians, legislation protecting against people illicitly getting money, the land reform.  Those are positive.  But there’s clearly a need for more progress on things like corporate governance, on judicial reform, on making sure that the anticorruption bureau is truly independent.

And those reforms are important because, first, it’s for the Ukrainian people.  This will help them.  It will benefit them.  It will really give – make sure they are sovereign, not any outside actor or not any individual inside actors.  It’s also important because the international community, other countries, want to work with Ukraine, want to invest here, but they are also looking to make sure that the climate is as good as possible for those investments and for that engagement.

So we had good conversations with President Zelenskyy, with the prime minister, with leaders of the Rada about the reform program.  And we strongly support Ukraine’s efforts to do more and to pursue reforms.

QUESTION:  It is in the context of the Ukrainian reforms, the last situation in – at Naftogaz.  I mean, management change and violation of corporate governance.  What do you think this situation can impact to the investment climate and cooperation with IMF?

SECRETARY BLINKEN:  Well, honestly, it sent a bad message, a bad signal, and I think it had the potential to be damaging to Ukraine’s reputation internationally.  But I think – my own sense is that the government understands that and hopefully will move forward on corporate governance with Naftogaz but also with other big state-owned enterprises to make sure that that governance is independent, is transparent, and is looking out for the interests of the Ukrainian people.

QUESTION:  This autumn is 80th anniversary of tragedy in Babi Yar.  And I know this Holocaust topic is very important for Biden administration, so can we expect someone from Washington to this anniversary to Kyiv?

SECRETARY BLINKEN:  I think that’s very likely, and the Yevtushenko and the poem is something very powerful that many Americans know as well.  And I think it’s very important that that episode in our history be commemorated, never forgotten, and reminds us of our obligations today to protect the human rights of all people.

QUESTION:  And my last question:  I know you have roots from Ukraine, maybe in childhood somebody from your family tell you about Ukraine.  Do you remember something?

SECRETARY BLINKEN:  Well, my father’s father, my grandfather, was born here and lived here until he was six or seven years old – this is at the turn of the last century – and then went to the United States.  So – but he was too young to really, really remember.  His father, my great-grandfather, also is from Ukraine, but of course, I didn’t know him.  But I – my grandfather certainly talked to me about the roots that the family has here.

QUESTION:  Thank you and welcome to Kyiv.

SECRETARY BLINKEN:  Thank you very much.