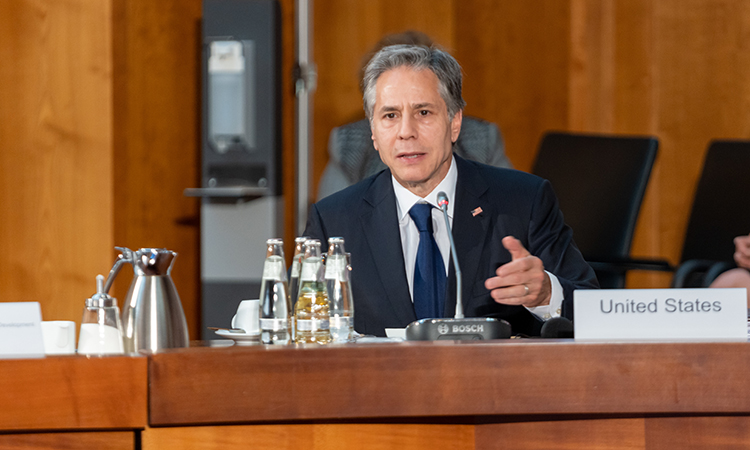 SECRETARY BLINKEN:  Annalena, thank you so much.  I guess our mail service was working better maybe than some of the colleagues, but I really want to thank you and thank Germany, for bringing us all together here in this place at this critical time.  And I’m very grateful to all the participants, but especially those from countries where people are bearing the brunt of this food crisis, and we very much look forward to hearing directly from you about what it is we can do together to more effectively meet your needs, the needs of your people.

We’ve heard about the numbers, and we’ve seen an accelerating crisis over the last few years. People living in acute food insecurity, that is when a person’s ability to consume adequate food puts their lives or livelihoods in immediate danger: 108 million people roughly in 2016; 193 million people last year according to the UN estimates.  Now, the World Bank calculates that Russia’s unprovoked war on Ukraine, long one of the world’s bread baskets, will add at least another 40 million people to the ranks of those who are severely food insecure.

So we know the drivers of all of this: climate, COVID, and now conflict with Russia’s aggression.  The Russian military is laying waste to Ukrainian farms and grain silos, stealing Ukrainian grain and the equipment needed to harvest it, blocking access to and from Ukrainian ports by the sea.  There are some 25 million tons of grain trapped in silos right now in Ukraine, where it will rot if it’s not exported.  Tens of millions more are being harvested in the coming months, but there’s no place to put them because Ukraine’s silos are full because it’s not able to move its grain thanks to the Russian blockade.

It’s very important that we be very clear about something, and Annalena said this earlier; I want to reinforce it:  When we imposed sanctions on Russia so that it would end its aggression against Ukraine as quickly as possible, we deliberately created exceptions for agricultural goods, for fertilizer, for insurance, and shipping necessary to move these products precisely to avoid worsening the food crisis.  Nothing – nothing is preventing food and fertilizer from leaving Russia, and only one country is blocking food and fertilizer from leaving Ukraine, and that is Russia.

Last month, as Annalena said, I convened a UN Security Council meeting and a ministerial to try to help galvanize further collective action.  One of the things we did was to create a global roadmap that commits countries to taking swift, concrete steps to get food to people around the world who need it now, and to build greater resilience to future shocks.  Ninety-four countries and counting have signed on to that roadmap.  So now, what’s our responsibility?  Our responsibility is to turn the commitments that countries have made – through the roadmap and other initiatives – into concrete, immediate action.

A few suggestions:  First, more countries need to step up with new substantial contributions to meet urgent humanitarian needs.  The work of critical organizations like the World Food Program, the Food and Agriculture Organization – their cost of doing business has gone up dramatically.  We need to help them fill some of these gaps.  Since the Russian aggression began in February, the United States has committed nearly $2.8 billion in emergency food assistance, including increasing our aid to countries and regions that were the hardest hit – in the Horn of Africa, Yemen, Lebanon, Haiti.  We have $5.5 billion in new funding for global food security and humanitarian assistance approved last month by the United States Congress.  We’ll be able to do even more in the weeks and months ahead, and you can expect further announcements of our additional support soon, including from the President at the G7 meeting.

Second, we have to accelerate efforts led by the United Nations to end Russia’s blocking of Ukrainian food exports through the Black Sea.

Third, we have to close the global fertilizer gap by both producing more fertilizer and using it more efficiently.  We know that if fertilizer is not getting to farmers, then yields will go down.  Yields go down; scarcity goes up; prices go up.  Fertilizer prices skyrocketed with the onset of the pandemic.  They shot up even further with Russia’s aggression.  Lack of access to fertilizer means many low-income countries are significantly reducing their production.  President Biden committed $500 million to boost our own fertilizer production and launched a global challenge to raise 100 million for new research on increasing efficiency as well as developing alternatives.

Fourth, governments have to resist the temptation to impose restrictions on the export of food and fertilizer.  Past crises have demonstrated that will only make the problem worse.

Fifth, we need to substantially increase agricultural capacity and resilience around the world.  This is something that I heard repeatedly when I hosted a meeting with African counterparts on the margins of our UN ministerial last month.  We’re hard at work at that both through individual efforts like our own Feed the Future initiative, which contributes a billion dollars a year to building capacity, and through leveraging investments through international financial institutions.

Sixth, speaking of those institutions, we very much agree that we need to follow up on initiatives within the international financial institutions to cushion food shocks and to give countries greater flexibility in what they do to make sure that they can feed their people.

Finally, we need to have greater information sharing and coordination to better identify needs and to be able to act efficiently to meet them.  That is one of the driving ideas behind the Global Alliance for Food Security, which we and other G7 members launched here in Berlin last month.

So let me conclude with this.  We hear all these numbers; we’ve all cited numbers of this growing food insecurity.  But what we know is this:  We know that those numbers are people, real people, real lives, real livelihoods, mothers, fathers, children.  And when you see, in Somalia, for example, a mother taking one of her children on an incredibly treacherous journey to try to find food somewhere for her child and the others that she’s left behind, and she makes it there and the child that she’s brought with her dies in her arms because she couldn’t get to the food in time – put your own kids in that position; put yourself in that position.  Just imagine.  As human beings, all of us have to be seized with this.  We see the suffering and we know we can do something about it.  So let’s get it done.