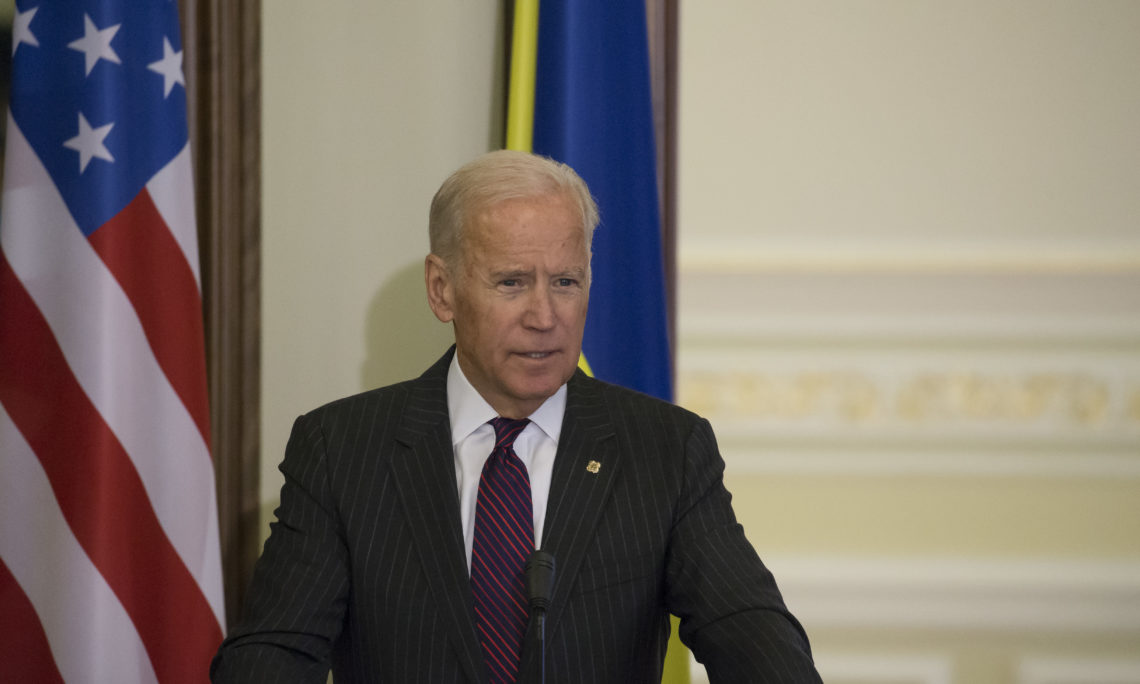 THE WHITE HOUSE
Office of the Vice President

THE VICE PRESIDENT:  Mr. President, I may have to call you once every couple weeks just to hear your voice.  (Laughter.)  This has been going on a long time.

Good afternoon, everyone.  It’s a great, pleasure to be once more here in Kyiv to reaffirm the depth of the partnership between our two peoples.  This is my sixth visit to Ukraine as Vice President and my fifth in the year since the Revolution of Dignity on the Maidan, which was an astounding thing to witness when so many Ukrainian patriots stood up and demanded a future that this country has been too long denied.

And I wanted to come here one more time on my last trip as Vice President to honor how much progress the people of Ukraine have achieved.  This year marks the 25th year since Ukraine gained its independence.  And the United States has been there to support and help you at every step of the way.  Our partnership has spanned four different American Presidents from across our political spectrum.  It has deep roots in both the Republican and Democratic parties.

As you saw a few weeks ago when two of my good friends from “the other side” — former Senate colleagues John McCain and Lindsey Graham and Amy Klobuchar, of my party — visited with Ukrainian troops on the front lines in the east.

And that’s because Americans and Ukrainians are united by deep bonds — our shared values and our common hopes for the future.  And the American people, including nearly 1 million proud Ukrainian Americans, understand that so much depends on your success, not just for Ukrainians, but for Europe and for the United States.

If you continue carrying your progress forward, then not only will you continue to build a more open, more democratic, more prosperous future that the Ukrainian people deserve, you will keep the international community united behind you in that effort.

And I hope the next administration will also want to be a supporter and a partner in your continued progress.  But as you know, no one else can do the hard work but the Ukrainian people.  It’s up to Ukrainian leaders and people to put the needs of the country above narrow personal interest, to place the general good above point scoring and local prejudices.  And that goes for everyone — members of Ukraine’s government; representatives of the Rada, who took an oath to serve the Ukrainian people as a whole; judges who undertake the responsibility to dispense justice equally; members of the media and civil society and ordinary citizens whose job it is to hold those in power responsible.

As I said last year when I had the great honor to address the Rada, “Each of you has an obligation to answer the call of history and finally build a united, democratic Ukrainian nation that can stand the test of time.”

You’re well underway to do that, Mr. President.  So I wanted to thank you, Petro, not only for your leadership but for your friendship.  I shared the same sentiment earlier this morning when I met Prime Minister Groysman earlier today.  As a nation you’ve made a lot of very difficult decisions.  And many more difficult political choices remain ahead.  But there is no denying the progress that Ukraine has made since the Maidan.  Together with a dynamic generation of Ukrainians committed to reform, you’ve begun to overhaul your government, your economy, your entire political system.

In the year since my last visit, you continue to meet the reform requirements in the IMF assistance package.  You’ve strengthened the country’s banking sector.  You protected Ukrainian depositors by nationalizing Privatbank.  You implemented a groundbreaking, new electronic-asset-declaration system to fight corruption, which will help ensure that officials cannot leverage their political positions for personal gain.

Your national anti-corruption bureau and the special anti-corruption prosecutor are providing and proving their impact when they have the resources.  And it’s imperative that you continue to strengthen all of your anti-corruption institutions to root out those who would return Ukraine to rule by cronyism and kleptocracy.

Thanks to the vital steps you’ve taken, your economy is now growing again.  But there remains much work to be done to ensure Ukraine finally realizes its potential as a vibrant, modern economy.  Keep working with the IMF to implement the tough reforms that will make Ukraine’s economy sustainable.  Continue cleaning up the banking system.  Press forward with energy reforms that are eliminating Ukraine’s dependence on Russian gas.  Work to privatize state-owned enterprises transparently.  Create a business environment with responsible, legal, and regulatory systems that make Ukraine a destination for investment.  None of this will be easy.  None of what you’ve done so far has been easy, but you’ve done it.  And we know it’s going to be hard to continue to finish the job.

You’re fighting both against the cancer of corruption, which continues to eat away at Ukraine’s democracy within, and the unrelenting aggression of the Kremlin.

Russia’s continued attempts to undermine your success, your security, your sovereignty, and your territorial integrity are manifold.  False propaganda attacks.  Attempts to destabilize your economy.  Ukraine, like every country in Europe, has a right to determine its own path.  Yet Russia seeks to deny that choice.  And the international community must continue to stand as one against Russian aggression and coercion.

There are over 1.7 million internally displaced people Oppression of Crimean Tatars continues.  More than 9,600 Ukrainians have been killed in the fighting in the east and more than 22,000 wounded in the conflict.  And fully one-fifth of those victims have been civilians.

That’s why in addition to the $3 billion in loan guarantees and the $750 million in assistance to fortify your economic resilience, the United States has provided $600 million in security assistance.  We’ve trained your national guard, conventional military forces, as well as special forces; helped you increase your readiness and make your force interoperable with NATO; provided armor, radars, night-vision devices, medical equipment — all of which has saved lives and bolstered your defenses.

Although I know how — you find this difficult to keep faith with the Minsk process when the Russians refuse to meet their security commitments, it remains the only viable framework for resolving the conflict in the Donbas, restoring Ukrainian governance in the east, and returning control of the international border to Ukraine.  It’s Ukraine’s best hope to move forward as a united country.

But let me be perfectly clear, the political agreement cannot be implemented until Russian violence stops.  Only after Russia and its proxies in the east fulfill their obligation to end the fighting and let the Donbas again enjoy peace and security can Ukraine be expected to fulfill its political commitments.

Your self-determination, your freedom from coercion, your success as a liberal democracy are all essential in realizing this objective.

So I strongly urge the people of Ukraine:  Keep demonstrating your commitment to the rule of law; keep fighting corruption; insist on transparency; investigate and prosecute government officials who siphon off public funds for their own enrichment.  Russia over the last decade or so has used another foreign policy weapon.  It uses corruption as a tool of coercion to keep Ukraine vulnerable and dependent.  So pursue those reforms to root out corruption.

But the Ukrainian people are like the American people, they never give up.  And one of the things that gives me the most hope for the future is the incredible energy and passion of Ukraine’s young people.  I’ve met with them on each of my previous visits here.  And I have no doubt that they will inspire, demand, and ultimately succeed in attaining the Ukraine that has been sought for for so long.

On a personal note, Mr. President, I want say what a privilege it has been to support and stand with Ukraine over these past 25 years — first as a senator and of late as Vice President.

I’ve been inspired by your people, their courage, their resilience, brave Ukrainians who never gave up hope for a future of something better, who get up and go to work every day for a democratic and united Ukraine.

And if you can continue to make progress, Mr. President, if you keep doing the hard work and making the difficult choices to put Ukraine first, I promise you the American people will stand with you.  This next year is going to be a very, very telling year — a very telling year.

I’m looking forward to seeing what our nations can build together, Mr. President, over the next 25 years and beyond because as my grandfather would say, with the grace of the God, and the good will of the neighbors, which we can’t count on very much in this neighborhood, we can get this done.  But it all depends on the willingness of your people to continue to insist on what they deserve because they deserve it.