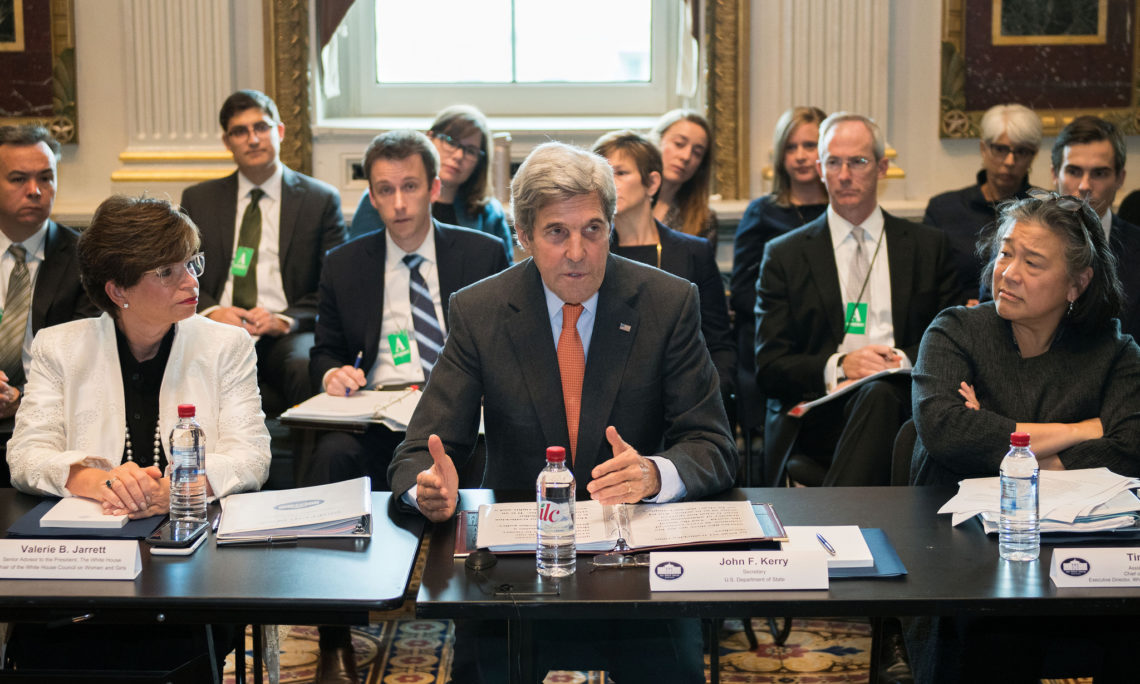 Well, thank you, Valerie. Thank you very, very much, and my apologies to all for being a moment late. But let me second what Valerie said with respect to the efforts of everybody. This is our last meeting, as she mentioned, and I have to say that over the four years of this effort, I’m personally really grateful for and impressed by the extraordinary distance we have traveled here. This all-of-government effort has really been very, very significant. Everybody here has contributed significantly in their agencies, and I think this Administration can be extraordinarily proud of what we have done to raise the profile of this challenge and to have an impact on countries all around the world. So I hope everybody feels positive about that, because I think we ought to.

Human trafficking is one of the few issues that we face, all of us, on a day-to-day basis in governing where there’s no – unlike a lot of other issues that are clouded by nuance or a kind of complexity, this is not complex except in the execution of the things we know we have to achieve. And there certainly is no nuance whatsoever. There’s a moral clarity here that’s as firm as you could have on any kind of issue. And needless to say, the notion of modern-day slavery is one that touches everybody’s conscience and it is one of just fundamental, basic human decency.

So I think that there are daily threats that are unfathomable that some people live with in some part of the world, whether it’s a pregnant woman who had a miscarriage on a factory floor and then was forced – this is outside of Bangkok – and she was forced to keep peeling shrimp for the next four days, or a fishing crew in Eastern Europe that was coerced into working up to 22 hours a day knee-deep in freezing water, or young women and girls who fled their homes as refugees only to be victimized by large sex trafficking rings elsewhere. Stories like these are common. They’re the everyday stories, unfortunately, and the moral urgency of addressing this issue is what has spurred everybody around this table and a lot of people who aren’t here today to action.

But I want to be clear: This not simply a question of right versus wrong. It’s in our strategic interest as well to ensure that this fight is a priority of our foreign policy. And the fact is that human trafficking is a multi-billion-dollar criminal enterprise. It’s assault on human rights and is – it’s a threat to global stability. It undermines the rule of law, it breeds corruption, it spreads disease, it widens the gap between the haves and the have-nots, and it tears whole families apart. So it’s counter to every single thing that we are trying to accomplish in the field of development and everything that we would like to see in our communities and in communities elsewhere in the world as we try to live up to the 2030 development goals.

So we all have an interest in succeeding, in winning this battle and in making sure that the perpetrators of these crimes are brought to justice. So I think that this Administration, as I said earlier, has done an exceptional job of creating the urgency around this issue that it deserves.

President Obama issued a critical executive order to ensure that no federal contract contributes in any way to human trafficking. It’s why in this year’s TIP Report the State Department is calling on every government in every region develop a better understanding of the needs of at-risk populations and to adopt strategies to reduce their vulnerability and keep them safe. And I will comment that today – what we learned last year is that if we engage with countries two or three months out, we can have a major impact on getting them to kick in to meet what we see is becoming a challenge in the reports. And today, I urged everybody to begin that process with the next administration promptly in January and February so that we double our effort to get ahead of that curve.

We’re gearing up now to implement the recommendations of the Advisory Council’s first annual report, which called for improved outreach on prevention and victim identification. And last month at Our Ocean conference, the State Department committed to invest more time and money than ever before in fighting forced labor in rogue elements of the worldwide fishing industry.

So the bottom line is we’ve been making steady progress to drawing attention to the crime of trafficking, we’re mobilizing resources unprecedented to fight it, and obviously, I hope everybody here will make sure that we’ll make the efforts necessary to make further gains and build on the past successes.

So I hope today we’re not just going to take stock, but we’re going to push harder across the board, that we keep the momentum going, and ensure that this critical work leaves the next administration with the best starting point that anybody’s ever had, and I’m absolutely confident that that’s going to be the case. So thank you. And with that, I think we turn now to Susan Coppedge to give us a update on the work of the Senior Policy Operating Group.