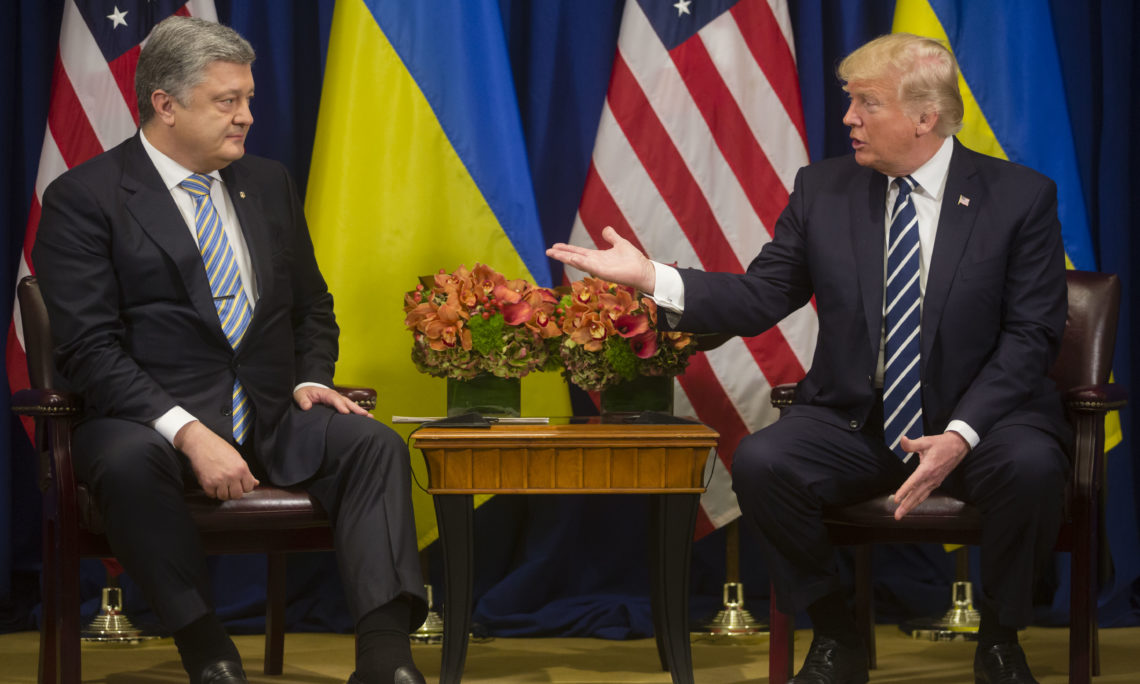 The White House
Office of the Press Secretary
For Immediate Release
September 21, 2017

PRESIDENT TRUMP: Thank you very much. It’s wonderful to have President Poroshenko with us. We spent some time recently in the White House, and I know you’ve made good progress since then — a lot of progress, actually. And I wouldn’t say it’s the easiest place right now to live, but you’re making it better and better on a daily basis. And I do hear very, very good things.

So Ukraine is coming along pretty well — pretty well. And at the borders, maybe you’ll tell them how you’re doing.

Thank you. Thank you for being here.

PRESIDENT POROSHENKO: Thank you very much indeed, Mr. President. That’s a real great honor for me to be here in the city which is so close to you. And I’m really happy to hear the words about the progress we both demonstrate after our last meeting.

But first of all, I want to respect the great sympathy and solidarity with the American people because of the consequences of the hurricanes, and my admire with your very strong leadership in this hard time.

And I really think that our cooperation, both in the security and defense sector, which is bringing already the first important results under your leadership, and the second, we seriously improved our economic cooperation.

I just mention one single figure: The turnover between the United States and Ukraine during the last seven months increased 2.5 times because of the implementation of our agreement. And this is, again, the symbol that we welcome in American companies in the Ukrainian market, and creating hundreds of thousands of jobs both in Ukraine and the U.S. And this is really a delivery from effective cooperation between our nations.

PRESIDENT TRUMP: Well, that’s right. That’s a story that is pretty untold, but I think you’ll see it more and more. But companies are going very strongly right now into the Ukraine. They see a tremendous potential there, so take good care of them. Okay? Take good care of them.

I do want to report that, with the hurricanes, we spoke with Greg Abbott, Governor of Texas, and I will tell you, Texas is doing really, really well. Those people are working hard and effectively, and you have a great governor. And Texas is really coming out of that horrible Hurricane Harvey really, really well.

Florida, very similar. Great governor, Rick Scott — spoke with him. Florida was — I mean, they were hit hard, they were hit hard. But they’re doing very, very well. Ahead of schedule. The power is back on — almost, for the most part, outside of the Keys where you have a devastation problem, but even there we’re working very hard. But Florida is doing really well. So Texas, Florida, we give it an A-plus.

Puerto Rico was absolutely obliterated. Puerto Rico got hit with winds — they say they’ve never seen winds like this anywhere. It got hit as a five — Category 5 storm — which just literally never happens.

But it is — in fact, you just — all you have to do is read or turn on the television and you’ll see a place that was practically leveled. It’s incredible, the power of that wind. That was a very unique — not for many decades has a storm hit a piece of land like that.

So Puerto Rico will start the process. With — we have actually Tom Bossert is with us in the other room. We’re just talking about it. We’re going to start it with great gusto, but it’s in very, very, very perilous shape. Very sad what happened to Puerto Rico.

So that’s just an update on the three primary areas. Virgin Islands are — I don’t even have to say; all you have to do is take a look at a picture. They are flattened. Areas around there have been flattened. So these were storms that they haven’t seen in many years. It’s very sad actually, to see it. But we will start the process. As we’ve proven, we have incredible teams.

has been beyond — who would’ve thought after Texas, they go to Florida, then they go to Puerto Rico, and they go to other places too. Louisiana took a little bit of a hit and they recovered really well. They’ve done a fantastic job in Louisiana. Alabama took a hit but they recovered. Alabama has been fantastic. So many people went to Alabama during the storm — during the Florida storm, and likewise Georgia.

So many places were so incredible in the way they’ve handled it. So we are going to start the process now with Puerto Rico. We’ll have further updates on it, but it was one of the most serious storms anyone has ever seen.

Thank you all very much.

PRESIDENT TRUMP: Yes, I will.

PRESIDENT POROSHENKO: We have a brilliant operation with the United States and security and defense sector. Definitely, and we very much satisfied with that.

PRESIDENT TRUMP: Thank you very much, everybody.