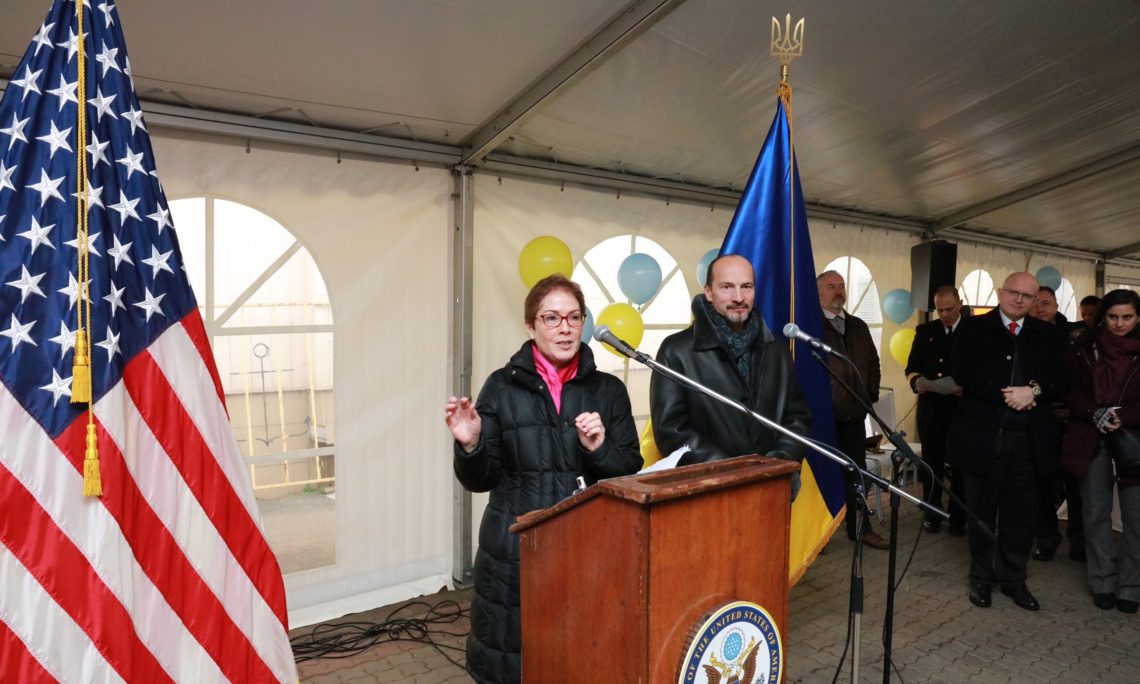 So, I’m very aware that I’m all that’s standing between you and the party.

But I wanted to say thank you to everybody and I’m not going to name everybody, don’t worry.

But I do want to thank all of our Ukrainian colleagues and friends, who have come from all over Ukraine and represent many different political points of view.

But if there is one thing that brings everybody together under this tent, it is that all of us, and all of you, believe in a free and independent Ukraine.

And that, as the Minister [Klimkin] just said, is something that is worth fighting for.

And I think that the official ship visit of the USS Donald Cook and all of us here together is an important message that we are standing together.

And I think with our friends here from Europe, I think it’s appropriate for me to quote what has now become an iconic speech, even though Donald Tusk only gave it one week ago:

“Ukraine is not alone” and we all support Ukraine.  We stand unified against Russia’s aggression and we stand unified in supporting Ukraine’s transformation agenda.

So again, thank you for your support, your partnership.

Thank you, Commander Powel.  Thank you for the invitation, for this reception, but most of all, thank you for bringing the USS Donald Cook to Ukraine.

And thank you to the men and women who serve under you; you do an extraordinary job for the United States and for security around the world.

We have a number of distinguished visitors here today.  I would like to introduce them briefly, if possible.

First, I would like to point out the Foreign Minister of Ukraine, Mr. Pavlo Klimkin.

The Ambassador of the United States to Ukraine, Masha [Marie] Yovanovitch.

We have the Ambassador of the United States to the European Union, Mr. Gordon Sondland.

Now, this ship visit is a symbol of the United States’ commitment to Ukraine’s sovereignty and territorial integrity.  It’s a symbol of our support for the principle of freedom of navigation, it is a recognition of our belief that we need to support peace and security and stability throughout the Black Sea region.

And it’s a symbol of our support for the Ukrainian people, as they build a strong democracy and market economy, and build their relationship with the transatlantic community.

But this is not only an American commitment, and that is why we invited with us today friends, representatives from the European Union.

And representing the Presidency of the European Union, we have the Vice Prime Minister of Romania, Ms. Ana Birchall.

We have the Deputy Secretary General of the European Action Service, Jean-Christophe Belliard.

We also have the Permanent Representative of Poland to the European Union, Andrzej Sados.

And from the Cabinet of the High Representative for European Foreign Security Policy Federica Mogherini, we have Mr. Jani Taivalantti.

We were joined a few moments ago, for meetings here, the President of Ukraine was here – President Petro Poroshenko, the Defense Minister Poltorak, and of course, Minister Klimkin is still here with us.

So with that, I would like to turn the floor over to a couple of our other distinguished visitors.

But I want to thank all of you for coming and thank you for sharing this moment with us — celebrating the partnership between the United States and Ukraine and our support for Ukraine’s freedom, its sovereignty, its independence, its territorial integrity.

Ambassador of the United States to the European Union Gordon Sondland

Thank you, Ambassador Volker and Ambassador Yovanovitch for your wonderful hospitality.

I flew in last night with my colleague, Jean-Christophe Belliard, the Deputy Secretary General of the European External Action Service, as well as a senior team of EU member state officials, and my good friend, Vice Prime Minister [of Romania], Ana Birchall, and my friend Andrzej Sados of Poland.

As I look out at this audience this afternoon, I see colleagues from Brussels, Washington, and Kyiv, working in concert to ensure Ukraine as a successful, stable, and strong democracy of the Euro-Atlantic family.

I see the unity in our purpose and the strength of our resolve to counter Russian aggression here on the shores of the Black Sea and to support the independence and territorial integrity and the European orientation of Ukraine.

At home in Brussels, my mission works toward the goal as a priority, in close partnership with the EU and member states.

Foreign Minister Klimkin and I are in close regular touch on Ukraine’s path toward reform and energy independence.

I also appreciate the EU’s leadership in supporting Ukraine and in fact, just last week, European Council President Donald Tusk visited Ukraine to commemorate the fifth anniversary of the EuroMaidan Revolution of Dignity.

So in Brussels, as in Washington, and in Kyiv, we will continue to stand in solidarity with Ukrainian partners against these unacceptable acts of aggression.

Most of all, I want to thank the European Union for joining us.

There are those doubters who think that the transatlantic alliance between the United States and the European Union is beginning to unravel and nothing, nothing could be further from the truth.

When it really counts, we stand together and that’s why we’re here today.  Thank you very much.