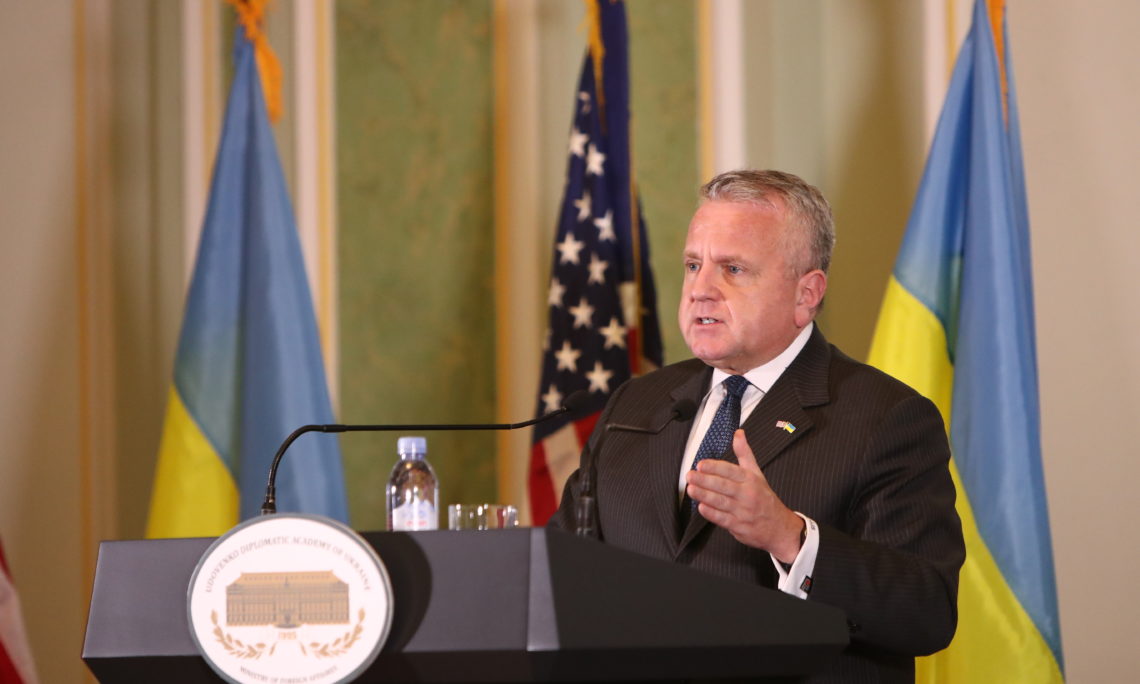 Those memorials remind us that, for four years, Ukraine has struggled against a corrupt and authoritarian past, while at the same time battling against an external aggressor. Since the revolution, the United States has looked for ways to honor those sacrifices and to help all Ukrainians build a better future. Because both struggles are far from over, and Ukrainians deserve and expect more than what has been achieved so far, I would like to offer some thoughts on key U.S.-Ukrainian priorities in the months ahead.

It was a hundred years ago that the Rada declared Ukraine a sovereign, independent state. Now one hundred years later, I am honored to be here to affirm the United States’ unwavering support for an independent Ukraine – one that is stable, democratic, prosperous, and free. We remain committed to restoring Ukraine’s territorial integrity and ensuring the safety and security of its citizens.

Russia’s attempted annexation of Crimea and its invasion of eastern Ukraine are an attempt to cast doubt on Ukraine’s sovereignty, Ukraine’s unity, and the choice the Ukrainian people made to embrace Western values and Western institutions. Russia tries to justify its actions by saying it is defending Russian-speaking people, but its aggression has been disastrous for the people living in those regions. Russian speakers are suffering more in Donbas and Crimea than anywhere else, as a direct result of Russia’s actions. Many Russian-speaking Ukrainians are dying while fighting to defend Ukrainian territory and sovereignty against Russian troops and proxies in the Donbas. The UN reports that food insecurity among eastern Ukrainians, including Russian speakers, has doubled to 1.2 million in the last year, and 3.4 million people are critically in need of assistance.

Paradoxically, the Russian aggression designed to divide Ukraine has created great unity of spirit among the Ukrainian people, while deeply damaging Russia’s own reputation and standing in Ukraine – and on the world stage. And it’s cost Russia significant resources that would have been better dedicated to the welfare of its own citizens.

To advance these fundamental goals, Secretary Tillerson appointed Ambassador Kurt Volker as Special Representative for Ukraine Negotiations in July of last year. And his mandate is to break the deadlock with Russia over Ukraine. Secretary Tillerson has made it abundantly clear that Russia must take the first steps to de-escalate violence and resolve this conflict by fully implementing the Minsk Accords.

In 2016, Ukraine adopted a Strategic Defense Bulletin which provides a roadmap to NATO interoperability. The Rada will soon consider a draft law on national security, which would establish a defense and security sector in line with Euro-Atlantic principles and provide the legal basis for implementing Ukraine’s Strategic Defense Bulletin. It’s important that the Rada quickly adopt the Law on National Security that strengthens civilian and democratic oversight of the defense and security sector. Adopting such a law will deepen Ukraine’s alignment with Euro-Atlantic standards and help provide Ukraine with a professional, sustainable defense force capable of fully protecting Ukraine’s territorial integrity.

But even as Ukraine’s soldiers and diplomats fight for the country’s sovereignty and territorial integrity, there is another critical priority for all Ukrainians: fulfilling the dreams of the Maydan for a better, brighter future that is free of corruption.

The Ukrainian people expect Ukraine’s leaders to answer this call. The American people do, too.

A stable democratic, prosperous and free Ukraine will be less vulnerable to external threats and serve as a beacon to other nations facing Russian aggression. A free and economically successful Ukraine is one of the Kremlin’s biggest fears – and it is the Ukrainian people’s greatest hope. The United States has invested in Ukraine’s success by providing more than two billion dollars in assistance to achieve this. We support Ukraine because the United States believes Ukraine has great, untapped potential, and it is our interest that Ukraine become a successful, stable, secure, prosperous European nation.
We want you to prove your detractors wrong: to show that future elections are not an excuse to pause reform; that Ukraine will not allow itself to be divided by disinformation or divisive rhetoric; and that Ukraine will not be tempted into the false choice of stability or liberty. Ukraine can and must have both.

If Ukraine successfully wages a campaign to defeat corruption, it will disprove Russian propaganda depicting a failed Ukraine. We encourage you to push back against a corrupt and authoritarian past. Do not accept business as usual. Because you deserve better.

Ukraine’s fight against corruption is no less essential than its fight against Russian aggression. These two struggles are two sides of the same coin. Prevailing in both is a matter of national security. It is absolutely critical for Ukraine to press forward with deep, comprehensive, and timely reform.

Corruption eats away at the fabric of Ukrainian society in several ways:

• It deters foreign investment and drags down GDP.
• It discourages economic initiative and entrepreneurship.
• It robs the state of tax funds paid by hardworking Ukrainians to line the pockets of the powerful.
• It breeds poverty.
• And, it crushes the hopes of those who play by the rules.

Fighting corruption is about fighting for a just and prosperous future for this country. It’s about creating a thriving, self-sufficient market economy, based on the rule of law for the benefit of all Ukrainians and to attract foreign – and domestic – investment that creates jobs. Winning the fight against corruption is the only way Ukraine will truly be prosperous and free.

The Ukrainian government must implement reforms to ensure that all are equal before the law; that’s what “dignity” means. Ukraine’s success in strengthening the National Anti-Corruption Bureau and the Specialized Anti-Corruption Prosecutor’s Office could not be more important. These independent, anti-corruption institutions are instrumental to defeat graft, and they need to be well-resourced and protected to do so. Ukraine also needs a genuinely independent Anti-Corruption Court – one that is fully compliant with Venice Commission recommendations.

An independent and successful Anti-Corruption court is fundamental for Ukraine. But Ukraine must also stay on track with its IMF program. The signal a successful IMF program sends to the international community is that Ukraine is serious about reforms. Serious about fighting corruption, serious about privatizing state owned enterprises, serious about energy reform, serious about maintaining economic stability and creating the growth and investment it needs to cultivate and care for its most valuable resource: the Ukrainian people.

We applaud you for taking bold education, healthcare, and pension reforms in recent months. Change is always difficult. Sometimes it can even be scary. But these reforms will deliver tremendous value to the people of Ukraine, and will help them build the kind of country they yearn for.

We also applaud the adoption of reforms deregulating certain business sectors and increasing tax transparency. However, deeper reforms are needed to lift the economy over the long-term. And comprehensive judicial and law enforcement reform, which Ukraine has embarked on is the key. I’ve already mentioned the Anti-Corruption reform. Also vital is establishing a fully empowered body to investigate financial crimes.

The Prime Minister just told me about a package of over 30 new draft laws that he expects will improve the business environment once implemented. That’s good for the economy, and it should create better jobs. Ukrainian people expect Ukraine’s leadership to live up to its own promises to achieve the reforms that will allow Ukraine to move toward implementing the promise of the Revolution of Dignity.

The task at hand requires contributions from all of society – not just those in elected office. And yesterday’s anniversary is a good reminder of how this started: the Revolution of Dignity happened because of the bravery and leadership of ordinary people, and of civil society.

Outside the halls of power, the vibrant civil society in Ukraine must play a prominent role in leading the country into the future. Ukraine needs a civil society that continues to be active by contributing to policy, holding authorities accountable, and demanding the institutional architecture for long-lasting reforms.

But it is important to remember that while civil society plays an important role, civil society is not the government. Civil society activists, no matter how prominent, do not control the government resources and should not be mandated to participate in the e-declaration system, which was set up to hold government officials – those who are responsible for state resources – accountable to citizens and taxpayers for their actions.

For Ukraine to be a successful democracy – strong and secure – it needs a robust civil society that will work in tandem with the government.

In conclusion, I want to underline that the United States stands with the people of Ukraine in your fight for security and the integrity of your system of governance.

We encourage Ukraine’s leaders to renew their commitment to uproot corruption, and we urge its people, and most critically, its young people – all of you – to keep fighting for a strong and democratic Ukraine – one where liberties are protected and where economic growth and jobs will flourish.

On this fourth anniversary of the Revolution of Dignity, we look back to honor the sacrifices Ukrainians have made and look forward to the progress to come. We believe in the change that is happening across Ukraine, and we look forward to continuing our partnership, and working with the leaders and citizens of this great country to deliver the bright and enduring future Ukraine’s people deserve.