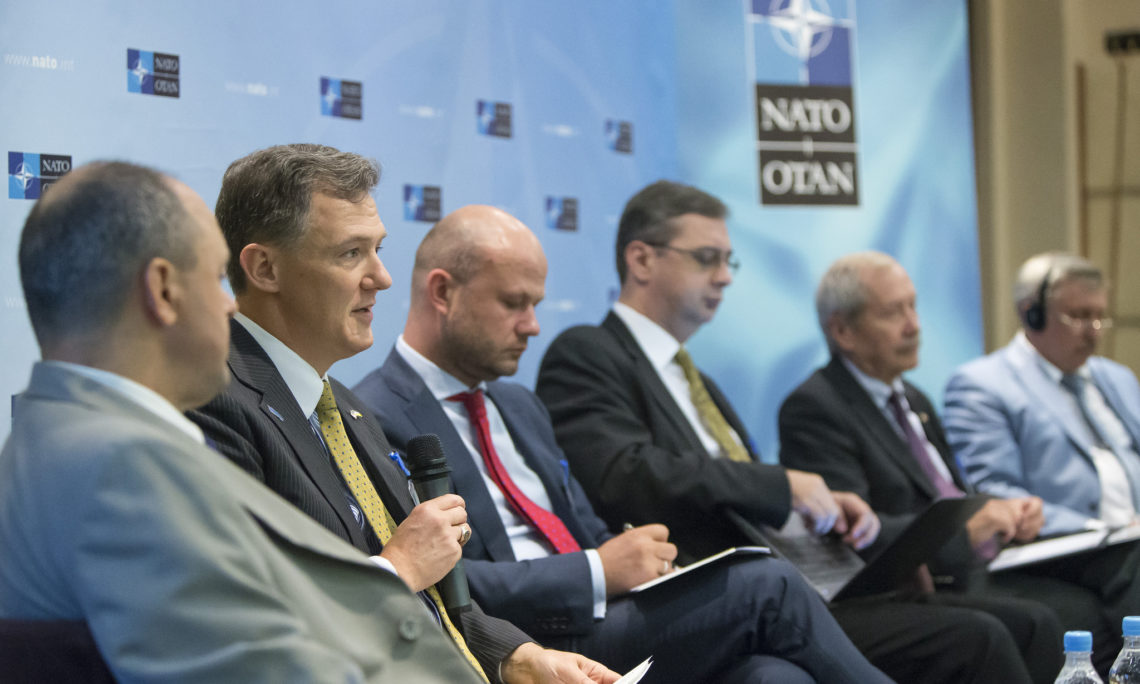 Thank you very much, Leonid, and to the Center, for hosting this conference.

I know you’ve already had a number of distinguished Ukrainian speakers earlier today looking at the results of the Warsaw Summit thru the lens of Ukrainian interests.  I regret missing their comments.   I will share some thoughts on the wider security environment, and what NATO is doing to counter current threats, through deterrence and projecting stability.

The strategic goal for the alliance remains the same:  A Europe whole, free, and at peace.

As the world changes and threats evolve, our nations are more secure when we stand together.  NATO members are more than just military allies and Article 5.  We are united by our enduring commitment to shared values — democracy, pluralism, and inclusive societies strengthened by our rich diversity of backgrounds and faiths.

Russia’s occupation of Crimea in 2014, and subsequent aggression in Donetsk and Luhansk, transformed the strategic security environment of Europe in the first major shift since the breakup of the Soviet Union 25 years ago.

As President Obama said in his news conference in Warsaw: “This is a pivotal moment for the alliance.”  If that word sounds familiar, you may recall when President Obama came into office 7 years ago, the U.S. administration talked about a “pivot” to Asia.  The current focus on events in Europe is crystal clear.  He continued: “In the nearly 70 years of NATO, perhaps never have we faced such a range of challenges all at once — security, humanitarian, political.”

Thus, we are not merely talking about a clear threat from a more aggressive Russia.  The new security environment is not a simple return to the 20th century Cold War East vs. West dynamic in NATO’s early years.

There is also the growing threat from transnational terrorist organizations based in northern Africa and the Middle East, as well as the destabilizing force of mass migration.  We have seen over the past year that terrorist groups, including ISIL, have the ability to strike at the heart of Europe, even as their zones of insecurity in the Middle East have led to unprecedented waves of migrants fleeing conflict.   Cyber attacks threaten Allied infrastructure as much as Ukrainian infrastructure.

On Deterrence – preventing new conflict, not provoking it

The core of the “new security environment” in 2016 and NATO preparedness reflect Russian actions in Ukraine, and the fear that Russia may repeat such actions within the territory of  NATO countries.  NATO’s Readiness Action Plan includes the tripling in size of the NATO Response Force with a brigade-sized high-readiness spearhead force at its core able to move within in a matter of days.

In Warsaw, the Allies agreed to enhance their force posture up and down the eastern flank of the Alliance that borders Russia.

To the northeast, in the Baltic Sea region, we have agreed to rotate four battalions to Estonia, Lithuania, Latvia, and Poland in enhanced forward presence.  All four allies have long requested deployments for their defense, long seen by other members as not necessary.  The threat environment has changed, and so has our posture.

To the southeast, the Black Sea region, NATO also agreed to create a new multinational brigade that we hope will become operational in the coming years.

Finally, NATO agreed to the creation of a 13,000- strong NATO Rapid Reaction Force, stationed in Spain to be sure, but one that could be deployed to the eastern flank of Europe in a matter of days to deter an offensive from Russia.  It is not just deterrence that NATO is seeking to enhance, but rapid deterrence.

On Projecting Stability Beyond NATO’s Borders

The other key theme of the Summit was projecting stability beyond NATO’s borders.  While events in Ukraine were a clear primary driving force, the Summit also considered transnational threats from northern Africa, the Middle East, and Afghanistan.

I’ll stop there and leave more time for questions and answers.