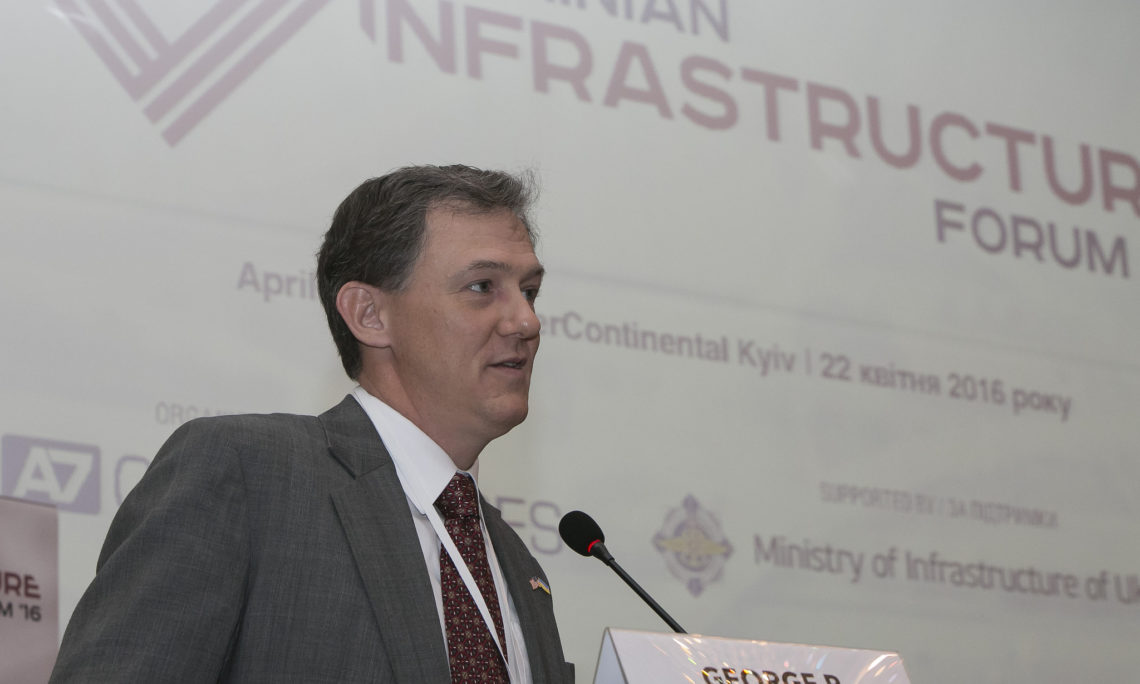 Allow me to continue in English.  I would like to congratulate you, Minister, on your appointment.  We’ve worked closely with you in the past, and we look to continue to build on that in your capacity as Minister.

I think it’s no secret to all of us here that one of the most important areas for investment in Ukraine as it works toward further integration into Europe and expanding its economy is modernizing the country’s infrastructure.

My previous diplomatic assignment was in Thailand.  In some ways, Thai infrastructure is better than the United States’ infrastructure, and I think it’s clear, as a country is trying to develop, how critical modern infrastructure and transport networks are.  Doing so creates growth, it creates jobs, it helps ensure Ukraine’s energy security.

By any measure, Ukraine has tremendous transportation potential.  You lie across four great transport routes – and that is a lot of what is discussed in Asia as well – Thailand is at the crossroads of Asian transport corridors.  There is Helsinki to Odesa, Berlin to Kyiv, Venice to Lviv, from the Baltic Sea to the Black Sea.

In that sense, Ukraine’s rivers and rail, as the Minister mentioned, as well as roads and airports, should be the backbone of the economy, and it’s important they receive the care, attention and investment that they deserve.

It’s our view that by investing, upgrading and modernizing Ukraine’s networks of waterways, railways, airports and highways, Ukraine can successfully meet the challenges of creating a modern economy and developing a better life for its citizens.

I think it’s important to note that other countries’ experiences have shown that simply signing a free trade agreement, like the Deep and Comprehensive Free Trade Agreement with the European Union, is not enough to unleash a country’s trade potential.

In a competitive global market, transit costs and transit times are decisive factors in determining whether a country is competitive.  In some locations, the quality of transportation infrastructure accounts for as much as 40 to 60 percent of a company’s total transit costs.

When I was in Thailand, many multinational corporations chose Thailand over countries like Vietnam, that have wonderful human capacity potential, because of Thailand’s ports, its use of waterways, its rail and road network.  And that timing, the just-in-time production philosophy of many companies, not just Japanese, is critical in relying on infrastructure.

Those companies, which can deliver hundreds of millions of dollars of investment, jobs and growth, will not invest where the roads are not passable, where there’s poor port infrastructure, where there are bureaucratic requirements, inadequate handling capacity, or inflated and distorted tariff structures.

And I think that’s why it’s so important that some of the changes that Minister Omelyan talked about go forward.  Because improving the quality and efficiency of the transportation infrastructure, and improving the rules, will determine whether Ukraine is able to take advantage of the substantial benefits that it could have under its Deep and Comprehensive Free Trade Agreement.

Investing and modernizing infrastructure will also send a signal to not only Ukrainians, but to the rest of the world, that there is true change that everyone can count on.

And again, modern railways, modern inter-waterways, good roads, bridges, should be sources of national pride, not embarrassment.  From a tourist point of view, when they come to Kyiv, they see a beautiful subway system, the Vokzal, some of the bridges as landmarks – impressive works of both art and engineering.

As a diplomat, I know that many foreigners, when they go to countries, they talk about the roads as a signal for how a country is doing.  And I don’t need to tell you that driving on some of Ukraine’s roads, what sort of impression that leaves.

I think modernizing the roads and highways is very important, whether it’s concessionary as was mentioned by the chairman, or other ways, to help speed the flow of people, goods, and services not only within Ukraine but across borders.

I think also, though, as all of you know, for large-scale movement of goods, waterways and rails are much more important in that regard.

I think as we were talking – Ambassador Pyatt is not here in Ukraine this week – about what our message to you all today would be, is the need to really launch the modernization process.  Delay does have consequences.  So the importance of updating the legislation, to go forward with privatization are critical so that over-planning and over-legislating does not prevent progress.  As we say in English, not letting the perfect be enemy of the good.

From our discussions with users, funders, and regulators of infrastructure, we hear basic agreement on what needs to be done.  First, Ukraine needs to implement fair and transparent tariff structures, regardless of the mode of transport. There clearly needs to be a system to modernize and monitor the country’s rail stock.  There should be increased private-sector participation in the development of ports, railroads, airports and roads.  The river system should be better utilized to transport cargoes to ports and remove pressure from both the railway system and the road system.  And critically, there needs to be equal and adequate access to port berths so all companies, Ukrainian and foreign, have a level playing field when exporting goods to global markets.

It’s our view that pressing forward on strategic, incremental changes will help Ukraine attract private investors.  We consistently hear from the private sector that there are a number of specific steps necessary before they will invest money.  More specifically, we hear that it is important that Ukraine finalize a port development strategy.  This could entail a new law on concessions, or outright privatization.  Either way, industry leaders are very clear that the current situation needs to change.  As I mentioned before, increasing transparency and fairness in the rail tariff structure and regulations is also very important.

As one example, one U.S. investment firm would like to introduce fast and efficient “shuttle train” service, but has said it needs to see a change in the tariff structure in order to attract investors to buy increased rolling stock and locomotives.  Improving administrative and technological connections between the rail and port systems is also important, because that can cut the delivery time for cargo in half.  Another suggestion is starting small-scale pilot projects that demonstrate how small improvements in infrastructure can lower shipment costs and improve and increase the export from Ukraine.

One example, another one that people have mentioned, is a pilot river project to increase the transport use of the Dnipro.  Many years ago, the Dnipro handled 60 million tons of cargo during the Soviet era, and I think the numbers now are about 25% of that.  So clearly there is a lot of potential for using river transport.

We know many of these changes are difficult and you will be talking about them through the day.  They will not happen immediately.  But some simple steps can happen now to start addressing the issues.  You are the technical experts who know how to make this happen.  So we would encourage you throughout this conference to talk about how to enable economic growth, greater foreign direct investment, improving Ukraine’s energy security, as well as closer trade ties to Europe and the rest of the world.

In conclusion, I will say that as you try to make these changes, the U.S. will continue to stand with you and be a partner with you every step of the way.  Good luck!