Home Початок | News & Events | Remarks by U.S. Under Secretary of State for Political Affairs David Hale at a Press Conference in Kyiv 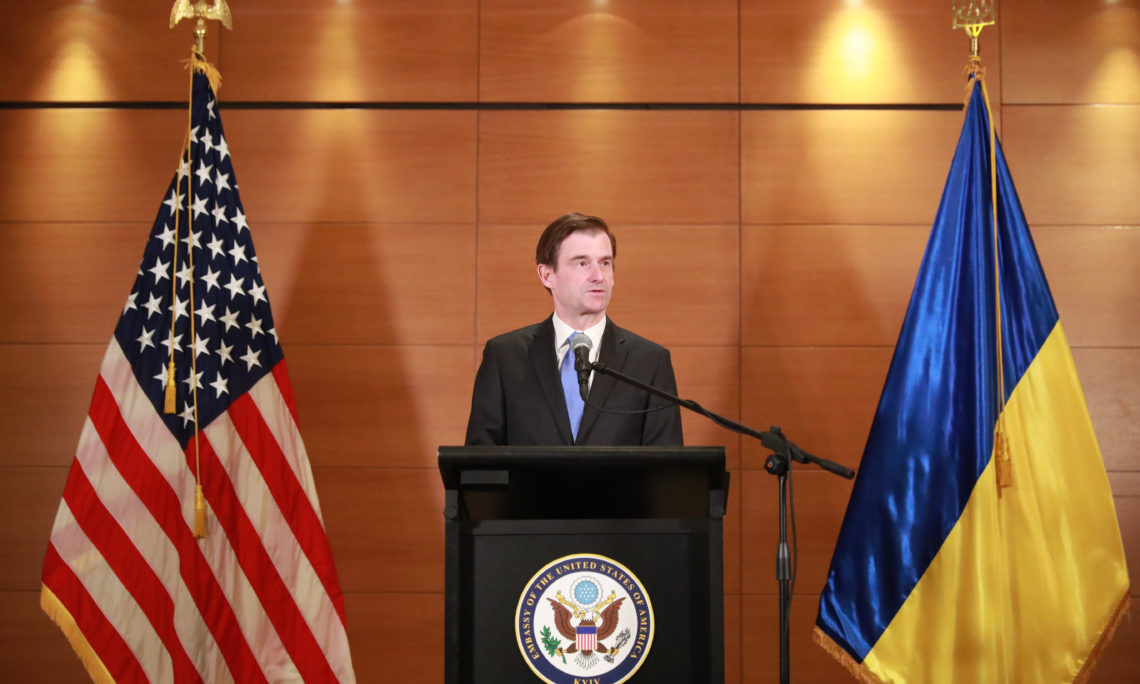 U.S. Under Secretary of State for Political Affairs David Hale

Again, good morning, thank you for joining us. I’m visiting Ukraine today to offer once again reassurance of America’s steadfast support for the Ukrainian people, the Ukrainian institutions, as it faces many challenges today.

On a personal note, I last visited Kyiv 22 years ago, and I have seen tremendous progress in these intervening 22 years.

And in particular I have seen the resilience and the strength of the Ukrainian people, which is a source of enormous admiration and respect for all who are aware of that.

Yesterday, I began my day by visiting the Maidan, which has taken on new meaning since I was here 22 years ago.

And I paid my respects at the memorials of too many fallen Ukrainians, victims to external aggression or to internal conflict.

Many other countries and many other people would not have been able to – would, in fact, have given up in face of the challenges that Ukraine continues to endure.

As for my meetings yesterday, I had the honor to spend time with President Poroshenko, Prime Minister Groysman, Foreign Minister Klimkin, Minister of Defense Poltorak, members of civil society, and as well, today, with leading candidates in the upcoming presidential election.

And I can tell you today as I said to everyone I’ve met, the United States is committed to the success of a stable, prosperous, democratic, and free Ukraine.

In particular, we stand united with Ukraine, and with our European partners, as you defend your country against Russian aggression, in defense of sovereignty and territorial integrity.

And you’re all aware of Secretary Pompeo’s Crimea Declaration, which made clear the unequivocal position of the United States that we do not and will not recognize Russia’s purported annexation of Crimea.

And we also call on Russia to return to Ukraine its vessels and detained crew members and urge Russia to keep the Kerch Strait open and cease its harassment of international shipping in the Sea of Azov and the Black Sea.

But just as Ukraine can count on the external support from the United States and other likeminded countries, it’s important to remember that true strength comes from within.

Ukraine’s real strength comes from the Revolution of Dignity.

Like the United States and other democracies, strength comes from our values and our democratic traditions.

With the Revolution of Dignity, the Ukrainian people made a clear choice in favor of a free, strong, prosperous and democratic Ukraine.

Ukraine is well along the road of reform in the judicial, defense, and economic sectors.

And Ukraine, of course, still has a ways to go.

But we offer our full support and encouragement to continue down that path.

The upcoming elections are key.  America supports the people of Ukraine and their democratic process, not any particular candidate.

But this will be a key test of Ukraine’s democratic progress and development. We expect free and fair elections.

And once those elections are behind you, the United States will continue to work with Ukraine and its people to further our strategic relationship.  Thank you.

Question from Voice of America: You came to Ukraine in the height of the presidential campaign.  Were you interested in answering the question, who is Mr. Zelenskiy? Did you meet with him, and if so, what’s your opinion.  Some say he’s like the Ukrainian Reagan.

Under Secretary Hale:  Well, it was my honor to meet with several of the leading candidates for the presidential election.  Mr. Zelenskiy was among them. I don’t think I really want to share the details of our conversation.  But I said the same things that I just said to you, here in the press, and as I said to all the other officials and candidates that I met about America’s values and our encouragement for the democratic process. And in terms of impressions, it’s up to the Ukrainian people to draw their own conclusions.

Question from Ukrinform:  You met with Prime Minister Groysman.  Have you discussed the energy, oil, and gas sector and in this context, possible non-prolongation of the contract with the head of the Naftogaz company, Mr. Kobolyev?

Under Secretary Hale:  I talked about the energy sector in virtually every meeting, I believe, that I had here, including with the Prime Minister.  And I think for any country in the world, it’s important to remember that energy security is equivalent to national security.  So that was one of the themes of my discussions here in Ukraine.  As well as the importance of having a healthy energy sector, which means – in our view, anyway, that it’s responsive to market forces.  And, of course, for us, the issues related to energy in this part of the world are of great significance to our security and the stability of Europe.  What happens here in Ukraine in connection with its energy sector is directly linked to what happens with the Nord Stream 2 project, which, as you know, the United States opposes.  So that was the tenor of our conversations.  I don’t want to get into more details about the specifics, but we certainly believe this entire enterprise should be governed by, essentially, modern rules of corporate governance.

Public Television: Ambassador Yovanovitch yesterday said that for the sake of integrity of anti-corruption institutions of Ukraine, the special anti-corruption prosecutor should be changed. Is it a demand by the United States, to whom is it addressed, and how does it go with the issue of interfering or not interfering with the affairs of a sovereign nation?

Under Secretary Hale:  Well, Ambassador Yovanovitch represents the President of the United States here in Ukraine, and America stands behind her statements.  And I don’t see any value in my own elaboration on what they may or may not have meant. They meant what she said.  As a visitor here from Washington, I perhaps can widen a little bit the question if you permit me.  What we seek is what the Ukrainian people seek: the aspirations that were so clearly defined and expressed during the Revolution of Dignity.  The Ukrainian people said then, and they say now, I believe, that they want to make a choice. A choice for transparency, accountability, and modern corporate good governance. It’s especially important that the institutions be led by individuals who are committed to those values — especially the institutions that are, in fact, designed to enforce those rules.  But in the end of the day, these are choices for the Ukrainian people through their elected representatives and their institutions.  That’s where we stand.