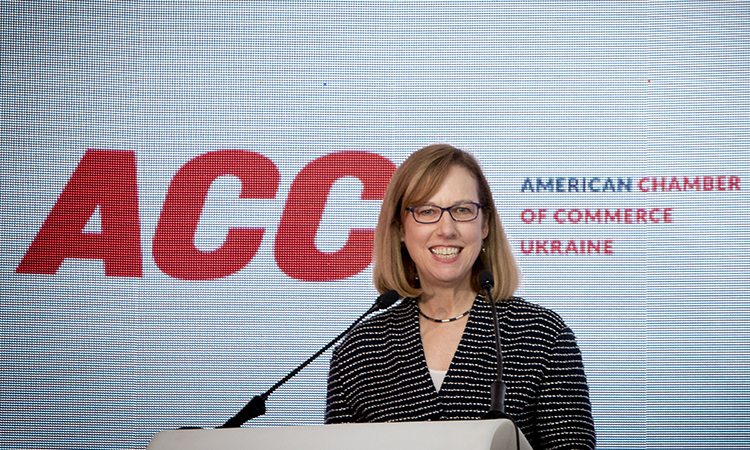 Thank you, Andy.  Thank you, AmCham, especially all the board members, some of whom I just met tonight, it’s been a real pleasure.  I’ve got to say, you know, I feel when I come to an AmCham event, I’m sort of among my people. For my 27 years in diplomacy, most of them were spent doing economic diplomacy, so when I come to AmCham, I feel like I’m coming home [inaudible]. And what I really appreciate now is that we have such a great relationship — with Andy, with the whole AmCham team — we really work together extremely well, and I think we support each other’s work.  So I want to thank you, and the whole team, Andy, for the amazing work that we’ve been doing since I got here seven months ago, and which I’m sure we’ll continue to do for the rest of my time here.

I would say right now that it’s an exciting time to be in Kyiv – to witness the most important reforms being made by the Prime Minister, who will be here soon, and his government team.  AmCham and the U.S. Embassy have the same goal: to promote reforms that create a transparent, dynamic, and fair business environment.

And AmCham’s activities play a critical role in the reform process.  They advise the government on the types of changes that will attract high-quality investment in Ukraine.  And then they facilitate and support that investment when the conditions are favorable. This is only possible when government takes the concerns of the business community seriously.  So we thank the Prime Minister and the Zelenskyy administration, for working with AmCham to adopt reforms that will both increase opportunities for U.S. companies and build a stronger and more prosperous Ukraine.  Together, we can support Ukraine in achieving President Zelenskyy’s goal of turning Ukraine into an investment mecca for Central and Eastern Europe.

Now that OPIC has transitioned into the International Development Finance Corporation, we anticipate even more opportunities to boost our commercial relationship.  In addition, the U.S. Export-Import Bank was recently reauthorized and has resumed cooperation with Ukraine, as well.  These are great signals for investors and boost opportunities for American exporters to take advantage of the growing Ukrainian market.

One way to do that is a program that we have called SelectUSA, which helps Ukrainian companies find promising investments in the United States.  The annual SelectUSA investment summit will be held this year in Washington, D.C., from June 1 to June 3, and we’d love to host a Ukrainian delegation at this high-level event. I don’t believe we have had a Ukrainian delegation there before, and it would be a great show of Ukraine’s strength and dynamism right now in business to have a delegation in Washington.  Last year, SelectUSA had more than 3,000 attendees who were partnered with economic developers from nearly all the U.S. states and territories, who all go to Washington and meet up with interested investors.  So if you’re interested in participating, please find one of my Embassy colleagues during the reception. Raise your hands, Embassy colleagues, so we know where to find you.  Okay, thank you.  Please find somebody and ask them about it, and we can give you all the information.

So, with that, I’ll conclude and say that this is an exciting year for business in Ukraine, and I look forward to working with everyone in this room to create the best possible business and investment environment.  Thank you very much.

Good evening.  Thank you, Andy.  And I’m delighted to be here, and as I said to you, when you talked to Secretary Pompeo, I said ask and you shall receive, so here we are.

Look, when the events on the Maidan took place, I was on the staff of the Senate Foreign Relations Committee covering Ukraine.  And we had been working with regard to Ukraine and what was happening pretty closely. And I have to say that that was when everyone in Washington woke up.  And the reason we woke up was because, not far from here, some Ukrainian patriots gave their lives.  They gave their lives for a vision of a country that they want to live in.  And so I know Ukraine has not forgotten them, and the world cannot forget them.  The United States of America has not forgotten them, and neither have I.

I’m here because the new Chief Executive Officer of the Development Finance Corporation instructed me to come here.  He actually told me to come as soon after Secretary Pompeo was here as possible.  Because he wanted to send a message.  And the message is this:  There are a handful of countries that the DFC is going to focus on and to work to strategically be of assistance.  Ukraine is one of those countries.  And it’s not just the sacrifice of those who I mentioned.  It’s what’s happening here.  Because I think what’s happening here is actually meeting those dreams, and helping them to become a reality.  When I look around this room, I see agents of change.  There is a clear sense that this government and the president, the prime minister, on down to Yulia sitting here, whom I met with earlier, are serious about taking the political risks that are necessary to make the changes that will help this country become a modern economy that is integrated with the world, with Europe, and with our country, as well.

During this visit, I’ve met together with Kristina and with our excellent Embassy team here — by the way, they are extraordinary professionals who not only care deeply about our country but they care about Ukraine, too, and are good partners — but I have been so impressed with the conversations that I’ve had with you, Yulia and with others, about the seriousness, actually asking even some tough questions, which is good, because that’s what friends do.  And so the DFC has just now constituted and has broader authorities and we have – Congress has doubled our ceiling, our portfolio ceiling to $63 billion, and that gives us the room to actually engage strategically.

So we will be coming back; it’s my hope that Adam Boehler himself will be here soon, and what I wanted to do — as I have been witness now here in these conversations to where Ukraine is and where it is going, and the role that all of you have played in that, will play in it — that this is a country that matters and where the United States and the Development Finance Corporation will be present as your friend and as your partner.  Thank you very much.