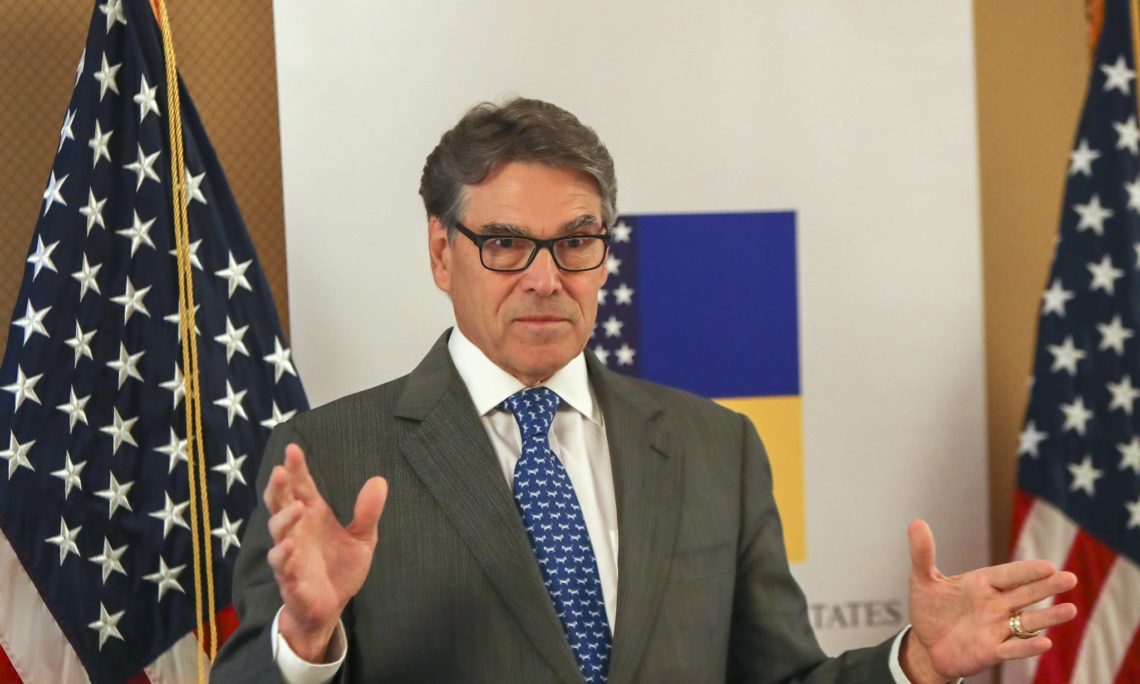 I want to say what a privilege it is for me to get to serve in the Administration and to get to travel to places like Ukraine. We were just in Poland having some of the same discussions.  There’s just this great potential for Central Europe and in turn, the whole of the European continent.  And particularly when it comes to energy and energy security.  Many of you are directly engaged in that, we just finished a meeting with the folks who have the civil nuclear responsibility here in Ukraine and we discussed about the potential and the projects there. I’m really interested in our ability to help strengthen Ukraine’s civil nuclear side of things, particularly the potential with small modular reactors as we go forward.

The impact on our environment is powerful. We think about zero emissions from the development of power from a nuclear aspect, as well as natural gas.  And Ukraine is unique in the sense of where it finds itself in the world at this particular point in time. Not only can they be a major supplier from the standpoint of bringing LNG in through Poland in particular, and then supplying Europe from there. But the potential for exploration and production in Ukraine – this is quite a statement from me, but Ukraine would be the Texas of Europe. The formations that are here — the potential for the development of those is, I think it’s staggering. I remind people that a decade ago, they told us that we had found all the fuel — the fossil fuels — in the world. They called it peak oil, remember?  The guy traveled the country giving a speech about peak oil.  And those resources were always there.  But innovation and technology allowed us to be able to access them.  And today the United States is the number-one oil and gas producing country in the world.  And that’s a stunning turnaround.

You know, Alex Cranberg, who has been in this business a long time can attest to this probably as well as anyone sitting around the table, that we have the potential to change the world.  That’s literally what we’re talking about here.  And the diversity of supply — that’s why we’re very strongly against Nord Stream 2.  Russia’s use of energy as a weapon is unacceptable.  Diversity of that supply is very important.  And I’m not talking about just American LNG.  We’re talking about the Trans-Adriatic pipeline that’s bringing in Caspian Sea gas from the south and coming up to supply Europe. A diversity of forms of energy – nuclear energy, clean-burning coal, our fossil fuels, the LNG – the development of those resources right here in this country.  So, both a pipeline, literally and figuratively, of liquefied natural gas coming through Poland into Ukraine; the development of the formations that are here – and you don’t know everything that you have.  There are very bright and capable geologists that talk about Ukraine potentially having fields as big or bigger than what we see in the United States. When you think about the Permian Basin as the third largest oil field in the world.  Then you start thinking about the potential for over here.  So, the turbines that GE makes — when both Poland and Ukraine transition, not just using that gas to heat homes, but also as a source of driving generators that make electricity – when that transition occurs, the potential growth is stunning.  Again … the potential for Ukraine is stunning.

I just shared with the Prime Minister a little earlier in the morning that the best years for Ukraine are in front of you.  This is a country with an amazing history when you take a peek at where this country has been, the development of the entirety of Europe and Asia, and so much of it comes back and is centered on individuals from Ukraine. You’ve got quite a history.  When I make the statement that the best years are in front of Ukraine, then that potential is extraordinary. So I hope all of you realize that I think we’re sitting on the cusp of some great things for this part of Europe. And in turn, the stability that energy security brings to the region can’t be overstated.  This country has been through a lot.  In the 20thcentury and in the early parts of the 21st century, Ukraine has faced a lot of challenges. And the character and the dignity of the people of this country is what’s carried it through.  Now when you combine that with God’s blessings of these resources, the future of this country can be nothing less than stellar.  And America stands ready to be a partner — both the United States government and our private sector — to help make that vision become a reality.  With that, I’m privileged and honored to be here.