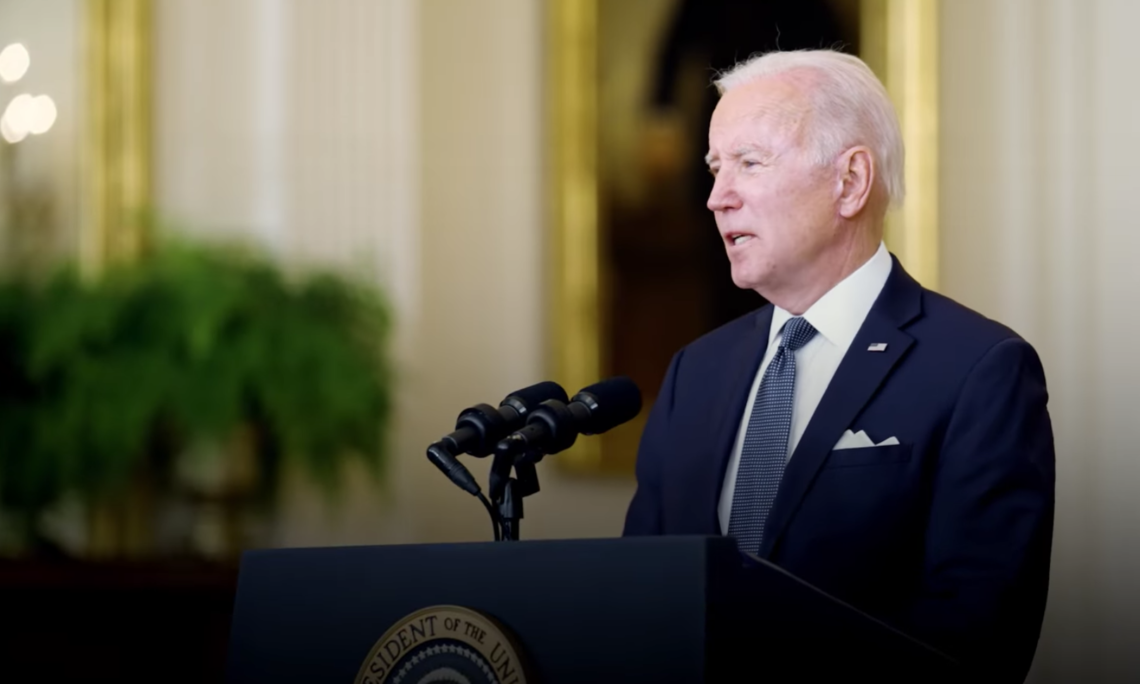 THE PRESIDENT:  Good afternoon.  Today, I’d like to provide an update on the crisis involving Russia and Ukraine.

From the beginning of this crisis, I have been absolutely clear and consistent: The United States is prepared no matter what happens.

We are ready with diplomacy — to be engaged in diplomacy with Russia and our Allies and partners to improve stability and security in Europe as a whole.

And we are ready to respond decisively to a Russian attack on Ukraine, which is still very much a possibility.

Through all of the events of the last few weeks and months, this has been our approach.  And it remains our approach now.

So, today I want to speak to the American people about the situation on the ground, the steps we’ve taken, the actions we’re prepared to take, and what’s at stake for us and the world, and how this may impact on us here at home.

For weeks now, together with our Allies and partners, my administration has engaged in non-stop diplomacy.

This weekend I spoke again with President Putin to make clear that we are ready to keep pursuing high-level diplomacy to reach written understandings among Russia, the United States, and the nations of Europe to address legitimate security concerns if that’s what — his wish.  Their security concerns and ours.

President Putin and I agreed that our teams should continue to engage toward this end along with our European Allies and partners.

Yesterday, the Russian government publicly proposed to continue the diplomacy.  I agree.  We should give the diplomacy every chance to succeed.  I believe there are real ways to address our respective security concerns.

The United States has put on the table concrete ideas to establish a security environment in Europe.

And we’re willing to make practical, results-oriented steps that can advance our common security.  We will not sacrifice basic principles, though.

Nations have a right to sovereignty and territorial integrity.  They have the freedom to set their own course and choose with whom they will associate.

But that still leaves plenty of room for diplomacy and for de-escalation.  That’s the best way forward for all parties, in our view.  And we’ll continue our diplomatic efforts in close consultation with our Allies and our partners.

As long as there is hope of a diplomatic resolution that prevents the use of force and avoids the incredible human suffering that would follow, we will pursue it.

The Russian Defense Ministry reported today that some military units are leaving their positions near Ukraine.

An invasion remains distinctly possible.  That’s why I’ve asked several times that all Americans in Ukraine leave now before it’s too late to leave safely.  It is why we have temporarily relocated our embassy from Kyiv to Lviv in western Ukraine, approaching the Polish border.

And we’ve been transparent with the American people and with the world about Russia’s plans and the seriousness of the situation so that everyone can see for themselves what is happening.  We have shared what we know and what we are doing about it.

Let me be equally clear about what we are not doing:

The United States and NATO are not a threat to Russia.  Ukraine is not threatening Russia.

Neither the U.S. nor NATO have missiles in Ukraine.  We do not — do not have plans to put them there as well.

We’re not targeting the people of Russia.  We do not seek to destabilize Russia.

To the citizens of Russia: You are not our enemy.  And I do not believe you want a bloody, destructive war against Ukraine — a country and a people with whom you share such deep ties of family, history, and culture.

Seventy-seven years ago, our people fought and sacrificed side by side to end the worst war in history.

World War Two was a war of necessity.  But if Russia attacks Ukraine, it would be a war of choice, or a war without cause or reason.

I say these things not to provoke but to speak the truth — because the truth matters; accountability matters.

If Russia does invade in the days or weeks ahead, the human cost for Ukraine will be immense, and the strategic cost for Russia will also be immense.

If Russia attacks Ukraine, it’ll be met with overwhelming international condemnation.  The world will not forget that Russia chose needless death and destruction.

Invading Ukraine will prove to be a self-inflicted wound.

The United States and our Allies and partners will respond decisively.  The West is united and galvanized.

Today, our NATO Allies and the Alliance is as unified and determined as it has ever been.   And the source of our unbreakable strength continues to be the power, resilience, and universal appeal of our shared democratic values.

Because this is about more than just Russia and Ukraine.  It’s about standing for what we believe in, for the future we want for our world, for liberty — for liberty, the right of countless countries to choose their own destiny, and the right of people to determine their own futures, for the principle that a country can’t change its neighbor’s borders by force.  That’s our vision.  And toward that end, I’m confident that vision, that freedom will prevail.

If Russia proceeds, we will rally the world to oppose its aggression.

The United States and our Allies and partners around the world are ready to impose powerful sanctions on [and] export controls, including actions that did not — we did not pursue when Russia invaded Crimea and eastern Ukraine in 2014.  We will put intense pressure on their largest and most significant financial institutions and key industries.

These measures are ready to go as soon and if Russia moves.  We’ll impose long-term consequences that will undermine Russia’s ability to compete economically and strategically.

And when it comes to Nord Stream 2, the pipeline that would bring natural gas from Russia to Germany, if Russia further invades Ukraine, it will not happen.

While I will not send American servicemen to fight Russia in Ukraine, we have supplied the Ukrainian military with equipment to help them defend themselves.  We have provided training and advice and intelligence for the same purpose.

Already, in response to Russia’s build-up of troops, I have sent additional U.S. forces to bolster NATO’s eastern flank.

Several of our Allies have also announced they’ll add forces and capabilities to ensure deterrence and defense along NATO’s eastern flank.

We will also continue to conduct military exercises with our Allies and partners to enhance defensive readiness.

And if Russia invades, we will take further steps to reinforce our presence in NATO, reassure for our Allies, and deter further aggression.

This is a cause that unites Republicans and Democrats.  And I want to thank the leaders and members of Congress of both parties who have forcefully spoken out in defense of our most basic, most bipartisan, most American principles.

I will not pretend this will be painless.  There could be impact on our energy prices, so we are taking active steps to alleviate the pressure on our own energy markets and offset rising prices.

We’re coordinating with major enersy [sic] — energy consumers and producers.  We’re prepared to deploy all the tools and authority at our disposal to provide relief at the gas pump.

And I will work with Congress on additional measures to help protect consumers and address the impact of prices at the pump.

We are not seeking direct confrontation with Russia, though I have been clear that if Russia targets Americans in Ukraine, we will respond forcefully.

And if Russia attacks the United States or our Allies through asymmetric means, like disruptive cyberattacks against our companies or critical infrastructure, we are prepared to respond.

We’re moving in lockstep with our NATO Allies and partners to deepen our collective defense against threats in cyberspace.

Two paths are still open.  For the sake of the historic responsibility Russia and the United States share for global stability, for the sake of our common future — to choose diplomacy.

But let there be no doubt: If Russia commits this breach by invading Ukraine, responsible nations around the world will not hesitate to respond.

If we do not stand for freedom where it is at risk today, we’ll surely pay a steeper price tomorrow.

Thank you.  I’ll keep you informed.