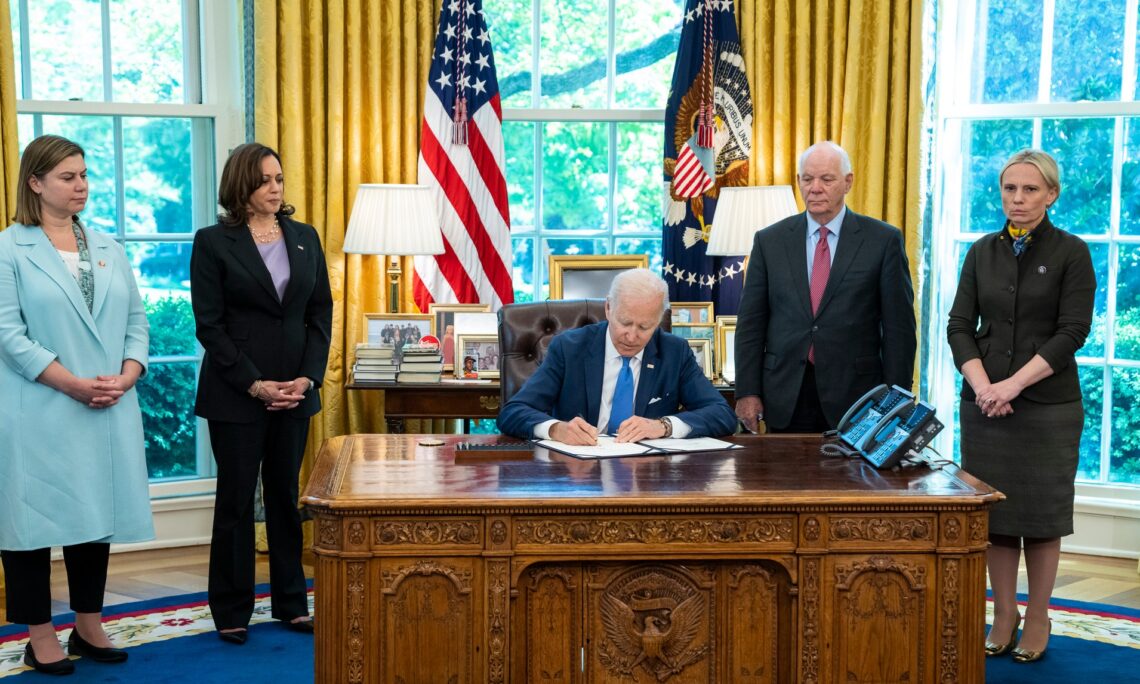 3:08 P.M. EDT THE PRESIDENT:  Well, welcome, folks.  Today I’m joined by Senator Cardin — Ben Cardin; Elissa Slotkin; and the Congresswoman Victoria Spatz — Spartz, excuse me, who — I was just talking to her about still having family back in Ukraine.  God love you.   I — we’re going to — I’m about to sign a bill that these folks are responsible — and, of course, the Vice President, excuse me.  Excuse me.  The — I’m signing a bill that provides another important tool in our efforts to support the government of Ukraine and the Ukrainian people in their fight to defend their country and their democracy against Putin’s brutal war.  And it is brutal.   I want to thank members of Congress here for getting this passed and everyone who supported the bill.  And the bill demonstrates that support for Ukraine is pivotal at this moment. Every day, Ukrainians pay with their lives, and they fight along — and the atrocities that the Russians are engaging in are just beyond the pale.  And the cost of the fight is not cheap, but caving to aggression is even more costly.  That’s why we’re staying in this.  Yesterday, we celebrated VE Day — Victory in Europe Day — marking the end of a transition of the devastation as a consequence of World War Two and Allied nations’ defeat of the scourge of fascism in Europe.   And today, Europe is honoring another important day on the anniversary.  On May 9th, 1950, just years after the end of World War Two, Europe began to work to strengthen the bonds of unity among the nations, particularly the economic unity and the shared economic prosperity.   The idea ultimately grew into the — what is now a 27-nation European Union — an economic powerhouse and a global force for peace and close partners of all — on all the issues we face. And it really has — I’ve said from the very beginning: It’s — it’s something that is good for everyone.  It brings these countries together in ways that — and they cooperate closely economically.  They also cooperate in other ways.  And you’ve seen it in their support for Ukraine.  And with Putin’s war once more bringing wanton destruction into Europe, and to — to reaffirm the enduring commitment to the future grounded in democracy, human rights, and peaceful resolution to disagreements, I’m now going to sign this bill.   And again, I thank my colleagues who are standing behind me.  And — because it really matters.  It matters.  (The bill is signed.) There you go.  Done.  Thank you.  (Applause.) 3:13 P.M. EDT