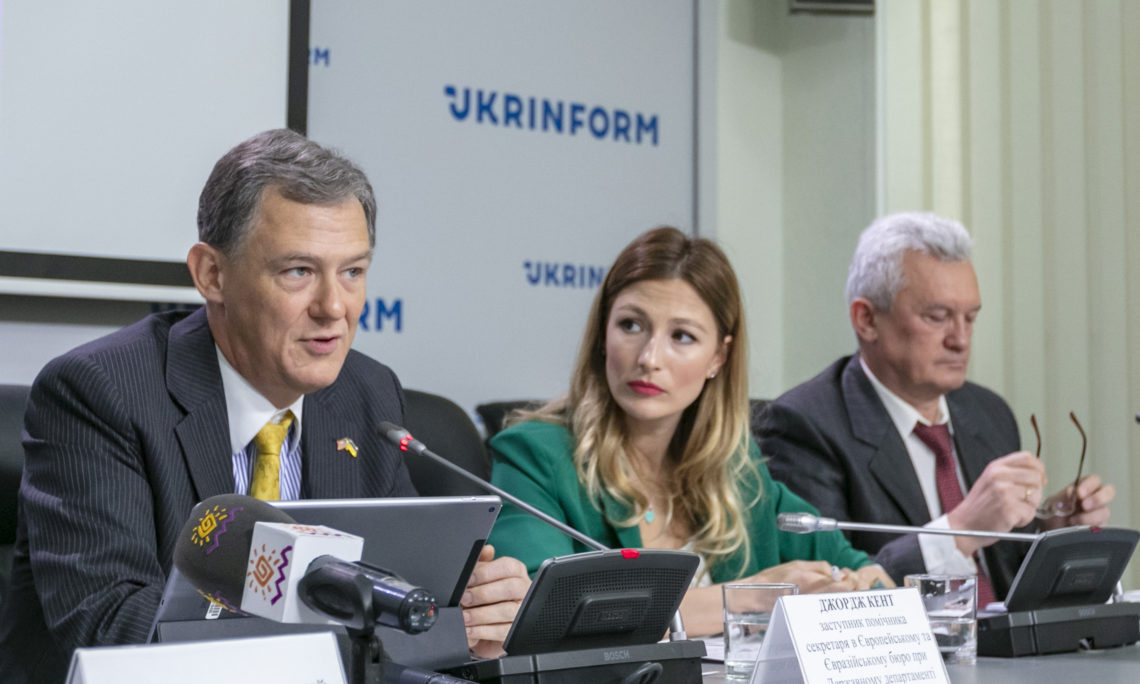 The United States’ support for Ukraine’s sovereignty and territorial integrity remains ironclad and the United States views support to Ukraine, through military assistance, as an important national interest. That support continues.

We know that the reintegration of Donetsk, Luhansk, and Crimea is a significant challenge for Ukraine both now and in the future.

Ukraine has faced Russian aggression for the past five years, as we all know.

Russian aggression against Ukraine takes many forms: occupation of territory in Crimea and the Donbas; a war that has cost 13,000 lives; cyber attacks; explosions; access to energy; and information wars, as I’ve already said.

The United States is proud to support a Ukraine that is able to resist aggression, prosper economically, and build effective institutions serving the needs of the Ukrainian people.  Since 2014, the United States has provided over $3 billion in assistance to Ukraine, including in the spheres of: security; economics and energy; governance and information.

This support includes why we are here today: the largest effort, as Emine [Dzhaparova]  said, to expand Ukraine’s media space in the east and south of Ukraine.

For five years, millions of Ukrainians have lived in areas controlled by Russia and their proxies, but even more have also been cut off from Ukraine’s information space.

It was no surprise that one of Russia’s first targets in the Donbas in 2014 was to blow up the main Ukrainian TV tower on Karachun [Mountain].  Russian misinformation continues to attempt to undermine Ukraine as a successful independent state and to keep it within the Russian sphere of influence.

The challenge is clear. Even Ukrainians living in government controlled territory close to the line of contact and administrative line with Crimea have more access to Russian media, which broadcasts more propaganda than news and information, than Ukrainian TV, which offers a diversity of views on what is occurring in the country.

Last year, Ukraine updated its Information Reintegration Strategy for the Donbas and Crimea to extend Ukrainian broadcasting into regions where it is most needed.

The United States has long supported freedom of media in Ukraine and access to diverse, objective news and information.

We have supported our Ukrainian partners’ latest efforts by providing high quality broadcasting equipment that will provide quality Ukrainian content to over four million residents in the south and east of Ukraine.  This will include as many as two million who currently do not have access to Ukrainian broadcasting.

This equipment will provide access to a diverse range of public and commercial stations, similar to anywhere else in Ukraine.

This investment that we make together in those regions today will help ensure a stronger, united Ukraine in the future.

The United States will continue to stand with Ukraine, support efforts to resist Russian malign influence, and to build a more democratic, prosperous, secure Ukraine.