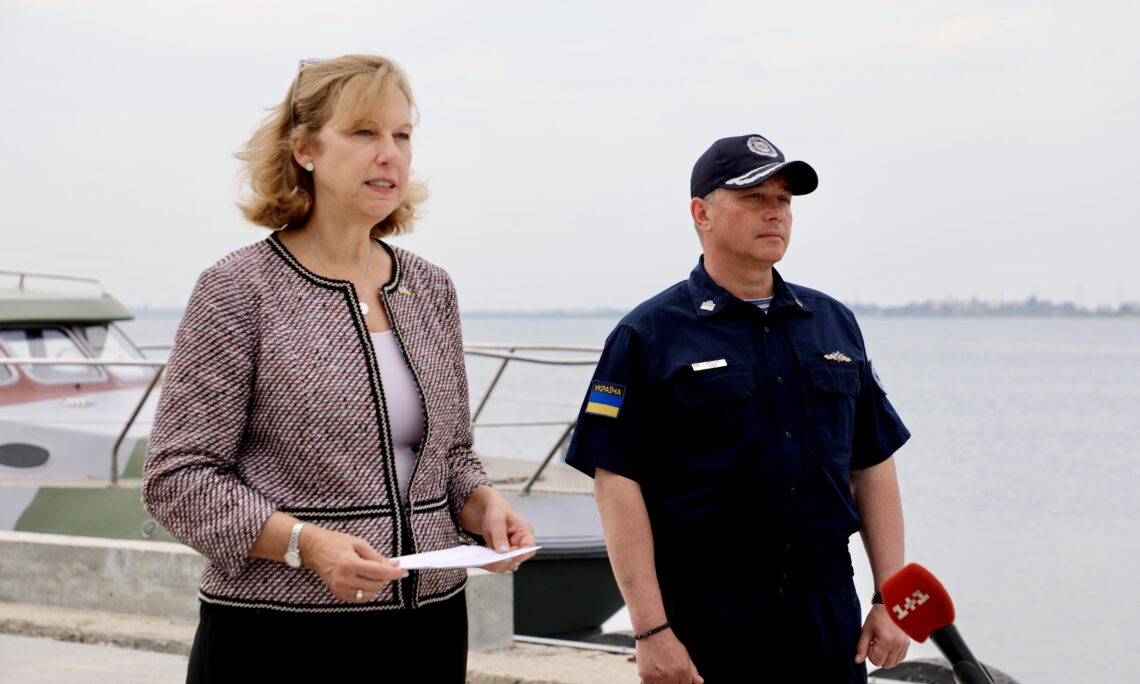 Very good to see all here today. Thank you for coming. First of all, I’d like to thank Admiral Kostur for hosting me today. I’m really excited to be here, first, because it is my first time I’ve been in this location, but also to see the new facilities. I think it’s a very good example of the very close cooperation we have with the Maritime Border Guards. I think it is also important that we are here today to recognize that despite Russia’s claims of a drawdown from Ukraine’s border, the threat to Ukraine continues.

And a lot of the news, I think, especially the international news, the news we saw in the United States, certainly focus on Russia’s buildup on land. But today, first, I just visited Mariupol port shortly a couple of hours ago, and now here, I think it’s also very important to bring attention to what Russia doing in the sea. For instance, Russia recently accompanied its escalation of troops in eastern Ukraine with the declaration of an unusually extensive Military Exercise Exclusion Zone for military and other official ships in much of the Black Sea. And that, combined with other actions that Russia has taken in the Kerch Strait, effectively blocks access to the Sea of Azov for many ships.

So, let’s be completely honest about what this effort is: By restricting maritime activity in Ukrainian waters, Russia is – yet again – trying to chip away at Ukraine’s sovereignty and territorial integrity, in this case at sea. And the United States’ response to this, as it has always been: standing steadfast with Ukraine in our support for its territorial integrity and its sovereignty.

Ukraine’s sovereignty over its territorial seas and access to its ports in the Sea of Azov are critical to its economy and national security. Unhindered access to the Kerch Strait, as well as freedom of navigation throughout the Black Sea, are essential to a free and open maritime commons for Black Sea states, all European nations, and the United States.

And of course, Russia has a history of taking aggressive actions against Ukraine and its vessels and impeding access to Ukraine’s ports in the Sea of Azov.

And I think those of you here today, and certainly we remember Russia’s attack on Mariupol in 2014. And during my time in Mariupol this morning where I met with various folks, I learned that Mariupol celebrated the seventh anniversary of liberation from Russia’s aggression just a few weeks ago and is now seeing an impressive recovery.

And, of course, we all should remember when Russia seized three Ukrainian navy vessels and sailors attempting to exercise the lawful right to transit the Kerch Strait from the Black Sea in 2018.

Russia’s irresponsible behavior at sea, including impediments to shipping and threats to restrict freedom of navigation through the Kerch Strait, has had a profound impact on Ukraine’s international commerce and the livelihoods of Ukrainians working hard to build a brighter and more prosperous future for themselves and their country.

So, now we get to why we are here today.

Russia’s actions prompted the United States, in consultation with the Multinational Joint Commission, to direct security assistance funding to reinforce the Maritime Border Guard Detachment in order to help Ukraine maintain safe and free navigation and protect Ukrainian sovereignty on its territorial waters.

So, we are proud to be here today with our Ukrainian partners as we see another project come to fruition.

This project is just one part of the $4.5 million dollar investment in stations in Berdyansk and Mariupol by the U.S. Embassy’s Export Control and Border Security Program, or EXBS.

Since 2001, EXBS and the State Border Guard Service have worked together to enhance Ukraine’s border security capabilities. In particular, EXBS has focused on developing the Maritime Border Guard’s operational capabilities, providing training, equipment, and modern facilities so they can respond faster and more effectively to crises.

We are also in the early stages of a $12 million dollar project to construct a Maritime Border Guard Rapid Response Unit in Odesa.

And beyond maritime in this area, USAID Economic Resilience Activity is starting a six-year activity that represents a $72 million investment in the development of eastern Ukraine’s economy.

But what we are doing is just a small bit of support for what Admiral Kostur and his team is doing to protect Ukraine, defend its territorial waters, and make sure that the economy and the livelihoods of people in the east can continue.

So, Admiral, thank you for your patience. I had a few things to say, but I pass the word to you.