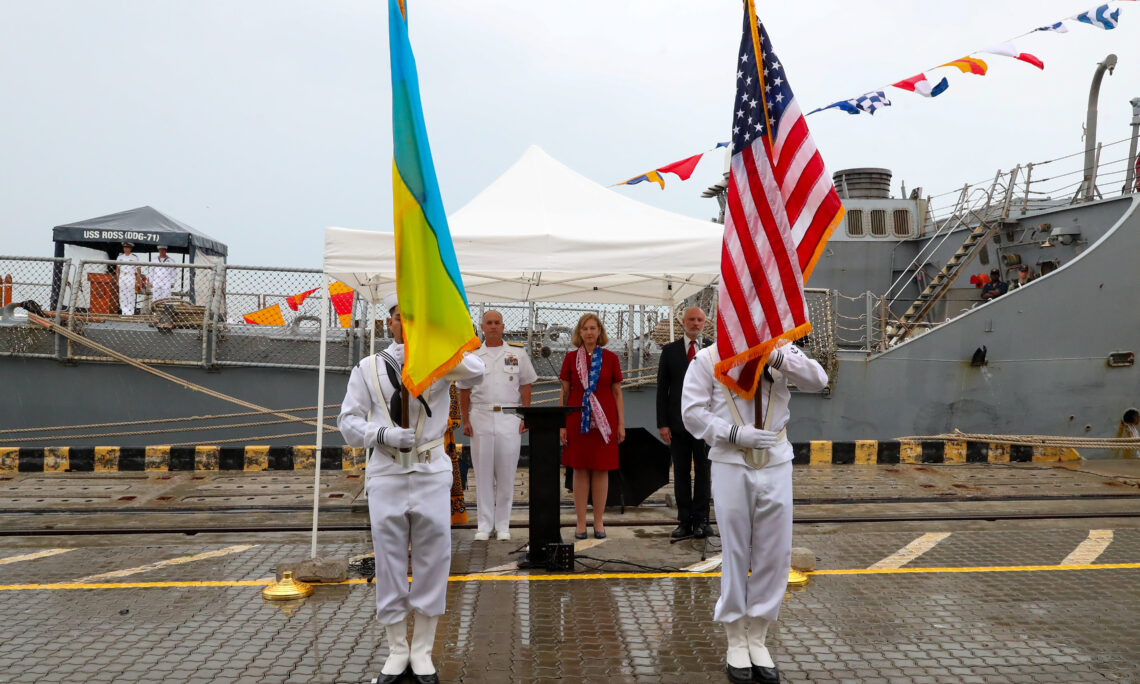 Ladies and Gentlemen – Good evening! Thank you so much for coming tonight to this very special 4th of July Celebration in Odesa. And a special thanks for coming in the rain.  Despite the weather, I hope we can all enjoy ourselves tonight as we celebrate the 245th anniversary of the United States Declaration of independence.

First, let me recognize our special guest tonight – we have Deputy Prime Minister Olha Stefanyshyna. Olha has been working tirelessly to advance Ukraine’s NATO and European Union integration. And I would also like to welcome Commander of the 6th Fleet Vice Admiral Eugene Black, who is here for the Sea Breeze exercise.

In addition to celebrating U.S. independence today, we are also commemorating Ukrainian Navy Day and the 21st year of Sea Breeze. Sea Breeze is an exercise that is a hallmark of Ukraine’s growing security capabilities. This exercise brings together 32 countries with a common purpose — to increase participants’ ability to work cooperatively to defend their sovereign territory — on land and at sea.

And as we take this moment to celebrate, I share the observation that it is particularly symbolic that we are here standing alongside this impressive vessel — the USS Ross. Donald Ross, for whom this ship is named, was a warrant officer on the USS Nevada in December 1941 when it was attacked in Pearl Harbor. He nearly died saving the badly damaged ship. Today, the USS Ross remains a living symbol of the courage and dedication that has helped preserve American independence for 245 years.

Warrant Officer Ross’s dedication and sacrifice over 80 years can be compared to the dedication and sacrifice that Ukrainian soldiers have displayed for the past seven years as they battle Russian-led forces in the Donbas. It is the bravery of these men and women that allows us to stand here today, next to this powerful ship, and play the Ukrainian national anthem along with our own, and to reiterate the United States’ steadfast support for Ukraine’s sovereignty and territorial integrity, including Donbas, Crimea, and Ukraine’s territorial waters.

Thanks to the dedication of Ukraine’s Ministry of Defense, and our cooperative security efforts, Ukraine’s armed forces have become more capable and professional than ever before, serving with distinction alongside U.S., NATO, and partner nations in operations worldwide.  And as NATO leaders reaffirmed at the June 14 NATO Summit — Ukraine will become a member of the Alliance with the Membership Action Plan as an integral part of the process; and no third party has a say in that process.

With the 30-year anniversary of Ukraine’s independence coming in August, it is fitting that this year’s Sea Breeze is the largest in the 21-year history of the exercise. This fact reflects the growing role our partnership plays in promoting peace and security and maritime commerce, not only in the Black Sea region, but across Europe.

In closing, I’d like to take a moment to honor all the Ukrainian, American, Allies, and partner nations that risk their lives every day to defend basic freedoms around the world.

So with that, let me propose a toast to the large and growing partnership of nations, as reflected in Sea Breeze’s success, to Ukrainian-American relations, and to Ukrainian and American independence! God bless America and Slava Ukraini!