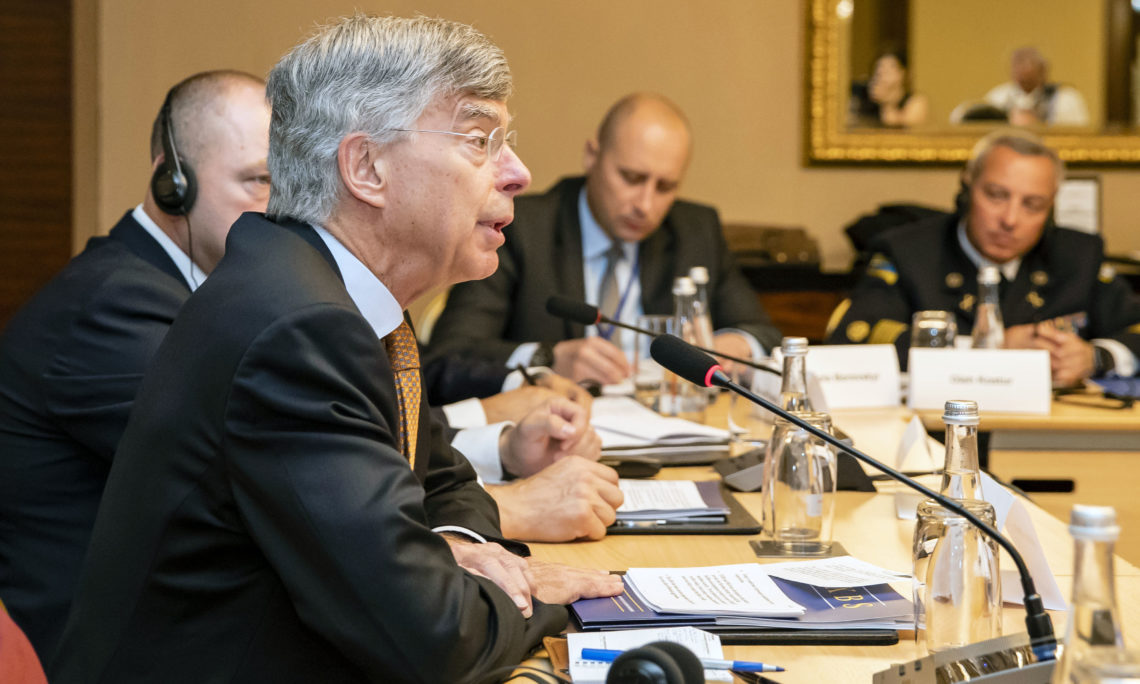 The U.S. Embassy’s Export Control and Border Security Program — we call this EXBS — and the State Border Guard Service of Ukraine have been working together for many years to modernize and improve Ukraine’s border security.

Today’s conference represents a milestone in our cooperation.

EXBS and the Border Guard Service have developed a clear plan to provide the Maritime Border Guard with the facilities and equipment it needs to ensure Ukraine’s maritime security. I’m very pleased to see so many of you here today, from so many countries, because we need your help to make this plan a reality.

This effort has taken on new importance in the last few years due to Russian aggression, as the Chairman just described.

And of course, Russia unjustly detained 24 Ukrainian sailors and their vessels near the Kerch Strait last November.

Such Russian activities illustrate why maritime security in Ukraine is important not only to Ukraine, but to the international community as a whole.

And while the conflict with Russia is front and center, the importance of Ukraine’s maritime security extends far beyond this issue.

Maritime security includes the freedom to navigate your vessel where and when you want, within the bounds of national and international law.

To some, the marine environment and natural resources are the primary focus, which includes protecting against overfishing and pollution.

Many commercial interests — such as ship owners, port operators, manufacturers, railroads, and trucking companies — depend on maritime security to be able to conduct business.

Over 5,600 commercial vessels have called on Ukrainian ports to date just in 2019. These vessels have moved over 61 million tons of cargo.

These vessels carry oil and gas, grain, much of what you see … here in Kyiv and around the country.

Imagine the number of jobs involved both on land and at sea from all of that commerce.

Lack of maritime security hurts trading in legal goods. Without that maritime security, businesses may have concerns about theft, piracy, lack of access to ports and waterways and similar challenges.

Meanwhile, aside from all the legal activity that occurs at sea, it is critical to consider the illegal activity.

For all the same reasons law-abiding citizens use the sea and ships for legal trade, drug smugglers, human traffickers, and terrorists use the maritime environment to serve those illicit purposes.

With the right connections and the right amount of money, a load of cocaine or marijuana can be hidden among the millions of tons of cargo moving in and out of ports around the world every day.

Human traffickers also predominantly turn to the sea to move people from one country to another. Those passengers, unfortunately, often pay with their lives.

To counter illegal activities and create a secure maritime environment, it is critical to have the knowledge, legal regime, authority, people, boats, and equipment in place to identify, stop, inspect, and make a seizure or arrest when necessary.

If drug smuggling is allowed to go unchecked, it could destabilize a segment of a country’s population.

If commercial maritime resources are negatively impacted by a lack of maritime security, the availability of fish, seafood, and other natural resources could diminish.

And of course, the possibility of a terrorist gaining access to materials, equipment, and knowledge related to nuclear, chemical, and biological weapons through lax regulations is a threat to us all.

Ukraine is in a critically important geographic position, as it can serve as a gateway between Europe and the Middle East.

I know many of you here today recognize the importance of Ukraine’s maritime security and are actively working to help improve it.

While we, collectively, have made great strides to improve it, work remains.

The maritime reform plan that you will receive information on today is the product of nearly a year’s worth of work.

Many of you were briefed on some of the project’s goals at a meeting in Odesa last October.

Since then the EXBS team at the Embassy with its partner and implementer, International Criminal Investigative Training Program, ICITAP, in conjunction with the Maritime Region Commander under the State Border Guard Service of Ukraine, have conducted surveys and assessments in several areas and will provide their results.

As a result of the November 2018 Russian aggression near the Kerch Strait, the U.S. Government, in cooperation with the State Border Guard Service, reprioritized and moved the Rapid Response Units in Mariupol and Berdyansk to the top of the list.

EXBS set aside nearly its entire $4 million fiscal year 2018 budget to build the units in Mariupol and Berdyansk, and planning is nearly complete.  We hope, Chairman, to have a groundbreaking ceremony in the next month or so, and see new operational units within six to eight months.

Nevertheless, there is still much to be done. The remaining work will require united efforts from all of us here around this table.

In the future, we also expect Ukraine to pursue a Joint Maritime Operations Center similar to the one that Georgia has implemented.

We have taken several delegations of Ukrainian officers, including Rear Admiral Kostur, Head of the Maritime Border Guard, to visit the facility in Georgia to see how it is organized.  Everyone has been favorably impressed.

There are many benefits to a JMOC, including better routine coordination, faster and more effective response to operational emergencies; better support to the public and to ships calling on Ukrainian ports, through increased coordination among various government entities and cost savings.

We are not quite at this stage yet, but the Maritime Border Guard is striving toward this, and we in the United States strongly support their goal.

For now, we remain focused on assisting with basic infrastructure improvements and helping the Maritime Border Guard establish a 24/7 deterrence and response capability throughout all of Ukraine’s maritime territory.

I hope you will join us in this effort.  Thank you very much for your attention this morning.