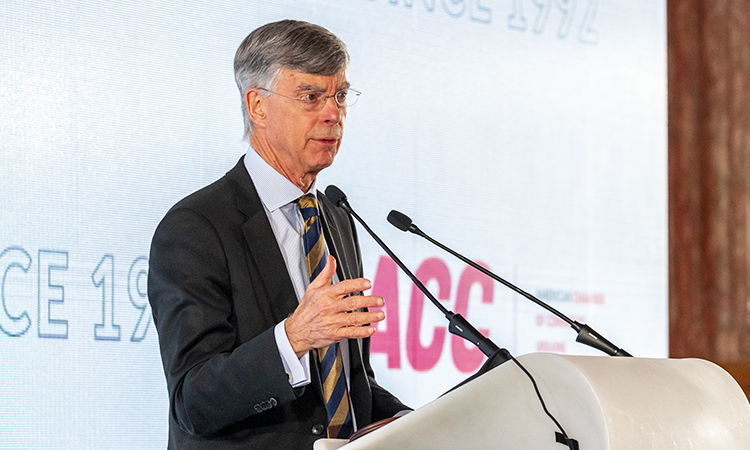 Good evening.  Andy, thank you very much, that was delightful.  I’m honored to be here.  I’m humbled by your introductions, so thank you very much.  I want to reinforce what Andy just said about the embassy team that is here to work with all of you and they are sitting right here.  We have Chas, Ilona, Doug and the whole team is right here so use us, we’d love to talk more with you.

I was talking to some of the government folks yesterday and today, and they were talking about a hundred bills passed by the Rada; more in three months than in any three months in history and they want to go faster!  Now some of the Rada members are punching back a little bit on moving faster.  They’re concerned that if they go too fast that the quality of the legislation is going to go down.  Now the response they say is, “Well, no problem.  If we go too fast passing bills and make some mistakes, we can fix them.  We have the ability to go back and we have the majority to do that.”  So, they’d rather go fast than slow down and that’s ok.

The Prime Minister is also talking about how quickly they’re going to implement some of these laws. I was told yesterday that they normally have a Cabinet meeting with 20 items on the list. But recently, I think earlier this week, they had plenty on the list.  But Cabinet members can put more on and they added another 40.  So they had 60 items in two and a half hours.  That’s a lot of items per minute!  And it’s the same kind of thing; they can’t slow down.  They know they have a limited amount of time.  They know that they’ve got the problem of losing some of their Rada members, of losing some of the members of the Cabinet, so they’re moving very fast on these things.  And I think this is going in the right direction.

We’re all pleased to be here, working with you, with the government and the President’s office.

Challenges, there are some challenges and you mentioned a couple of them.  The biggest one by far is Mr. Putin.  I’m sure we’re all focused, everyone in this room, on Paris on Monday.  The four leaders will get together for the first time in three years in Normandy.  That’s an achievement but that’s not good enough.

There’s always a concern that there’s such pressure to get something.  Everyone wants peace in the Donbas, but there’s the right way to do that, the right messages, the right pieces and the right elements that are important for people in Ukraine.  So the biggest challenge I think is Mr. Putin. He’ll be there and we hope President Zelenskyy will be tough and will succeed in getting a peace that is good for Ukraine.  This will be a challenge for him.

The second big challenge I think are oligarchs.  This is an interesting question for this group. We’re grappling with this thing and we want to make sure there are level playing fields in every one of the sectors you represent here today.  If one or two oligarchs are getting a special deal, or a better deal, or better access that’s not good, that’s not a level playing field.  So we want to be sure that this is one of the areas we work on and we’d love to get your ideas on how to do that.  We’ve got some ideas and we’re doing things.  The government has some ideas and they’re doing some things.  But this is an important piece I think for the business climate and that’s related to some of the things Andy talked about in terms of rule of law.

A level playing field requires playing by rules.  That, in turn, requires cleaning up the courts and cleaning up the prosecutors.  We had a role in helping the Prosecutor General clean up the large number of prosecutors who aren’t qualified.  He has been putting all his prosecutors through tests, one after another.  And a large percentage, 25% for example, of the prosecutors taking the test of “do you know the law?” don’t pass and fail or they just leave.  Several of these prosecutors don’t show up and if they don’t show up, they’re out as well.  So this is an effort to clean up the court system. This is going to be important and I think it will be important to people in this room as well.

The IMF is ready, eager.  I think I mentioned it at another AmCham discussion that the IMF is ready to do this.  But they are concerned, frankly, about oligarchs and they are concerned about a level playing field and the independence of the central bank.  I think it’s going to be important for the IMF to make this decision and make it soon.  Ideally they’d make it before Monday.  It’d be good for President Zelenskyy to go into Paris negotiating with Mr. Putin, hopefully with the heads of state of Germany and France on his side and not on the other side, but also to have the IMF staff level agreement in his pocket.  That would be a good thing.

So I know the point of this meeting here today is to elect new board members and I know the candidates are sitting here and are eager to have me stop talking so they can find out who’s on the next board.  I want to just say again that the U.S. Embassy team here is eager to work with you.  We’re proud to be part of the AmCham family.

Andy, thank you very much for the opportunity and best of luck over this coming year.