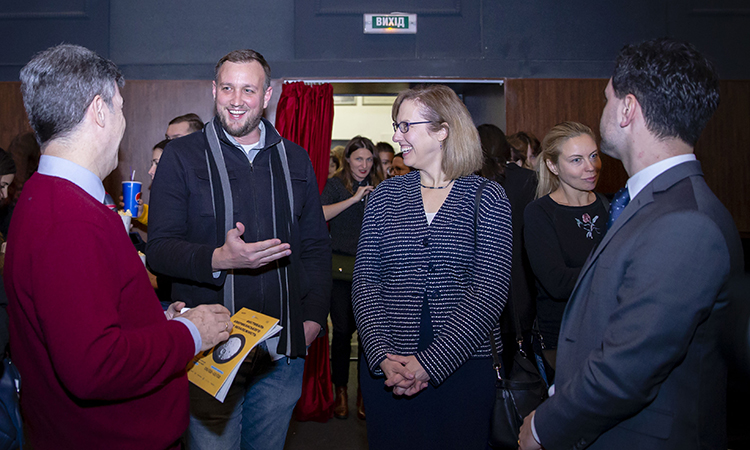 It’s great to be here at the 10th annual American Independence Film Festival.

So when I did some of the press interviews outside this evening people asked me, “Why are you bringing these independent films here?”

And I explained that while our big blockbuster films with a lot of car scenes and, you know, big action scenes are great movies, I think the independent movies are really what shows American culture in its real form.

So I think Anna and her team have really pulled together a very interesting group of films that I think will be fun to watch, but also thought-provoking.

We also have a very special guest tonight.  His name is Tim Skousen and he is going to be presenting his documentary film, which is called Zero Percent, tomorrow.  And he’s also going to be traveling around Ukraine and here in Kyiv to give workshops and talk to young Ukrainian filmmakers.

Could you stand up Tim?  Thank you, Tim.  We look forward to seeing your film tomorrow evening.

And this film covers a period in her life where she was facing some difficulties, some troubles.  And so, while the film is interesting because it’s about Judy Garland, it also shows us that everyone – even movie stars – can face difficulties in life.  And I think it underscores the importance of providing support to people who are facing difficulties.

So I can’t think of a better way to kick off the Film Festival tonight.  So let’s enjoy Judy together.