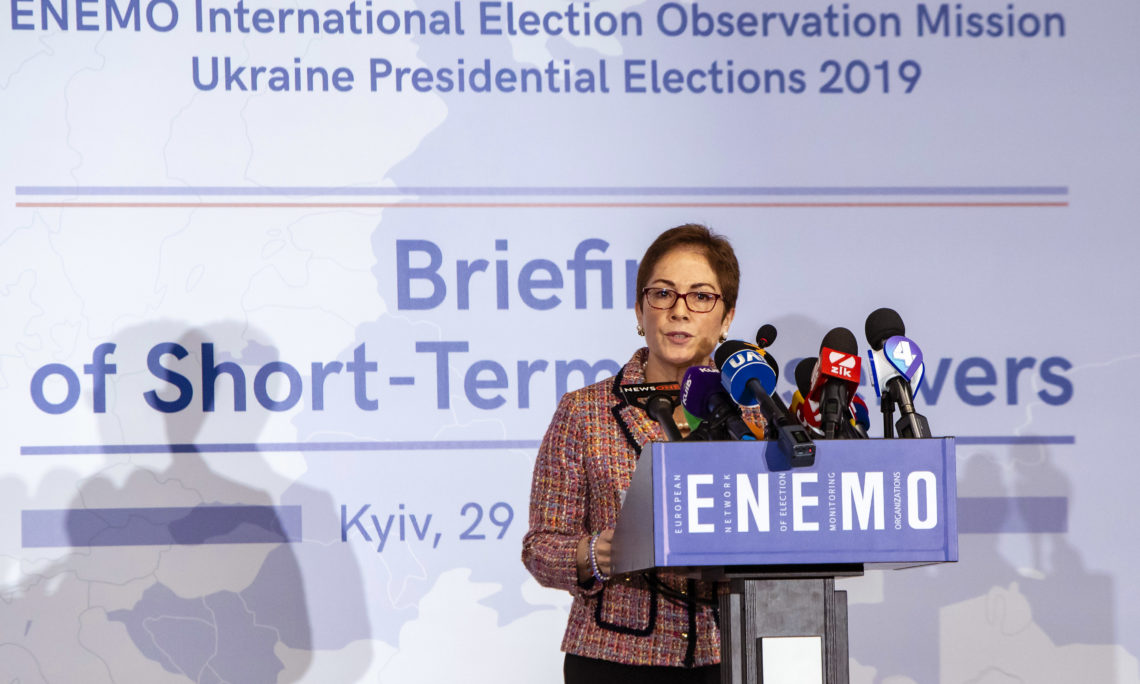 It is such a pleasure to be here and to welcome all of the ENEMO representatives and monitors, whether you’re short-term or long-term.  We know it’s an energetic and diverse group from all over Europe.  And so, I just want to give you a very warm welcome to Kyiv and to Ukraine.

Like many of you, I have been an election observer many times, including here in Ukraine.  And I enjoy it, because it’s an opportunity to get out and talk to people and find out what they’re really thinking.  But I also find that it is inspiring, because for all of us who live in democracies, elections is how we renew and reinvigorate our democracies and it’s exciting to be here when Ukrainians have that opportunity as well.

So, I want to welcome you, but I also want to thank you for taking part in the 2019 Ukrainian presidential elections.

Since 2004, the United States has been a proud partner to ENEMO and we are happy to continue to support the important observation mission to Ukraine at this critical time in a country’s history as Ukraine continues its transformation to a modern and prosperous Euro-Atlantic democracy.

Respect for and adherence to the principles of free and fair elections lies at the heart of any democracy and the fundamental Euro-Atlantic values that Ukrainians embrace.

As all of you know better than most, impartial and independent election observations not only ensure that electoral processes are working — it increases public confidence in legitimacy of the results, thereby strengthening democratic institutions.

Over and over again — whether on the Euromaidan, in public opinion polling or across the kitchen table — Ukrainians have repeatedly and unequivocally asserted that they want to be governed by leaders who represent their interests and to have the opportunity to hold those leaders accountable.

In a few short days, millions of Ukrainians will continue what has become a tradition of free and fair elections here.  Continuing this tradition means that the will of the Ukrainian people will be respected, whoever is elected.

The Central Election Commission, comprised of members from different parties, has a huge role, crucial to demonstrating the success of Ukraine’s democracy, to administer the election, count the votes, and ultimately, determine the winner.

And of course, just as campaign staff will do their absolute best to advocate for their candidates within the bounds of law, the function of civil society observers is to impartially ensure that the elections reflect the will of the Ukrainian people.

And what makes Ukraine different from some of its neighbors is that days before the first round, we still don’t actually know who will advance to the second round.  This is the power of a democracy, when the result is not pre-decided.

And for that power to grow, to act as a check on government, everyone must agree to respect the process and to play by the rules free of undue influence, violence or intimidation.

In short, a country seeking integration with the European Union and NATO should ensure its actions reflect core Euro-Atlantic values.  That is what the Ukrainian people expect and it is what the international community expects as well.

And diverse international group such as ENEMO can help ensure that this happens.

Your independent, credible observation mission will shine a light on a process, which the world will be watching — but most important, the Ukrainian people will be watching.  This is their election, their country.

But they also trust international monitors.  And so, that makes your role really, really important, as well as your responsibility.

So I want to thank all of you for coming from all over Europe to participate in the ENEMO observation mission.