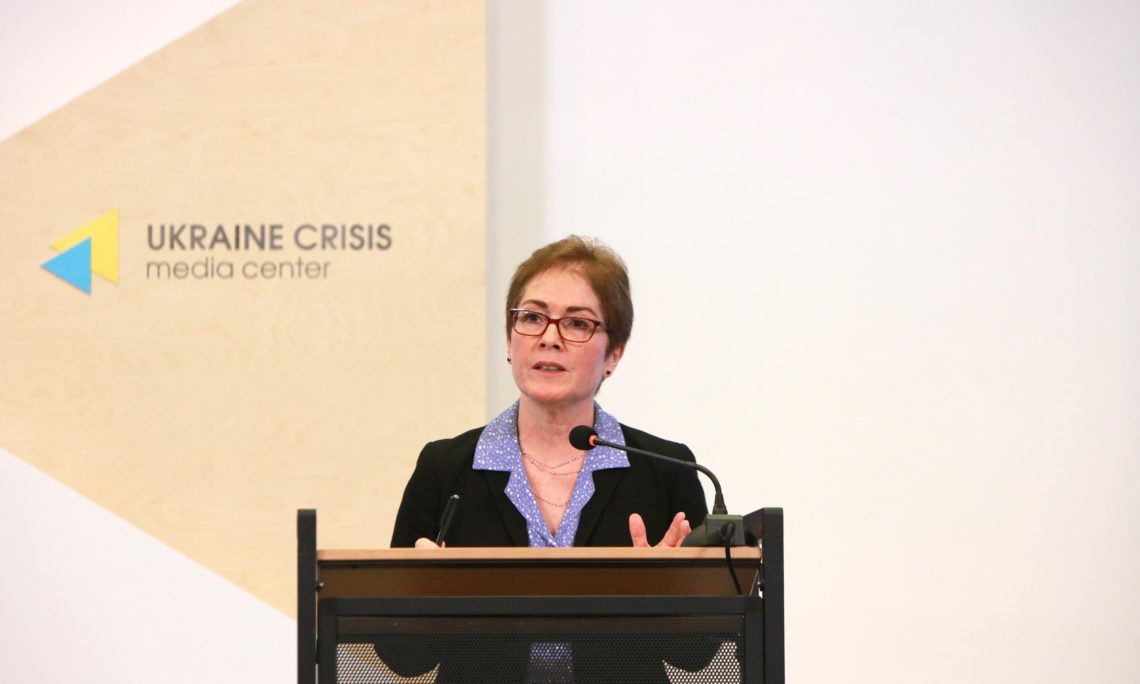 Hi, everybody.  Natalia, thank you, and it’s really an honor and a pleasure to be here to celebrate UCMC’s fifth anniversary.

I think that’s an important milestone, and you noted the many friends — and there are many more American friends of Ukraine — who have spoken here at UCMC, and I’m honored to be in that number also, as a friend of Ukraine during what is a really important period.

Because it’s been an important five years, I think, in the history of Ukraine, and I think we all know, if we didn’t know before, that no democracy can thrive without independent media organizations like UCMC serving the public with integrity and with professionalism.

And we have — the United States has — been proud to partner with UCMC since its beginning.

Today, I think UCMC sets an example for many other media organizations in Ukraine in its objectivity and steadfast commitment to the truth.

That role, and that example, I think, is especially critical today.  Because as we have marked the fifth anniversary – not just of UCMC but also of the Euromaidan – it’s clear that Ukraine is still working – and in some cases struggling – to live up to the aspirations of the Revolution of Dignity.

Let there be no doubt — and I think everyone in the room would come up with their own examples — of the many important areas where Ukraine has progressed over the last five years.  So, I’ll give you my list, but it’s certainly not an exclusive list.

There’s the new anti-corruption institutions, stabilizing the banking system, encouraging the growth of civil society, building a new police force based on western standards, implementing decentralization, and the list goes on.

None of these reforms is complete. It’s always a process, I think in life as well as the history of countries, but progress has been made, and it’s been important progress. And I think it shows what Ukraine is capable of when the government, all of Ukraine’s institutions, and the Ukrainian people work together.

And I think media has an especially important role to play in Ukraine’s progress and also in exposing corruption.

We were just reminded last week, and even last night, when reporters informed the public about the Constitutional Court’s decision to eliminate the illicit enrichment offense from the criminal code. And investigative journalists, last week and last night, revealed allegations of corruption in the defense sector.

The Constitutional Court’s decision is, we believe, a serious setback in the fight against corruption in Ukraine.  It weakens Ukraine’s anti-corruption architecture, including the soon-to-be established High Anti-Corruption Court and the National Anti-Corruption Bureau of Ukraine.

And that news from the Constitutional Court broke in parallel with other concerning developments in the judicial reform process.

We understand that the High Qualifications Commission is poised to approve as many as 31 candidates with questionable integrity to move one step closer to becoming Supreme Court justices.

This could result in a Supreme Court in which 30 percent of the justices have demonstrated flawed professional ethics, which we believe is unsuited to the highest court in the land.

Judicial integrity, I think everybody has recognized, is crucial to transforming Ukraine into a modern, prosperous European democracy.  But instead of building that future, what we’re seeing are some actions by the courts — or the courts being used in a way — to block the reforms and some of the progress that Ukraine has made.

In many cases, courts have reversed successful efforts to clean up the banking system, and most worrying, a new lawsuit was recently filed seeking to reverse the nationalization of PrivatBank and put it back in the hands of those who plundered it.

In the energy sector, where venal interests have long profited, hard-won achievements to fight those interests by establishing a real energy market are now under attack in the courts.

It is increasingly clear that Ukraine’s once-in-a-generation opportunity for change, for which such a high price was paid five years ago on the Maidan, has not yet resulted in the anti-corruption or rule of law reforms that Ukrainians expect or deserve.

But, you know, the fight is not over, even after the tangible progress since the Revolution of Dignity.

As observers of Ukraine during this election year, we’ve noticed that since the Ukrainian people want change in their lives and in their government, everyone styles themselves as a reformer.  So what are some of the things that are being discussed in Ukraine today, initiatives that could move and help institutionalize the transformation that Ukrainians seek.

I think one thing, coming after last week’s decision, would be passing – actually passing, not just proposing – a new and better amendment to the criminal code that not only restores illicit enrichment as an anti-corruption tool but reinstates the dozens of cases that were undermined by the court decision.

Instead of annulling anti-corruption laws, there are some that believe that the Constitutional Court could focus its attention on revoking the law that requires civil society to file electronic asset declarations, which was clearly intended to undermine the effectiveness of those – like media representatives – who expose corruption and hold elected representatives accountable.

To ensure the integrity of anticorruption institutions, the Special Anticorruption Prosecutor must be replaced. Nobody who has been recorded coaching suspects on how to avoid corruption charges can be trusted to prosecute those very same cases.

Those responsible for corruption should be investigated, prosecuted, and if guilty, go to jail.  And in order for that to happen, all of the elements of the anti-corruption architecture must be in place and must be working effectively.

The High Qualifications Commission, we believe, should consider seriously questions about the integrity of judicial candidates.

We don’t understand what the reason would be to appoint demonstrably flawed candidates to the country’s highest court, especially when there are other qualified candidates without such concerns available.

And the Public Integrity Council must be given more power to prevent bad apples from continuing to corrupt the judiciary.

As has been so long discussed in Ukraine – I mean, for decades, really – MPs, who continue to enjoy immunity from prosecution, a situation that everyone recognizes is ripe for abuse, should vote to end that immunity for the next Rada.

The government of Ukraine should also immediately fund a complete audit of Ukroboronprom and declassify the State Defense Order to the maximum extent possible.  This will promote transparency and fight corruption in the defense sector.

Turning a blind eye to corruption in the defense sector is taking food, medical treatment, and weapons out of the hands of Ukraine’s brave soldiers.  And the government should investigate and prosecute cases of corruption at Ukroboronprom and elsewhere.

And during an electoral year with both presidential and parliamentary elections coming up, I can’t think of any greater priority than ensuring that Ukraine’s elections are free and fair. It is important that the will of the Ukrainian people be respected, no matter what the outcome.

What does this mean in practice?  Only the independent Central Election Commission should administer the election and count the votes.

Civil society observers and campaign staff should not be intimidated or harassed.  Official, apolitical security should ensure that titushki or other armed groups do not stop voters from expressing their will.

People who buy votes should be punished. But so should the people who are paying them for their vote.  Campaigns that try to falsify vote records should be prosecuted. And government resources should never be used to target political opponents.

In short, a country seeking integration with the European Union and NATO should ensure its actions meet western standards.

So I’m often asked, why do we encourage these principles?  Because the U.S. stands with the Ukrainian people in expecting free and fair, democratic presidential and parliamentary elections later this year.

And so, why do we support all of that? Because a prosperous, stable Ukraine that is at peace, that is democratic – that makes a great partner for the United States.  So we think that it works for Ukrainians but it also works for us and we will have a stronger partnership as a result of Ukraine’s development.

I think the people in this room know that none of these goals can be fully achieved without a robust, independent media informing the public and policymakers.

That’s why we have been concerned by reports of pressure on independent journalists.  Intimidation and harassment have no place in a modern democracy.

So, those who support a stable, economically strong, democratic and inclusive Ukraine must be the independent media’s strongest supporters.

So in closing, I just want to thank you again, Natalia, and to everyone at UCMC, for the opportunity to be here today – we’ve got our whole team here, I think, from the Public Affairs side, who are proud of our partnership with UCMC. We are grateful to be celebrating five years of great work with all of you, and grateful to be able to express U.S. support for an independent and strong Ukrainian media.