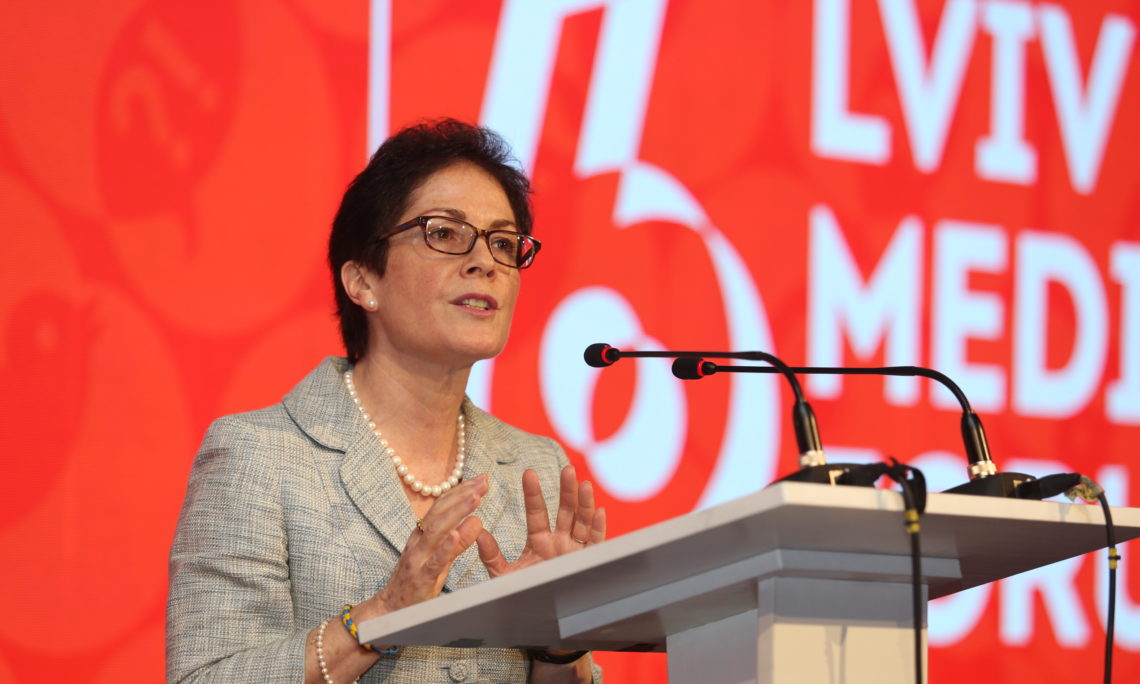 Let me just say upfront, it thrills me to be here.

When I was a student, I dreamed of being a journalist. It was my first ambition.  And I made it all the way to the becoming the editor of my high school newspaper.

I want to tell you why I wanted to become a journalist.  Grew up in the Watergate era.  I saw  the professionalism, , and integrity and really the heroism of the journalists who uncovered the Watergate scandal  And we saw them as freedom fighters defending the truth.,  They brought the crime of a very few and the subsequent cover-up by many to the light of the day where everyday citizens could make their own judgments about what happened.

They did it at great personal risk, taking on powerful forces, even the President of the United States.  They provided a tremendous service to the nation and to the cause of freedom and democracy around the world, because the truth behind Watergate could only emerge where free speech and a free press flourish.

These courageous men and women had a tireless devotion to facts and bringing them to the people.

You here today are the inheritors of the same flame.  There is nobility in upholding standards and norms like integrity, decency, objectivity, and truth. It enables your countrymen to make informed decisions without which no democracy can thrive.

On this personal note, I’d really like to thank Ostap Protsyk for the invitation to provide a perspective, on the importance of a free media in free societies.  It’s a perspective I hope many of us in this room can relate to.

It’s a wonderful sign that there are media representatives from 17 countries who have traveled to this year’s Lviv Media Forum: it sends a strong signal both about the vital role of media in democracies, and about Ukraine’s role as an integral part of Europe.

230 years ago next month, the framers of the United States ratified our Constitution.  It began as a radical experiment in government founded on an unusual degree of individual liberty.

230 years later, our constitution is the longest continuously running constitution on the planet.  To what do we owe this remarkable achievement?

Doubtless, part of its strength derives from the rights entrusted to individuals, enshrined in the Bill of Rights.

Among the freedoms guaranteed are freedom of religion and assembly; freedom from unreasonable search and seizure; the right to due process.  And there is one that rises above the rest. And that is freedom of speech – the bedrock of individual liberty and democracy.

I’d even go a step further.  The guarantee of free speech makes possible the exercise of reason.  And the lack of truly free speech explains why such large areas of the globe lag behind in qualitative and quantitative measures such as longevity, innovation, opportunity, and standards of living.

Most people around the world today wish to benefit from the advances of science and technology that free societies have produced.  Many people wish to participate in political freedom as well.

Of course, this only tells part of the story.  The  bill of rights, and the high quality of life it has afforded us, aren’t enough to explain our Constitution’s staying power.

A sheet of paper won’t implement – or defend – itself.

Free societies need guardians who watch out for us.

That’s where a free press comes in. And not to be melodramatic, but I would suggest that journalists are democracy’s night watchmen.

One of the founders of our country, and one of the advocates of a bill of rights, understood this well.  President Thomas Jefferson knew that government exists to benefit the governed, not the governors.

He also understood that only a check on governing power, from outside the government, could hold the government accountable to its people.

He famously wrote, “The basis of our government being the opinion of the people, the very first object should be to keep that right; and were it left to me to decide whether we should have a government without newspapers, or newspapers without a government, I should not hesitate a moment to prefer the latter.”

Today, we routinely refer to the press as the fourth estate – a pillar of good governance that springs from within society yet resides outside the government.

This is the vital role the free press plays in upholding standards of good governance.

But just as freedom comes with attendant responsibility, so too does the journalistic profession.  As with any profession, there are standards of conduct that separate professionals from amateurs and hacks .

Those standards include integrity, a steadfast commitment to the truth, and rigorous analytical objectivity.  Facts require digging.  Opinion should not be represented as fact.

Attention-grabbing but misleading headlines are no substitute for the hard work of delivering the truth.

High standards include working journalists establishing and abiding by a code of ethics and constantly asking, “whose interests should the press serve?”  The answer should not be the government, a corporate interest, or oligarchic owner.  The press should serve the objective truth.

How does a society break this vicious cycle?

The answer, I think, lies with the people, with each and every citizen, with civil society, with everyone in this room.

When President Jefferson said he’d choose newspapers over government, we do well to remember what he said next: “But I should mean that every man should receive those papers and be capable of reading them.”

So, what does that mean? He obviously didn’t just mean capable of reading a string of words across a piece of paper; he meant the ability to assess underlying meaning, discern hidden motive, and critique argument.

There is no substitute for a moderate skepticism, and healthy dose of self-reliance, to develop media literacy on one’s own.

We each must take responsibility for our own informational development, ask difficult questions, and not be satisfied by cheap entertainment – we know precedents – in scandalous, but unsubstantiated, headlines, or media sources that just confirm what we believe

We all need to work as we take in information,  read the news or listen to the news. We need to ask ourselves: What is the basis of this claim?  What are the sources, and what are their qualifications? What other information would I need to know for this argument to be true? Often, what’s not written is more revealing than what is.

Journalism used to demand two sources to make a claim; over the years, some outlets whittled their standards down to one.  Sometimes when I look at a story in the news, I think that there are many outlets that don’t even have one source.  So, it falls to the individual to make up the difference: to wonder widely in your media consumption, to challenge yourself.

The theme of this year’s forum explains why that is:  “Everything is Media!”  Just about literally: our homes are media, everything is media. The global landscape is experiencing a revolutionary change.

There has been an explosion in the number and type of media outlets.  Such transformations have happened before – with the invention of the printing press, radio, and then television – and they bring both opportunities but they also bring man-many challenges.

Going back to the 1950s, American broadcast journalist Edward R. Murrow captured the dilemma well.  He said, “The speed of communications is wondrous to behold.  It is also true that speed can multiply the distribution of information that we know to be untrue.”

So, he said that about seventy years ago.  That age-old question is more relevant than ever: how can we preserve freedom of speech, protect ourselves from disinformation, and keep our nations safe?

Ukrainians are acutely aware of the tension between freedom of speech and national security.

The Ukrainian public is subjected to orchestrated Russian disinformation campaigns, including waves of stories about Crimea and the Donbas, which have little grounding in fact.

To build resilience and raise media literacy levels, the United States offers financial assistance, training, and partnership in curriculum development with a host of organizations dedicated to pushing back against Russian.

The United States offers assistance to the Ukraine Crisis Media Center to improve strategic messaging, and to Ukrainian organizations, such as “StopFake,” that are leading global efforts to expose disinformation by tracing lies to their origins and educating the public. StopFake is really leading the way in that area.

In partnership with the Ukraine Public Diplomacy Project, the U.S. Embassy supports Ukraine’s efforts to promote Ukrainian policies at home and abroad.

Together with and the Ukrainian Ministry of Education and the British Embassy, we are promoting media literacy education in public schools.

These programs are crucial, and they are helping to make a difference.  I won’t go on about them anymore, except to say that they underscore the steadfast commitment of the United States to Ukraine, and they stress the pivotal importance we place on Ukraine’s sovereignty, territorial integrity, and democracy.

Just as all of you do.

We applaud the journalists in the room that are doing so much to build the new Ukraine.