Home Початок | News & Events | Remarks by Ambassador Yovanovitch at the “National Talk: Raising the Level of Media Literacy in Ukraine” 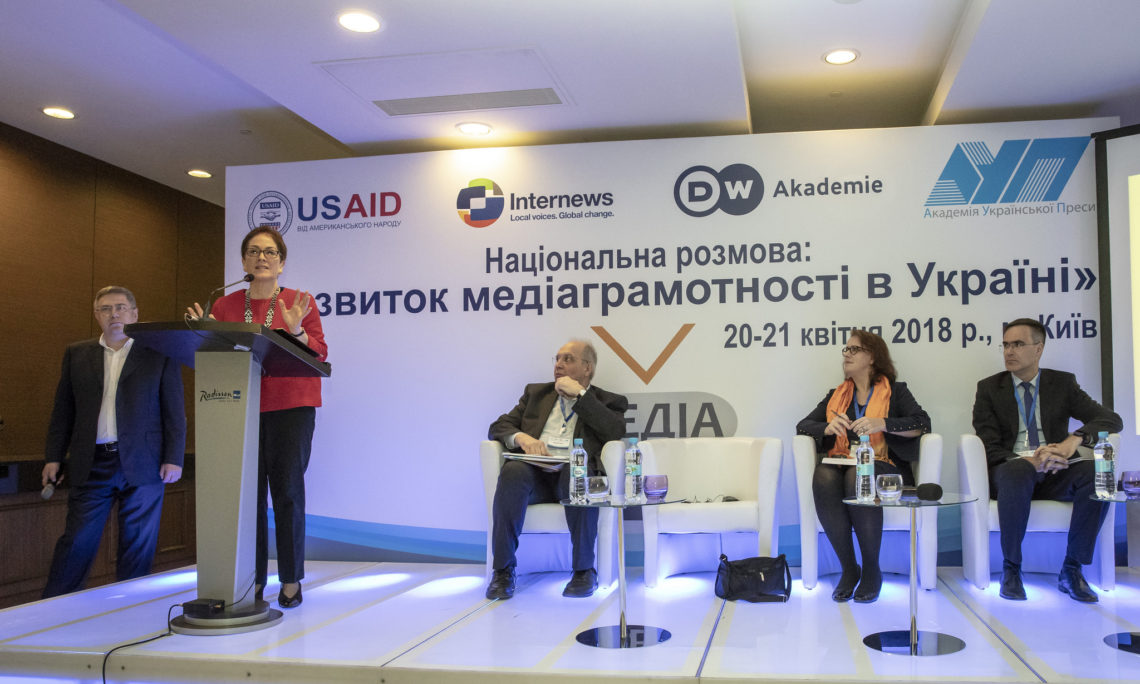 It is just great to be with this group of people at this time because we are so proud to be supporting your work and the work of others to spread media literacy and critical thinking across Ukraine. We think this is really important work and I just want to give all of you a hand.

To show you how committed we are to this effort here in Ukraine, I am pleased to share with you a special video message just for you from one of our most beloved former Presidents of the United States:

[Play Abraham Lincoln Video “Good morning! I’m Abraham Lincoln, the 16th President of the United States. I’m pleased to be with you here today because it is so important that we fight misinformation and propaganda through media literacy and critical thinking skills.”]

So obviously that’s kind of fun, and kind of funny, but it also has a serious point. Now, we all know that Lincoln was President from his inauguration in 1861 to 1865, long before video, social media, or even computers.

But today, technology allows us to do fun things like that video. But – as the video shows – technology can also be manipulated to produce slick propaganda, distort the truth, and spread mis-information like wildfire across the internet. I think we’ve all seen that.

At the same time, the people – especially young people – consume media differently often without really any filters, without awareness of how the messages are produced, who financed it, or who benefits from its dissemination: it could be companies, could be politicians, could be foreign states, could be criminals.

We’ve seen all of that, all over the world, and it’s really something we need to guard against.

When we talk about fake information, we generally think of news stories that just aren’t true. I imagine a dingy warehouse in St. Petersburg, a troll factory, where propagandists and programmers spin a whole bunch of lies hoping to get some traction. And then it’s up to all of us: the people in this room, but also your twelve-year-old daughter or son, also maybe somebody who is in their sixties and vulnerable, or me, who is just super busy and trying to get through everything that’s in my inbox and I’m not paying as much attention as I should, and somehow that information seeps into my brain.

But all of need to develop those skills and critically evaluate everything that is coming to us.

In teaching media literacy you are teaching judgement.

Looking at problems critically, digging for facts, considering alternate opinions, and analyzing issues on the merits and within the broader context: this is not just about getting information, as important as that is. What you are teaching your students, these are fundamental skills for life. And they are also fundamental skills for building communities.

So these critical thinking skills are, well, critical to solving the many challenges facing Ukraine today — from the war in the east, to the occupation of Crimea, to fighting corruption, to European integration, to building a democratic society….these skills and these efforts are essential for building a strong Ukraine.

The work you are doing is about developing a whole generation of people who question, who are thinking about what they’re looking at. And in that active process of thinking and questioning, that’s when people really start to care and start to take ownership of where they are going.

It’s about developing a generation of students – of citizens – who know enough to read a survey or research and ask: “who paid for this?” “I wonder who’s benefiting from that news being out there.” A generation that won’t accept the first glib answer.

That is why I applaud the Ministry of Education, the Association of Ukrainian Press, and all of you for bringing media literacy into the classroom.

There is an American movie called “the Matrix,” who here has seen it? Hands up! So maybe about a third of the people here. That movie is about disinformation too – in this case, about machines which have enslaved humanity through some very high-tech disinformation, creating an alternate reality without the humans even knowing it.

If you’ve seen the movie, you will remember the moment when the lead, Neo, chooses to leave the fake world of lies he is living in: he takes a red pill and embraces the real world, as well as a real struggle, for the truth. And here I think there is a lesson for all of us.

Building media literacy and judgement here in Ukraine — and around the world — isn’t easy. It’s a lot easier to accept what you see and hear, and not ask questions. But developing these skills will build stronger and better individuals, a stronger society, and a stronger Ukraine.

And at the end of the day, whether Ukraine pulls itself away from malign Kremlin influence, whether Ukraine achieves its European destiny is wholly up to the Ukrainian people – not Washington, Moscow, or Brussels. It will be decided here, and you all will play an important role.

Thank you so much, I wish you a very productive conference.