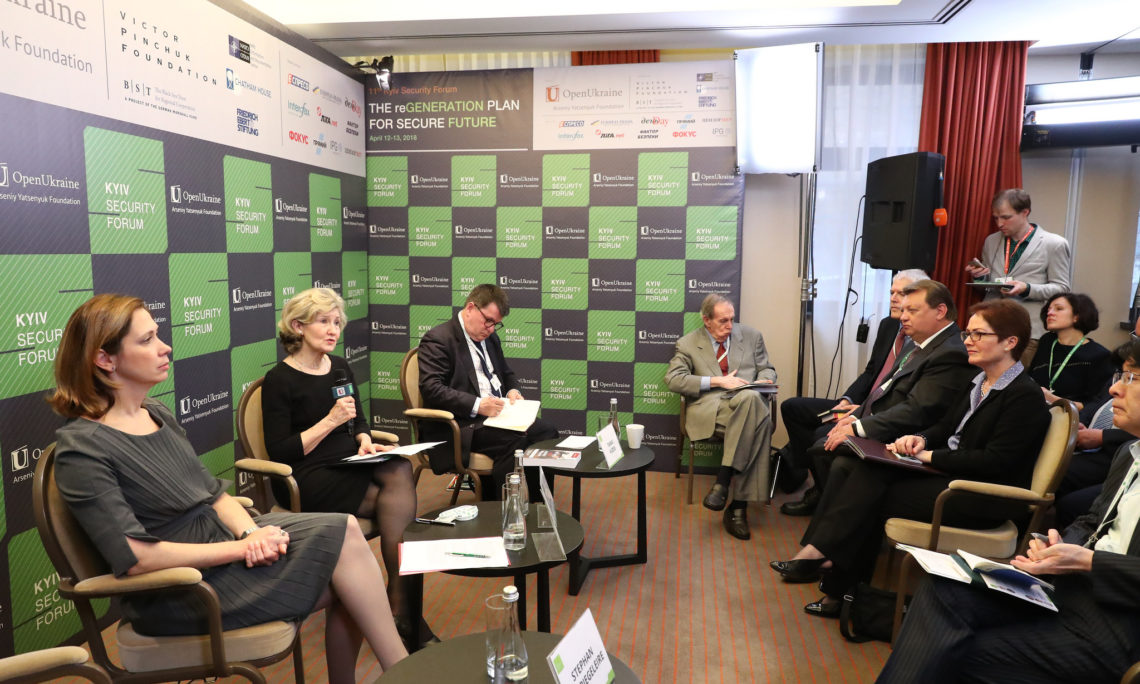 Thank you, thank you everybody.  And thanks for the invitation to appear at this forum. I think these are important topics to discuss here in Kyiv and around the world.

The theme for this summit in Brussels is to demonstrate NATO’s strength, and NATO’s unity, and NATO’s resolve.

I think that’s a really important thing.  This alliance has the same goal, all of the members, and the purpose of the military alliance is to have a strong deterrence.  And I think this alliance is unified, and I think we are prepared to face any threats that the 29 members might face.

And one of the things that I think is sometimes forgotten, but certainly not in the United States, is that there is only one time since NATO’s founding that Article Five was invoked.  And that was after 9-11, and we remember that the allies and partners, including Ukraine, came forward for the defense of the United States when we were attacked.

And so I think that strength, that unity, that resolve, is important and I think it is something that has been maintained over the decades.

The challenges that we faced over time have sometimes been different, and sometimes they are the same, perhaps again.

And so I think that the area that NATO has identified as the major area of deterrence, is the malign activities of Russia.

And I’ll just give you two examples; you know I mentioned hybrid war, and so I think one of the things we are going to see is, perhaps, ways that we can reinforce countries with these new kinds of challenges, and another thing that we’re going to see is what we call the readiness initiative.

Thirty times four, so thirty battalions, thirty air squadrons, thirty ships, and thirty days to get to any of our countries that would need reinforcement for, you know, the more traditional kinds of threats.

But I think that’s what you’re going to see tomorrow in terms of the alliance response to today’s challenges.

And how would we do that?  You had mentioned spending, and the need to invest in our common defense.  And that is something that I think is important to all of the allies, because what we see is that over the past year every single NATO member country has increased its investment in defense spending.

87 billion more dollars in our collective defense; I think that is important.  And what that money is going to is investing in new capabilities to make all of us stronger.

So I will stop there, but I think what you’re going to see is a demonstration of resolve, and unity, and strength.