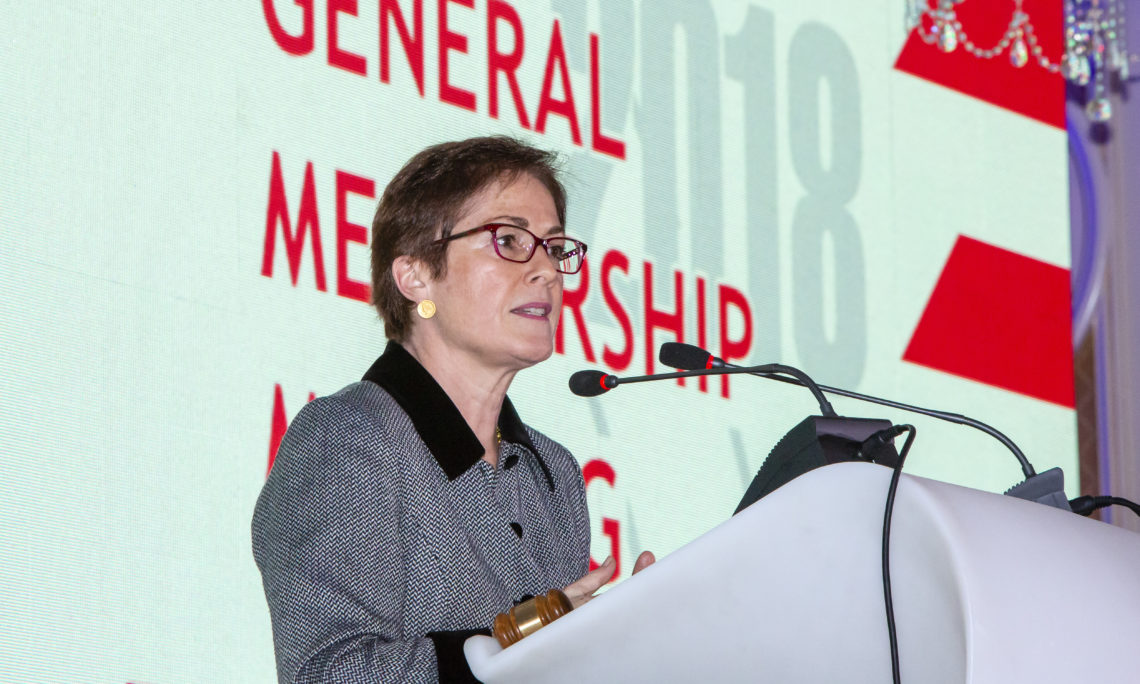 Hello everybody! It’s really a pleasure to be here with you this evening.

And I want to thank Andy and the great team at AmCham for the wonderful relationship that we enjoy not only with AmCham, but that we enjoy with all of you as well.

And I have to say, I am also grateful for the opportunity to be here with all of you, so soon after November 25th, when Russia attacked Ukrainian vessels in international waters in the Black Sea.

And I want to be clear, the U.S. condemns this Russian aggression.

Our thoughts, and I know your thoughts, are of course with the Ukrainian crewmembers still being held by Russia.  We continue and will continue to call for their safe and immediate return.  That is and has to be the highest priority.

We also call on Russia to return to Ukraine its vessels, and to respect Ukraine’s sovereignty and territorial integrity within its internationally recognized borders, extending to its territorial waters.

Both parties, of course, must exercise restraint and abide by their international obligations and commitments.  Ukraine has been doing so. Russia must as well.

I don’t need to tell the people in this room, the business community, how important protecting freedom of navigation against Russian threats is paramount to protecting Ukraine’s economy and its people, as well as security and stability in the Black Sea region.

Russia’s attacks and its efforts to restrict shipping to Azov Sea ports represent Russia’s latest tactic to achieve a goal of a weak and unstable Ukraine with a crippled economy.

Against these acts of aggression, the United States supports Ukraine.  The U.S. stands with the Ukrainian people.  And as Secretary Pompeo said just a couple of weeks ago — although it seems like a lot longer ago — on November 16th at the U.S.-Ukraine Strategic Partnership Commission meeting, “That same spirit of courage and determination drives Ukrainians to continue to fight to uphold their national sovereignty and territorial integrity in the face of Russian aggression.  Ukraine has no greater friend than the United States in this regard.”

And our support is not just verbal.

I think most of the people in this room know that there was recently the transfer of two Island-class cutters to the Ukrainian Navy.

We are undertaking a multi-phase project to provide radar systems and share sensor data with U.S. Navy sites to improve Ukraine’s ability to monitor the maritime domain. This was in train before November 25th, but just obviously November 25th points to the utility of that.

We have been undertaking construction projects at several Ukrainian naval sites, including Ochakiv.

I think many of you are familiar with the annual Sea Breeze Naval Exercise, now in its eighteenth year.  And we have a forward naval presence in the Black Sea coordinated with NATO that exceeds 200 days annually in the Black Sea.

And of course, we’ve also helped develop the naval strategy that was unveiled fortuitously last week.

I think all of these steps demonstrate the seriousness of our commitment to Ukraine and in this case, the Ukrainian Navy.

We are also considering additional ways the United States could help develop Ukraine’s maritime capacity and how we can demonstrate our support for Ukraine.

So for example today, as those of you who have been very, very closely monitoring the news know, the U.S. and allies conducted an extraordinary flight under the Open Skies Treaty.  And so for those of you who are not arms control and treaty aficionados, the Open Skies treaty allows unarmed observation flights over the territory of the signatories of that treaty.

The timing of this flight is intended to reaffirm U.S. commitment to Ukraine.

So, I just want to be clear that the U.S. views Russia’s actions as gross violations of international norms and justice.

And how Ukraine implements this decree will be important – it will be closely watched by international partners, by Ukrainian citizens, and of course by all of you, the business community, as Andy was saying earlier.

And at such times, I really think that Andy and the Chamber demonstrate what a valuable service they provide their members by staying on top of what’s been happening and keeping a close eye on not only what’s happening on the ground and sea, but also with regard to the martial law decision.

Moscow would like nothing better than to discourage international businesses from investing or expanding in Ukraine. I mean, we’ve seen a whole narrative around failing Ukraine, et cetera.

And I think the best way to ensure that Moscow fails in that goal is for Ukraine to live up to what can only be described as tremendous economic potential.

But that can only happen if Ukraine stays the course of reform that it has been on since 2014.

The international community, financial donors, and all of you in the business community have been important in promoting the economic ideals we all share:  transparency, competition, and the rule of law.

But as important as those contributions are, clearly it’s the people of Ukraine and the government of Ukraine that are most important in these efforts.

And I know that sometimes it feels like perhaps Ukraine isn’t moving fast enough, I think, but during 2018 — Andy reminded us of some of the accomplishments — but in 2018 the Rada passed and the President signed into law a number of important measures bringing strong corporate governance to state-owned banks, liberalizing foreign currency and capital controls, reducing business harassment by law enforcement further, and adopting a 2019 budget that the IMF agrees will safeguard Ukraine’s fiscal stability — obviously critical going forward.

In addition, I think we saw solid progress in implementing reforms started in prior years, especially in healthcare and decentralization.

And as a result, Ukraine once again improved its Doing Business Rating by five places, so it’s 71 out of 180.

However, I think we all know that to achieve the kind of economic growth that Ukraine needs, it needs to be very aggressive in implementing reforms and the laws that have been passed.

Above all, we believe it needs to set up an effective anti-corruption court and end the legal impunity of the vested interests.

It needs to carry out the long-promised program of privatizations, open up the upstream energy sector to real investment, and I just heard while we were all mixing and mingling earlier that actually some auctions have been just announced today for March.

And Ukraine needs to press forward on decentralization, public-private partnerships, and other reforms.

Only in this way can Ukraine unleash its potential and kill Moscow’s dream of keeping Ukraine weak.

2019 will bring its own challenges, not the least of which will be presidential and parliamentary elections.  And I think we all believe that credible and transparent elections are one of the hallmarks of a democracy.

These elections represent a critical opportunity for Ukrainians to be heard and to chart the course for their country.

And as I’ve told this group many times before, I think, but I say it because I believe it: I am bullish about Ukraine’s future.  And we at the Embassy look forward to working with all of you to help you grow your business in this country that is so full of opportunity.

So, Andy mentioned elections, I just talked about national elections, but obviously the AmCham elections are pretty critical as well. Maybe not quite as critical, but critical to this group.

I did want to take a moment to thank the outgoing Board for its great work, and in particular Grzegorz Chmielarski for his leadership this past year as Chairman.

I look forward – the Embassy team looks forward – to meeting and working with the 2019 AmCham Board members.

I think the new Board is taking charge at an important point in Ukraine’s history.  I mean, it really feels like there is an inflection point to me.

And I know that this Board is going to be a great partner, not just for us at the U.S. Embassy, but far more importantly, for Ukraine and for your Ukrainian partners.

So with that I want to say thank you and I wish you a happy holiday season as we move into sort of later December and of course January.