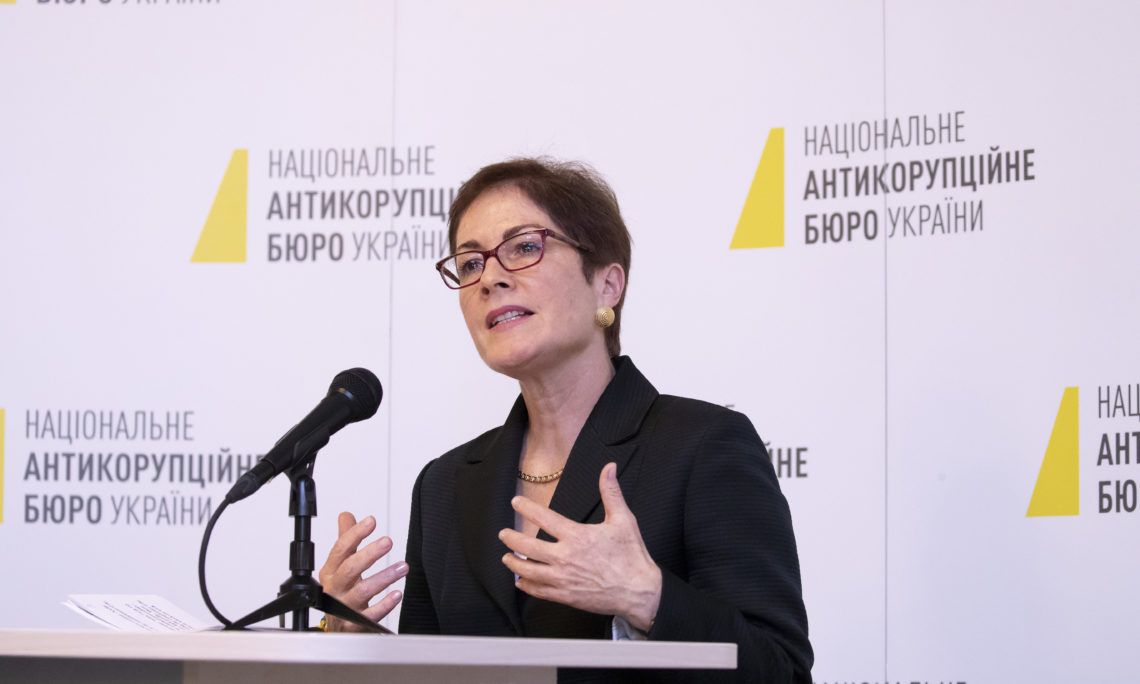 So, I am so thrilled to be here with you on the third anniversary of the establishment of NABU.

I’m not sure whether a cake is coming out next!

What I really want to say, the reason that I came over today, that our whole team came over today is, we want to thank all of you, every single person in this room and the many people who are not here, for doing the important work of NABU. We want to thank you for your dedication and your professionalism.

But, I think it’s important on this third anniversary of the founding of NABU to remember why NABU is so necessary, why your task is so critical to the future of Ukraine.

After the Revolution of Dignity, Ukrainian leaders from many different political parties realized that the fight against corruption in Ukraine would require a comprehensive system, in which corrupt officials could be investigated, prosecuted, and brought to justice.

Three years ago, two institutions were created – NABU and SAP – and Ukraine is close to the establishment of the High Anti-Corruption Court.
In just a couple of years, you’ve had some big “wins,” with 155 pre-trial investigations ready for criminal proceedings – and some of these cases being quite high profile. And I think these successes are especially significant considering the complexities of the cases and the very difficult operating environment that NABU finds itself in.

And I do not need to tell any of you that there have also been some disappointments in the fight against corruption. However, these challenges make the work that you do here even more important.

Your cases are always under intense scrutiny and your actions are always going to be tracked by the media and by others. And I have to say, in a democracy, that’s an important thing. It is important that NABU also do its work up to the highest standards.

That’s what the Ukrainian public expects and that’s what you can provide.

In the U.S., we call that flying the plane while you’re still building it. It’s not easy.

But I know you can do it, and you are doing it.

Your mandate from the Ukrainian people was to bring to justice high-ranking officials who are corrupt.

This was never going to be easy. And I think that it’s probably going to get harder, before it gets easier.

But I cannot encourage you strongly enough to stick with it.

Because the Ukrainian people are counting on you. And it’s important to remember that you are not alone.

We believe that the success of your mission is critical to building the new Ukraine.

And I just want to close by thanking you again for having the Embassy team over today and to say on behalf of all of us, you inspire us with your commitment, your courage, and your hard work.

So I want to thank you.

I think actually the applause goes to all of you, guys. Especially on your birthday!