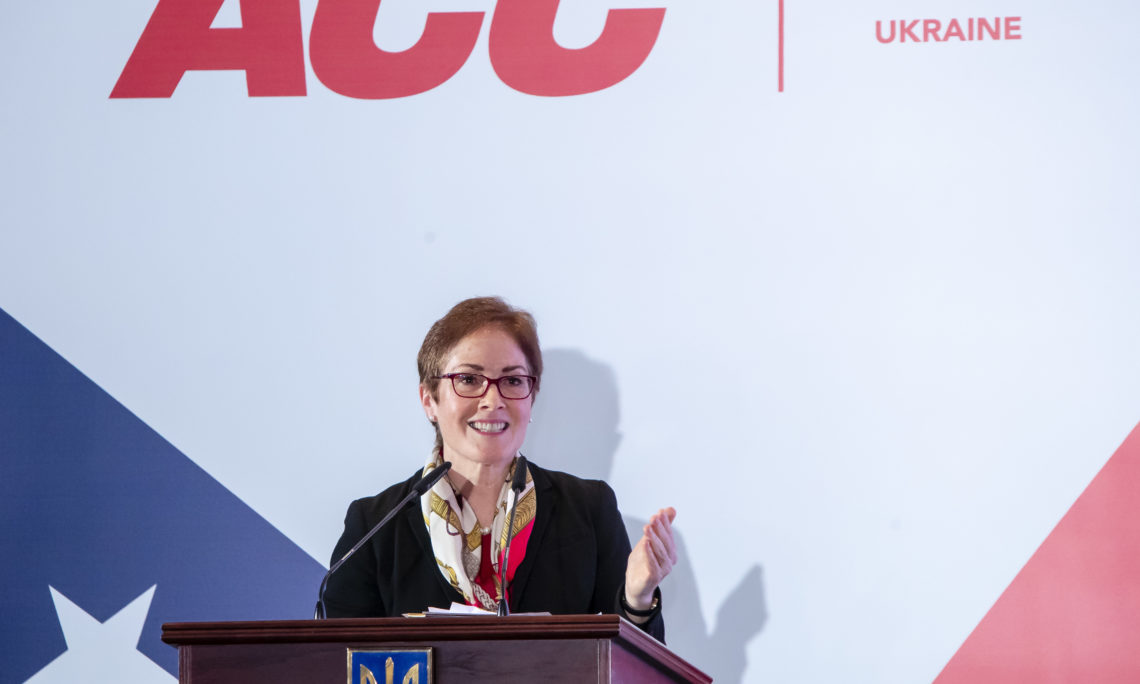 Well, it is absolutely thrilling to be here with President Poroshenko, Prime Minister Groysman, Andy, and Lena.  And it’s a real pleasure to be here with everybody who is here tonight, especially at the Annual Membership Appreciation Reception.  Because it gives me a chance – on behalf of the U.S. government and the Embassy team – to say thank you for everything that you do.

The AmCham Board, members, and partners here in this room play a really important role – and I think you’ve heard that from the previous speaker – in Ukraine’s economy and in supporting crucial reforms that Ukraine is undertaking.

And we greatly value AmCham’s leadership, expertise, and determination.

I know that every one of us in this room shares a common goal, every one of us:  that Ukraine fully realizes its potential to be a prosperous country that provides opportunities for all of its citizens by building successful international business partnerships.

The changes that the Ukrainian people have fought hard to achieve over the past five years have been important steps along the way to a free and transparent market economy.

And while there is still work to do, I am a huge optimist about Ukraine and the vast potential that is here in Ukraine.

And last week in conversations with the board, I heard about record growth and record profits.  And looking forward, I think we are expecting to see more of the same and that is very good news.  It’s good news for all of you, it’s good news for Ukraine.

This year will not be without significant challenges, as we’ve heard.

But whatever the challenges, in this period I think leadership of the business community is more important than ever.  Because it is about the future, about the next generation.

You provide continuity and practical advice.  You are the experts in what is necessary in order to create jobs, grow the economy, and improve livelihoods, under any circumstance.

You press for fairness, for transparency, for rule of law, and – at the risk of speaking for the President and the Prime Minister – Ukraine’s political leadership takes your views seriously.

These principles and the reform agenda you advocate for not only benefit your businesses but also improve Ukraine’s economy.  In other words, they create jobs, raise salaries, pay taxes, and generally make life better for the people of Ukraine.

The upcoming elections offer an opportunity for Ukrainians to reaffirm their commitment to the path of reform that brings peace and prosperity.

Ukraine has made tremendous progress on that path, as we’ve heard, and thanks to the clear expression of the people’s will on the Maidan, the courage of policymakers, and the support of Ukraine’s friends.

And I think everybody in this room is a friend of Ukraine, whether you are Ukrainian or come from someplace else.

Reform – real reform, worthwhile reform – is difficult.  It requires vigilance and sacrifice, and it is almost always unpopular among those who have benefited under the old system.

So it is not a surprise that despite the many reforms that Ukraine has achieved since 2014, corruption remains a powerful obstacle to realizing the dream of turning Ukraine into a completely modern European economy.

That is why Ukraine’s achievement in passing legislation to establish the High Anti-Corruption Court, and the ongoing selection process of justices to that court, is so important.

[I] completely agree with President Poroshenko that judicial reform is one of the most important sectors in reform and it is one that the U.S. Embassy strongly supports.

Five years ago, when the people of Ukraine stood up and declared they were ready for change, some of them laid down their lives in that cause.

And even amid the tumult of a political season here in Ukraine, all of us, I think, should continue to honor that sacrifice and their vision of the future.  And that vision included a prosperous Ukrainian economy.

That’s where all of you come in.

American companies are interested in doing business in a country that abides by the rule of law, one that creates an environment in which businesses can flourish, and in which transparency is the rule.

In closing, I’d just like to reiterate that I appreciate everything that AmCham and its members do every day, whether it’s advocating for fair treatment, working with the leadership of Ukraine, helping Ukrainians, whether it’s in the Rada or elsewhere, analyze the impact of potential new laws.

The list goes on and on in terms of your very substantive, I think, contributions to Ukraine and the framework that Ukraine is establishing now to create that economy of the future.

So I encourage everybody here to approach 2019 as you approached 2018:  with optimism and continued focus on advocacy for an economy in which both businesses and the Ukrainian people prosper.

I know that I am very optimistic, based on my conversations with all of you, that 2019 will be an outstanding year.

So thank you very much and I look forward to staying in touch with all of you over the coming year.