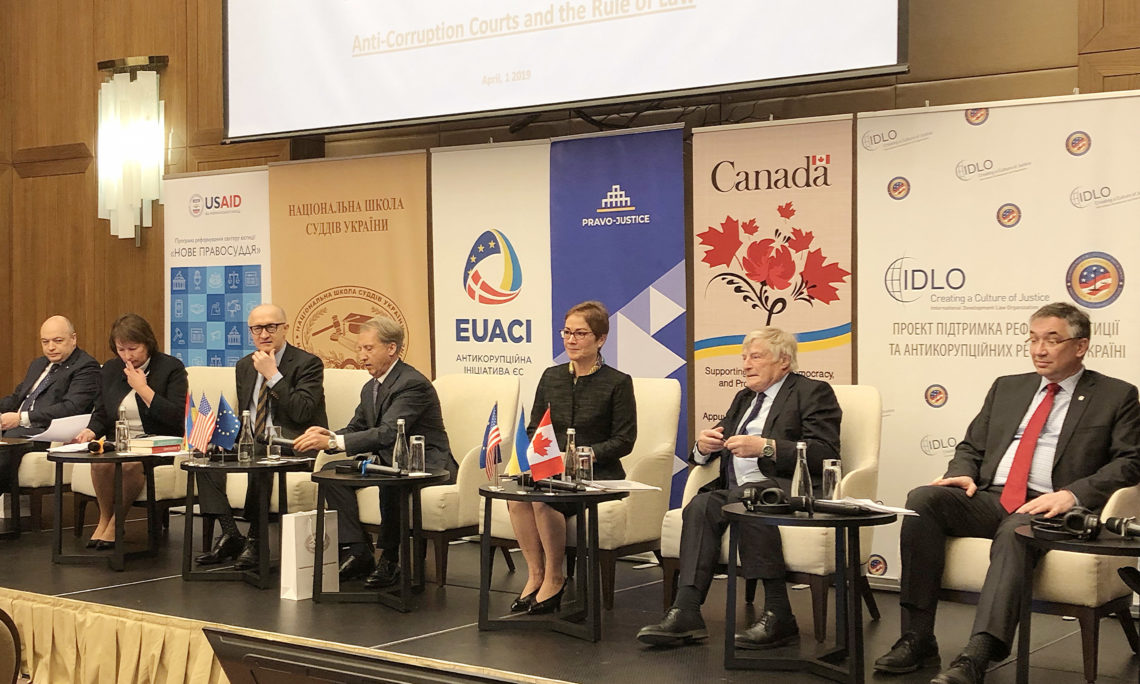 I am thrilled to be here today, on this day, to help launch the High Anti-Corruption Court orientation program.

And I want to say hello to all of our distinguished panelists here today, as well as everybody else.

But especially, I want to say hello to the new judges that have recently been selected.  And can you all raise your hands?  Who are the new judges in this room?  I know there are more.  Aren’t there more?  That’s it?  And can we just give them a round of applause?

Because I think I speak on behalf of all of us that we congratulate you and we applaud you for your commitment and your courage in taking on this hugely consequential responsibility for Ukraine.

I want to say that I think it is significant that we’re meeting with all of you here today – on a day after millions of Ukrainians went to the polls and voted for the next president of Ukraine, whoever that might be.

And while we’re all waiting for the official results, here is one thing that I think everybody in this room knows — which is that despite the uncertainties of elections, and all of that — Ukrainians have been remarkably consistent about their priorities since the Revolution of Dignity.

And at the top of that list is, first of all, a successful conclusion to the war in the Donbas.  Secondly, a prosperous economy for Ukraine, for all Ukrainians.  And thirdly, a government that respects their rights and treats all citizens equally under the law.

There are so many reforms that have progressed over the past five years. But it’s difficult, I think, to dispute that the fight against corruption is the reform for which the Ukrainian people have fought the hardest, and waited the longest.

We have, of course, seen significant progress on this front, beginning with the establishment of anti-corruption institutions such as NABU and SAPO, and there are so many other areas as well.

But I think it’s also fair to say, that progress has not yet lived up to the expectations of the Ukrainian people.  And that’s where you guys come in.  This is why the High Anti-Corruption Court has been established – a specialized court to adjudicate high-level corruption cases is absolutely critical.

And it’s why the U.S. and other partners in the room have invested so much to ensure you are well-resourced, empowered, and deserving of public confidence.

Since 2016, the U.S. and others — including the people on this panel — have supported the exchange of international best practices, regional discussions, and provided expert support to build consensus on what should this High Anti-Corruption Court actually look like.  I mean, you are breaking new ground, new legal ground, new political ground.

And we have also worked with stakeholders in developing a common understanding for this court, including the important role of the Public Council of International Experts in vetting candidates, which was ultimately codified into law.

We continue to work with Ukraine and donor partners to ensure that the court is truly empowered and resourced to fulfill its mandate.

And I think as everybody recognizes, this is not the end of the process, it’s really only the beginning.  As hard as it has been to get to where we are today, it’s the beginning.  And you are beginning at a momentous time.  Regardless of the outcome of the elections, the importance of meaningful progress on anti-corruption and judicial reforms is only growing.

Progress in these areas is at the heart of not just democratic governance and economic growth, but Ukraine’s national security.  Even if a country’s army is strong and capable — like Ukraine’s army is — if its institutions are hollowed out by corruption, that is a vulnerability that no country can afford.

Moreover, a country seeking integration with the European Union, with NATO, must ensure that its actions — not just its statements — reflect the core Euro-Atlantic values of the rule of law, equal opportunity, and dignity.

The program that you are beginning today in this room and over the next three weeks … this program is designed to help you fulfill your new role in Ukraine’s democratic trajectory.

But what I really want to say is that while we have taken a lot of care designing this program and we hope that it’s useful for you, the most important element in fulfilling your role is actually the qualities that you are bringing to the table.  Your professionalism, your independence, your values – this is why you all were selected for this role and this what we hope you will bring to your judgements, that are just so important to the Ukrainian people.

You know, as has been said a number of times before, the expectations of the Ukrainian people are very high.  But I know that they’re no higher than your own expectations of yourself.

It’s a historic moment and we have full confidence that you are going to meet this moment with honor and with integrity.