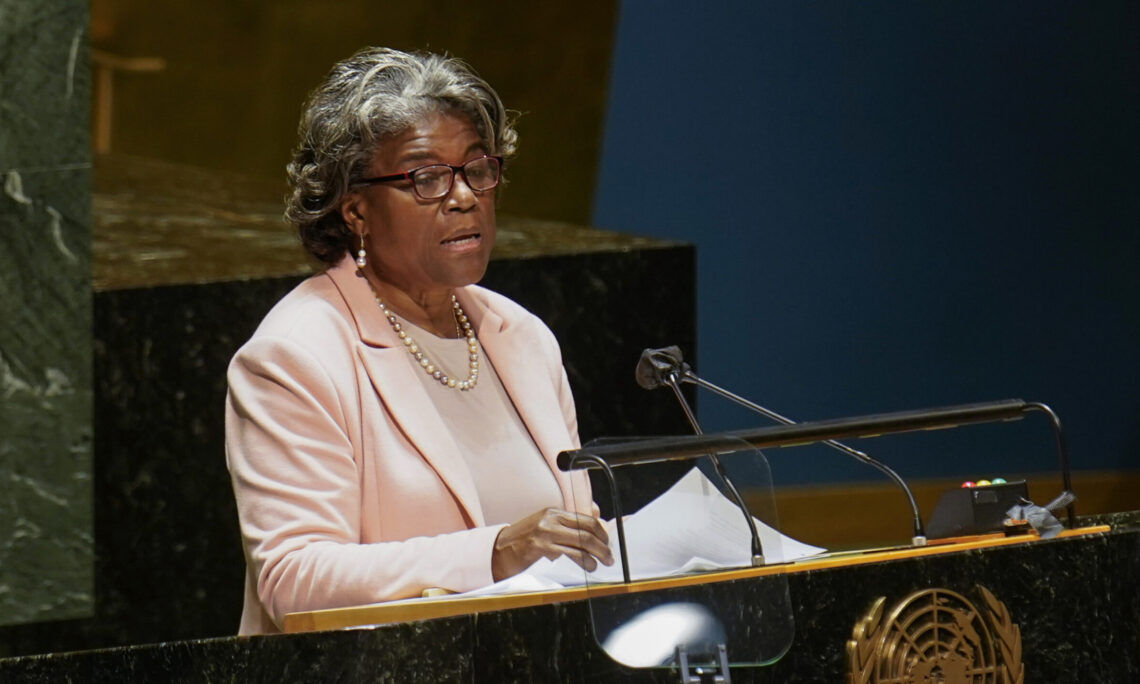 Linda Thomas-Greenfield, United States ambassador to the United Nations, speaks during a meeting of the UN General Assembly, Wednesday, March 23, 2022, at United Nations headquarters. The United Nations will face three resolutions Wednesday on the worsening humanitarian situation in Ukraine after Ru

Thank you, Madam President. Let me also start by thanking UAE and Ambassador Nussebeh for her successful presidency during the month of March. Madam President, as you begin your Security Council presidency, I want to thank the United Kingdom for your leadership and for organizing this vital discussion on Ukraine, today. I also want to thank the Secretary-General for his remarks and the other briefers. And I’d like to extend a warm welcome to President Zelenskyy. I was so moved by the address he made recently to our Congress, and we are truly honored by his presence here under the circumstances that he and Ukraine face, today.

Madam President, last night, I returned from a trip to Moldova and Romania. I saw with my own eyes the refugee crisis caused by Russia’s unconscionable war. I spoke to refugees who indicated to me their desires to return to their home. And we’ve all seen the images on TV of the bombed-out buildings. But what we have not seen is that behind those destroyed buildings are destroyed lives and destroyed families. I met with women and children who had fled Ukraine, who stuffed their lives into backpacks and left the only home they had ever known. And these were sobering conversations.

One young woman I spoke to came with her six-year-old brother, who has autism and is struggling with cancer. Their single mother helped them escape to save their lives, but Russia’s war has interrupted the care her brother desperately needs.

Another woman I spoke to fled with her eight-year-old from Odesa. The father, who they had left behind, told them there was shelling right next to their apartment that very night – and they very well could have died had they not left.

A third woman I met told me that she used to love to travel – but never expected her next trip would be to flee for her life. When I asked her where she was from, she started to say, and then she stopped with tears in her eyes and said, “I’m sorry. I don’t know how to say it: whether I live in Kyiv, or whether I used to live in Kyiv.” She was realizing, in the moment, just how dramatically her life had changed because of this senseless war.

These are three stories of more than 10 million people – six million internally displaced, four million who have left Ukraine altogether. Four million people who have relied on the big-heartedness of countries like Moldova, Romania, Poland, Slovakia, Hungary, and others across the region and the world to welcome and support all those leaving Ukraine in search of safety. Ukraine’s neighbors are bearing the brunt of Europe’s most significant refugee crisis since World War II. And I want these countries to know that they have a committed partner in the United States.

And that is why the United States announced recently that we are prepared to provide more than $1 billion in new funding toward humanitarian assistance for those affected by Russia’s war in Ukraine and its severe impacts around the world. And it is why we are welcoming up to 100,000 Ukrainians and others fleeing Russia’s aggression to the United States. We will continue to assist humanitarian efforts to help the people of Ukraine and all those fleeing Putin’s violence.

But as heart-wrenching as the stories are that I heard in Moldova and Romania, there are some stories we will never get to hear: those of the people we saw in the images out of Bucha. We have all seen the gruesome photos. Lifeless bodies lying in the streets, apparently summarily executed, their hands tied behind their backs. As we work to independently confirm the events depicted in these images, I would remind this Council that based on the currently available information, the United States has assessed that members of Russia’s forces have committed war crimes in Ukraine.

And even before seeing the images from Bucha, President Zelenskyy, along with others in the region, were reporting that children were being abducted – and we heard him that today. Also abducted are mayors, and doctors, religious leaders, journalists, and all who dare defy Russia’s aggression. Some of them, according to credible reports – including by the Mariupol City Council – have been taken to so-called “filtration camps,” where Russian forces are reportedly making tens of thousands of Ukrainian citizens relocate to Russia.

Reports indicate that Russian Federal Security agents are confiscating passports and IDs, taking away cellphones, and separating families from one another. I do not need to spell out what these so-called “filtration camps” are reminiscent of. It’s chilling and we cannot look away.

Every day, we see more and more how little Russia respects human rights. And that is why I announced yesterday that the United States, in coordination with Ukraine and many other UN Member States, will seek Russia’s suspension from the UN Human Rights Council.

Given the growing mountain of evidence, Russia should not have a position of authority in a body whose purpose – whose very purpose – is to promote respect for human rights. Not only is this the height of hypocrisy – it is dangerous. Russia is using its membership on the Human Rights Council as a platform for propaganda to suggest Russia has a legitimate concern for human rights. In fact, we will hear some of that propaganda here today, I know, and I will not dignify these lies with a response – only to say that every lie we hear from the Russian representative is more evidence that they do not belong on the Human Rights Council.

A hundred forty UN Member States voted to condemn Russia over its unprovoked war and the humanitarian crisis it has unleashed upon the people of Ukraine. Here is my message to all of you: Now is the time to match those words with action and show the world that we can work responsibly. And I share President Zelenskyy’s view that this moment requires responsible world powers and global leaders to show some backbone and stand up to Russia’s dangerous and unprovoked threat against Ukraine and the world.

The Secretary-General said that confronting this threat is the Security Council’s charge. It is. And it is also the responsibility of UN leaders and leaders around the world – every single Member State with a voice in the GA. No one can be a shield for Russia’s aggression. Suspending Russia from the Human Rights Council is something we, collectively, have the power to do in the General Assembly. Our votes can make real difference.

Russia’s participation on the Human Rights Council hurts the Council’s credibility. It undermines the entire UN, and it is just plain wrong. Let us come together to do what is right – and do right by the Ukrainian people. Let us take this step to help them to start to rebuild their lives. And let us match the courage of President Zelenskyy, who we are so honored to have with us today.

President Zelenskyy, I want you to know that we stand with the people of Ukraine as you face down this brutal attack on your sovereignty, on your democracy, and on your freedom.