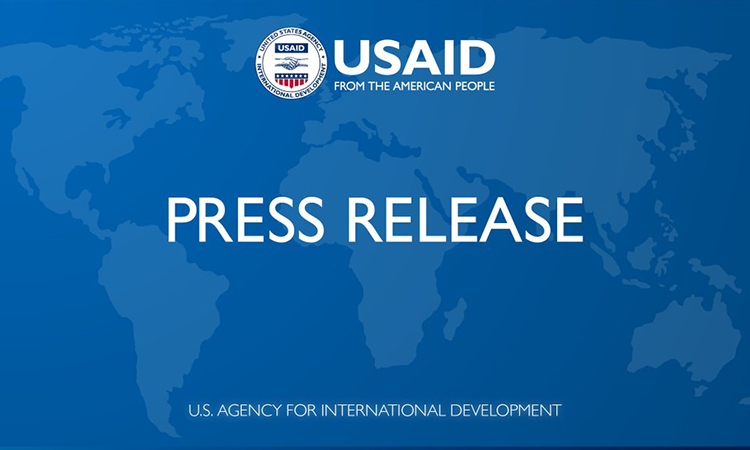 ADMINISTRATOR POWER: Thank you so much, Prime Minister Shmyhal. President Zelenskyy, thank you for the profound privilege of joining you, and so many distinguished leaders from around the world, on this day of solemn remembrance.

Just steps away from our nation’s Capitol building, the United States, as you well know, has erected its own memorial of the Holodomor, honoring the millions of innocent Ukrainian women, men, and children who perished in this man-made Famine, and whose deaths Stalin tried to keep secret from the world.

The memorial is a 30-foot wide sculptural wall and it depicts, in blackened bronze, shafts of Ukrainian wheat standing tall and lush. But as you trace the sculpture from its beginning to end, the wheat begins to thin, until, at the very end, it recedes into nothingness. All that is left is a void.

The sculpture was designed by Ukrainian-American architect Larysa Kurylas, and when she was asked what she hoped visitors would take from viewing the memorial, she said: “I hope they pause to reflect on the horrors of man-made starvation.” But that isn’t the only purpose of the memorial. She added that she hopes it serves as a call “to eradicate hunger… worldwide.”

Today, on this anniversary of the Holodomor, one of history’s most depraved assaults, Ukraine gathers the world – not as a victim. Not as a survivor. But as a leader. Ukraine has chosen this day to demonstrate that even in the face of unrelenting, brutal attack, it remains a generous nation.

That even as missiles fall from the sky, and Vladimir Putin attempts to wield energy, water, and – yes – food, as weapons of war, Ukraine’s brave farmers will step forward. That they will don body armor to sow and harvest their fields to guard against landmines and other unexploded ordinances. That they will ship grain that will help feed some of the more than 200 million people at risk of starvation – to help them avoid the fate Ukraine’s own people faced 91 years ago.

The United States is humbled to play our part in President Zelenskyy’s Grain From Ukraine initiative, contributing to this initiative an additional $20 million dollars to help mill and deliver grain to millions of people in desperate need of food in the midst of the worst food crisis the world has seen in generations.

We remain committed to doing all we can to make sure this war is not waged on the backs of the world’s poor. It’s why we are also donating billions to provide desperately needed humanitarian aid. It’s why we launched something called AGRI-Ukraine: a comprehensive initiative to strengthen Ukraine’s agriculture in the face of Russia’s attack, providing lifelines to the country’s farmers; standing up grain storage capacity to help make up for infrastructure the Russian military has destroyed; and helping them export grain by truck, rail, and river, as well as through the Black Sea. And it is why we are standing by Ukraine’s side today as a partner in the Grain From Ukraine initiative.

Ukraine is not only commemorating history today; Ukraine is making history. And the United States is honored to be a part of it – not solely to reflect on past horror and anguish, but to prevent catastrophic suffering in the present.

Thank you so much.