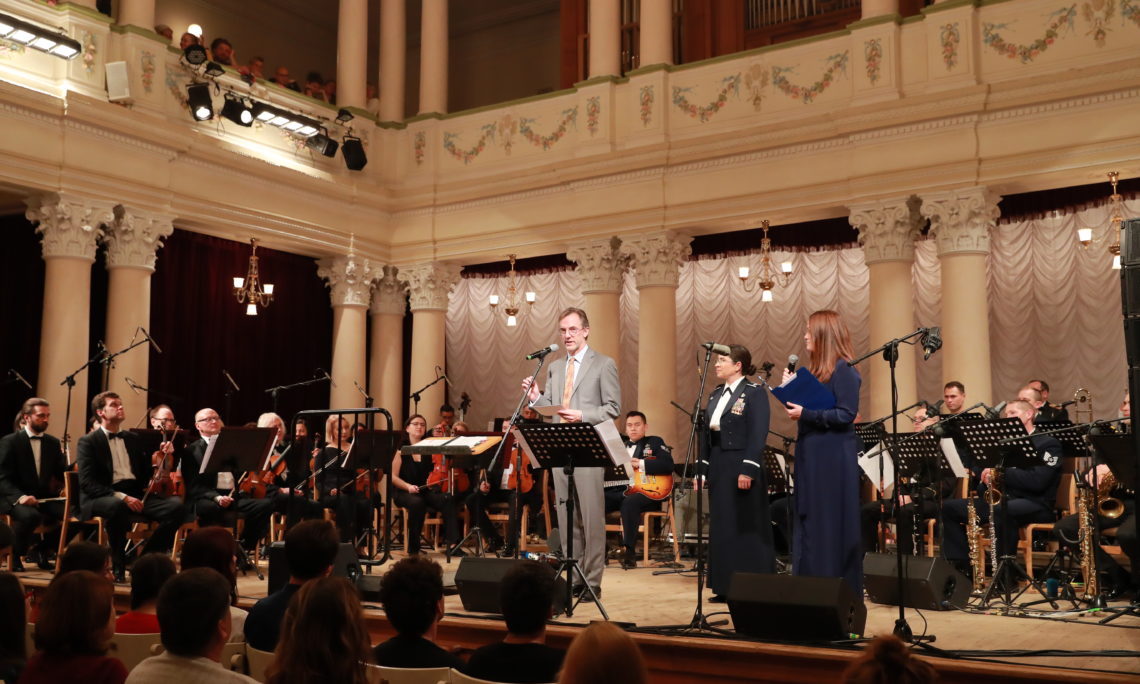 Good evening, everyone. It’s an incredible pleasure for me to join all of you here tonight for this Music of Freedom concert presented by the U.S. Air Forces in Europe Band in collaboration with members of the Kyiv Chamber Orchestra of the National Philharmonic, soloists of the National Presidential Orchestra, and eastern front veteran Anastasia Shevchenko.

This band has toured extensively around Europe and Africa, inspiring audiences with their music of freedom and friendship.

In the words of the American poet Henry Wadsworth Longfellow, “Music is the universal language.”

And another American writer, Sarah Dessen, noted that “Music is the great uniter.  An incredible force.  Something that people who differ on everything and anything else can have in common.”

But those of us in the hall tonight have much in common.

Tonight, you will hear music that celebrates the spirit of freedom that both of our countries embrace.

As the band performs American favorites from the era of World War II, we hope you will feel the support and commitment to democracy that our two countries cherish.

We hope you will also recognize the power of the enduring partnership between the United States and the Ukrainian Armed Forces.

In fact, tonight marks the final performance of a two-week tour around Ukraine dedicated to Defender of Ukraine Day, in a show of solidarity with Ukrainians who are defending your nation’s sovereignty even tonight.

Before the concert begins, I would also like to take this opportunity to thank the Ministry of Culture, Youth, and Sports for supporting this program tonight and joining with us.

As a token of our appreciation, I would invite Deputy Minister of Culture, Youth, and Sports Iryna Podolyak to the stage, where U.S. Air Forces in Europe Band Commander and Conductor, Lieutenant Colonel Christina Moore Urrutia will present the Deputy Minister with a certificate of excellence for the Ministry.

We look forward to continued collaboration with you and your Ministry.  I now give the floor to Deputy Minister Podolyak.