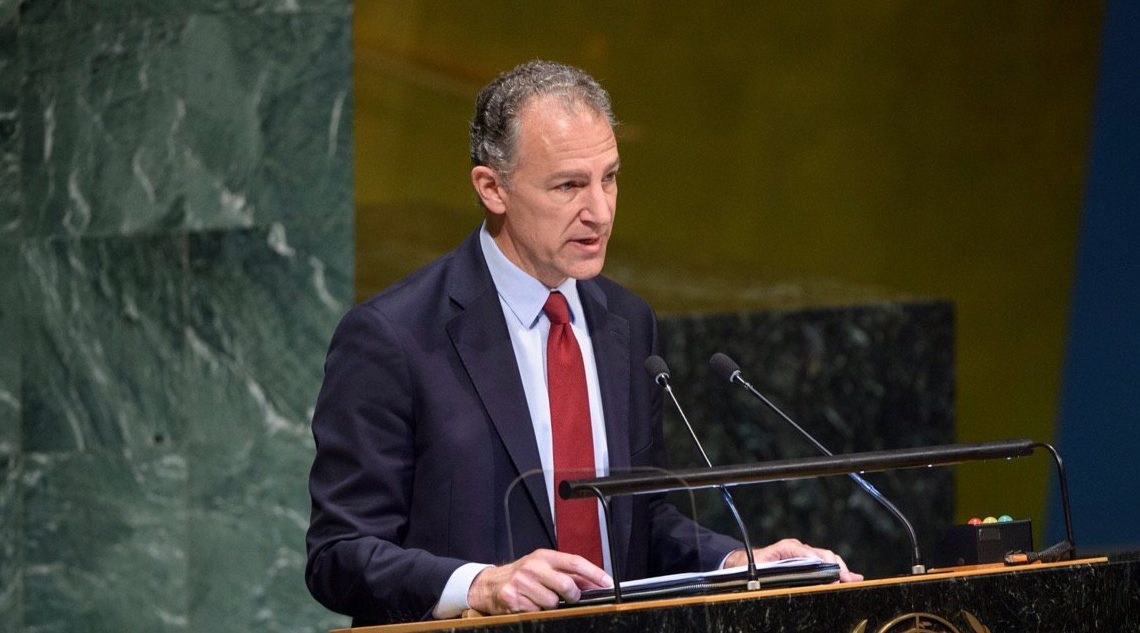 The United States would like to thank the President of the General Assembly for hosting today’s important meeting, and welcome President Poroshenko. Thank you for joining us today.

Five years ago, the world bore witness to Russia’s brazen occupation and purported annexation of Crimea and its intervention in eastern Ukraine. Russia continues to lead and fight alongside its proxy authorities in the Donbas, despite commitments in the Minsk agreements that call for a ceasefire, the withdrawal of foreign armed formations and the disarmament of illegal groups. Within only a week of signing, Russia grossly violated the agreements by ordering tank units manned by Russians to take the key rail hub of Debaltseve, killing over 100 Ukrainian soldiers and seizing hundreds of square kilometers on the Ukrainian side of the September 19th Line of Contact to which Russia itself had agreed. Some of the Ukrainian soldiers captured in Debaltseve remain held by Russia four years later, again in violation of the Minsk pledge to release all captives.

Moscow continues to destabilize Ukraine and attempt to make it subservient to Russia. In reality, Russia is pushing Ukraine and its people farther away from Russia and strengthening Ukraine’s resolve to defend its freedom and independence. The international community should remain united in support of Ukraine and impose costs on Russia for these attempts to undermine Ukraine.

The United States firmly stands with Ukraine in the face of Russia’s aggression, and we are committed to the success of a stable, prosperous, democratic, and free Ukraine. As we’ve repeatedly said: the United States does not, and will not, recognize the Kremlin’s purported annexation of Crimea. We will never accept anything less than the full restoration of Ukraine’s territorial integrity. Our Donbas-related sanctions will remain in place until Russia fully implements the Minsk agreements. Our Crimea-related sanctions will remain until Russia returns control of the peninsula to Ukraine.

As we approach the fifth anniversary of Russia’s illegal seizure and occupation of Crimea, Russia has regrettably provided a fresh reminder of why the international community must remain firm, when Russia attacked and seized Ukrainian vessels and crewmembers in the Black Sea on November 25, 2018. We call on Russia to immediately release the vessels and crew and cease obstructing, delaying, and harassing the transit of vessels in the Kerch Strait to and from Ukrainian ports.

Russia attempts to justify its aggression against Ukraine by saying it is defending Russian-speaking people. However, Russian aggression has been disastrous for the people living in those regions who have seen the humanitarian situation continue to deteriorate. The UN estimates that this conflict has taken over 10,000 lives. Beyond that toll, 1.5 million people have been internally displaced, and 3.5 million are in dire need of humanitarian assistance.

The elderly, who account for most of the crossings at the contact line between the government and non-government controlled areas of Ukraine, face treacherous conditions in their journey to see relatives and access Ukrainian government services. Many others have been hurt and maimed by episodic violence, heavy weaponry, and the hidden menace of landmines. The profound impact of the conflict doesn’t end there. More than 1.1 million people are food insecure or need support, and schools, universities, and business struggle to operate.

In Crimea, Russia engages in a campaign of coercion and violence to suppress any voice that questions Russia’s occupation, including through misusing counter-terrorism and so-called anti-extremism laws to suppress dissent, as Russia attempts to further consolidate its occupation of the peninsula. Russian occupation forces also raid, harass, detain, deport, and forcibly conscript members of the Crimean Tatar community, ethnic Ukrainians and others who support Ukrainian sovereignty over Crimea.

The United States calls on Russia to immediately release the over 70 Ukrainians it has unjustly imprisoned, including Oleh Sentsov, Oleksandr Kolchenko, Volodymyr Balukh, and Ruslan Zeytullayev.

Russia has also created a hostile and dangerous environment for journalists and media workers, human rights defenders and defense lawyers to perform their work independently and without interference in Crimea. Russia must ensure the proper and unimpeded access of international human rights monitoring missions and human rights non-governmental organizations to Crimea and cease any abuse against individuals there, without any discrimination.

The United States will continue to draw on the range of measures we have at our disposal, including diplomacy, sanctions, and security assistance to support Ukraine and make clear to Russia that the only resolution the international community can accept is the end of Russia’s efforts to undermine Ukraine’s sovereignty and territorial integrity. We’ll continue to coordinate our efforts with the many other countries supporting Ukraine.

Ukrainians have repeatedly shown that they will not be deterred from charting their own course and the United States will stand with the Ukrainian people until there is an end to Russian aggression.