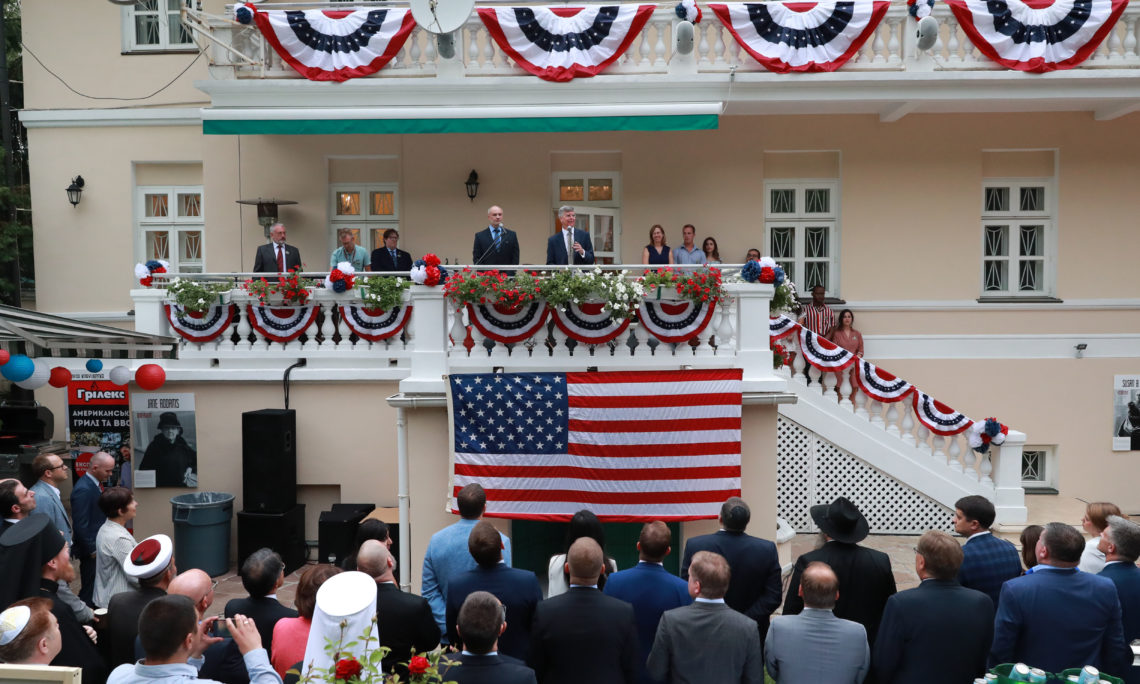 Sorry for my Ukrainian – and I thank Vadym for helping me out – I had no idea that I would be able to come back to Ukraine.

Welcome to our celebration of the 243rd anniversary of the Declaration of Independence of the United States of America.

Let me extend my thanks to Khrystyna Soloviy – we have two Kristinas here — and also our Peace Corps Volunteers [for performing the national anthems]. Very nice job, thank you.

A second Kristina – she is my Deputy. Kristina Kvien is Deputy Chief of Mission here at the U.S. Embassy. And I am very pleased to be working with Kristina. She has been here longer than I have, but this is her official welcoming party. This is quite a turnout for your party.

I am delighted to be back in Ukraine and thank you for joining us as we celebrate this anniversary of our independence from Great Britain.

We are celebrating our independence, but we are also honoring the contributions of Ukrainian and American women.  You will have seen some of the posters around the grounds, and they show the faces, but also tell about their accomplishments. Their achievements span decades and venues from concert halls to conference halls, from tennis courts to law courts, from baseball fields to battlefields.

I am particularly pleased that some of them are going to try to be here this evening: Oleksandra Matviychuk – winner of the Democracy Defender award; Yevhenia Zakrevska – lead lawyer for the families of the Heavenly Hundred; Yana Klochkova – the first woman to win consecutive pairs of Olympic gold medals in the same events – she is known as the “Medley Queen.”

We recall today that America’s Declaration of Independence was just the beginning: recognition of our independence would come after several years of bitter struggle, and it would take several generations of bitter struggle to begin to fulfill our founding ideals of equality and universal rights.  Only in 1920, thanks to the courage of women like Susan B. Anthony and Lucile Atcherson Curtis, did women win the right to vote in the United States.  Our history reminds us that democracy is not static, it’s an ongoing process of gradual perfection.

We see elements of our own history reflected in Ukraine today.  Ukrainian men and women in the east are fighting to defend freedom for all Ukrainian citizens, no matter where they live within Ukraine, including Donbas and Crimea.  We honor all service members and veterans—American, Ukrainian, allies and partners — for their sacrifices.

The whole world has noticed the success of the presidential elections recently. And I am very confident that the Rada elections coming up in a couple of weeks will be equally transparent and competitive.

Of course, there are challenges for Ukraine — just like all democracies, including mine — but the United States is committed to the success of Ukraine as a stable, prosperous, democratic, and free European country.

Enjoy your evening and join us in all the festivities that follow tonight! Thank you all very much for coming.