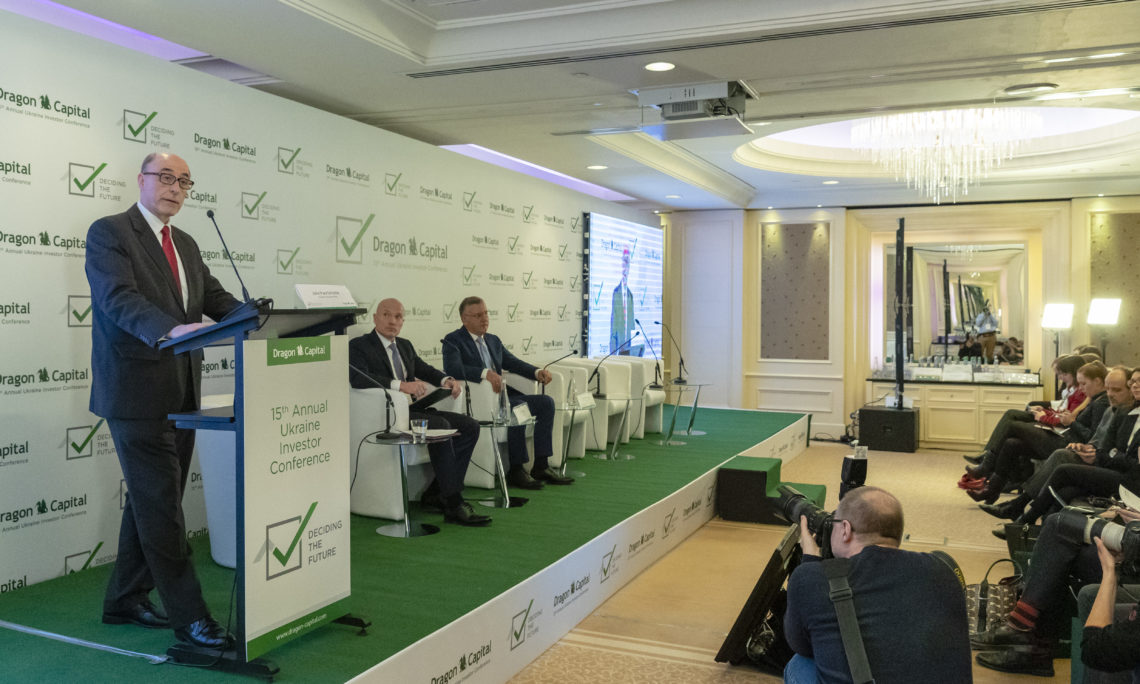 Thank you.  I heard the cheers of welcome, or I think it was a groan of disappointment, but I’m very happy to be here. It’s been real pleasure to sit here all morning.  But I am delivering the message that the Ambassador wanted very much for the people who are attending here today to hear.  And I do apologize [that she] isn’t able to be here this afternoon.

As we prepared these remarks, we asked ourselves what would be of most interest to you, an audience of investors.

What are your top priorities as investors?

A large majority of Ukrainians consistently support three general priorities: a successful end to the conflict with Russia, a prosperous economy, and a government that provides a rule of law that respects the rights of all people equally.

In many ways, that is what investors are looking for as well.  A country at peace, with a growing economy, and a legal system that operates predictably and fairly.

These priorities have also been the bedrock of the United States’ partnership with and investment in Ukraine.

In fact, since 2014, the United States has invested almost 3 billion dollars in security and other assistance to Ukraine.

We will continue to provide steadfast support to Ukraine’s security, economic, and political and legal reforms.

On the security front, we stand by the brave men and women of Ukraine’s armed forces and will continue to support them.

Still, the United States believes there is no strictly military solution to Ukraine’s conflict with Russia.

A diplomatic solution is the best option, and the cornerstone of our diplomatic strategy is the Minsk Agreements.

Reaching a diplomatic solution will not be easy, but we will continue to support the diplomatic process.

Turning to economic prosperity, supporting economic reforms continues to be one of the United States’ highest priorities in Ukraine.

While reforms may not move forward as quickly as we would all like, it is important to note the progress Ukraine has made in 2018 and the optimism many businesses hold for 2019.

Last year, the Rada passed and the President signed laws:

If you, as I, were here throughout this morning sessions, you heard some of the authors of these reforms and many of the other commentators refer to all of these important reforms.

We also saw solid progress on implementing reforms in areas such as healthcare and decentralization.

The reform of the National Bank of Ukraine over the last five years is one of Ukraine’s greatest achievements — and one of particular importance to investors.

The building of a strong, independent central bank has been one of the foundations of Ukraine’s economic progress.

Of course, this congratulation for the successes to date does not mean that Ukraine is done reforming.  More needs to be done this year.  And we will continue to welcome reforms in areas such as opening up the upstream energy sector to additional investment, improving governance of state-owned enterprises, and making progress on privatization.

It’s also worth noting that the United States Export-Import Bank is once again doing business in Ukraine.  And our Congress has doubled funding worldwide for the United States Overseas Private Investment Corporation, or OPIC, to support private investment that promotes the broad base growth Ukraine needs.

So the United States will continue to look for ways to support good business deals in Ukraine.

Economic reforms must be matched, however, by the strengthening of an effective, fair rule of law – the third priority area I mentioned.

Only Ukraine’s creation of a strong, transparent, well-administered rule of law will allow it to attract the kind of investment needed to make Ukraine’s economy really take off.

Successful anti-corruption reforms are critical to achieving this goal.  Only empowered, independent anti-corruption institutions can apply the law equally to all citizens, regardless of wealth or power.

Now, that is why taking steps such as selecting independent, qualified judges for the new anti-corruption court is so important.

Which brings us back, in a way, to Ukraine’s national security.

The economic and rule of law reforms are important to attracting investors like you and building a prosperous, strong Ukraine and ensuring Ukraine’s economic integration with the Euro-Atlantic area.

But building a prosperous, strong, democratic Ukraine, and such Euro-Atlantic integration, is in the long run the best way for Ukraine to frustrate Russia’s malign hegemonic intentions.

Another way Ukraine can frustrate Russia’s aspirations is to hold free and fair elections.  Ukraine as a dynamic, thriving democracy presents a stark contrast to the Kremlin’s authoritarian ways.

You have had the opportunity today to hear from some of the presidential candidates as campaign season is in full swing.

And as you know, the Embassy is often asked which candidate the United States supports in the upcoming election.

I’m going to answer that for you there.  We support the Ukrainian people.

We have stood shoulder to shoulder with Ukraine through five years of revolution and war.  The Ukrainian people’s goals are our priorities.

We will continue to stand with Ukraine as it moves forward on the path it has chosen towards peace, stable and strong economic foundations, and security in principled and uncompromising western values.