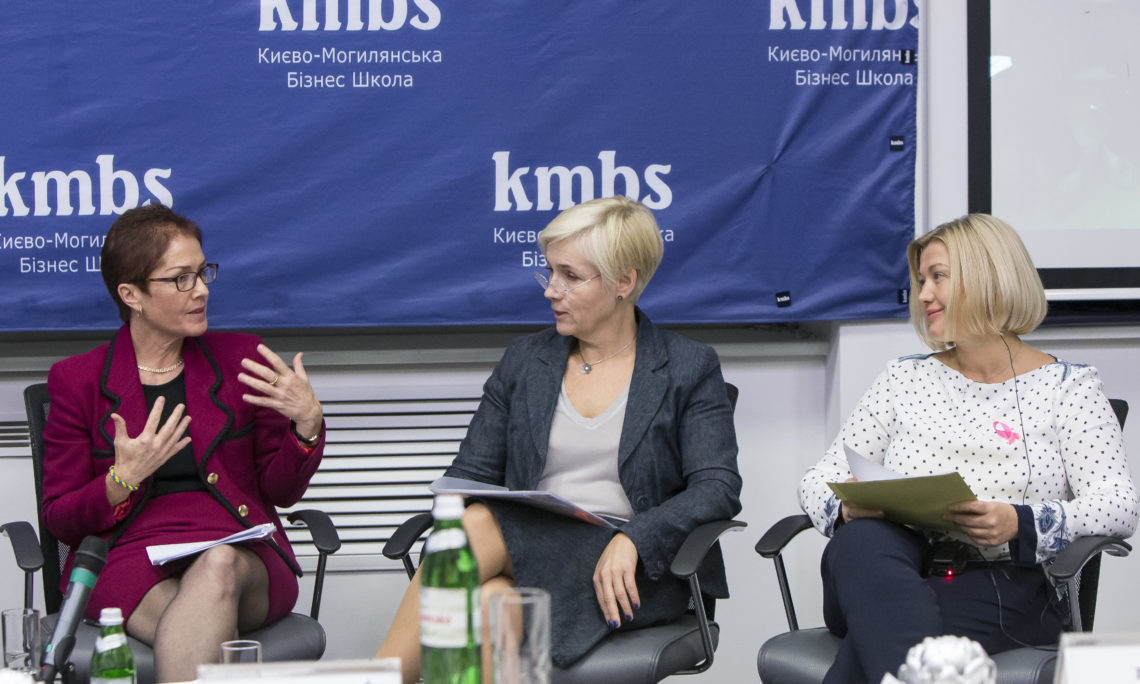 Thank you so much for inviting me to speak at this event.

The role of women in government and, indeed, society is one near and dear to my heart.

Many of you are already active reformers, and I thank you for your hard work and commitment.

But, as every woman knows, going it alone is not an option.

We must support, inspire, and mentor each other; and men should also be part of this conversation.

That’s what is so important about the establishment of this network:  inspiring and growing the next generation of female leaders to become Defense and Prime Ministers, or Presidents.

We see it as a “коло довіри” for cross-cutting discussions to advance the important work you are already doing.

This network is not merely a token performance designed to lend your government the veneer of gender inclusiveness. Members already hold key positions, and many are here tonight.

But like so many countries around the world, including my own, women in Ukraine remain significantly underrepresented.

Yet, far less than one third of elected officials are women.

Only 52 serve as Rada Deputies out of 423 occupied seats.

To initiate and maintain sustainable reform, Ukraine would benefit from a more balanced gender ratio in influential positions.

This is why the UN Security Council adopted historic Resolution 1325, committing member states to gender considerations and drawing attention to the disproportionate impact of conflict on women; our exclusion from peacekeeping and peacebuilding; and our role as stabilizing forces for both our own families, as well as fraying communities at-risk of extremism or separatism.

While 1325 did not end insecurity and conflict, it makes clear that women must be part of the process for it to succeed.

The UN’s growing body of evidence indicates that negotiations shaped by women are more likely to endure; in fact, the chance of such agreements lasting 15 years goes up by as much as 35%!

Because women bring a different point of view to public service, tend to be more practical, and raise issues in negotiations that help societies better reconcile and achieve just, lasting peace.

“They get up before dawn, and spend hours harvesting crops, cooking for their families and tending to their younger siblings before heading to class.  After school, they work as maids and in factories, and they study for hours late into the night.”

I don’t know about you, but that sounds like just about every Ukrainian woman I’ve ever met!

And women already do lead in other spheres of Ukrainian life:  heading NGOs that provide important social services to veterans, IDPs, and their families; pressing for social policies that benefit all Ukrainians, regardless of gender; serving in the armed forces; and breaking down barriers simply by being themselves.

To succeed, nations require the collective brainpower, heart, and soul of the entire population, including both women and men.

As former Secretary of State Hillary Clinton once said:  “Whether ending conflict, managing transitions, or rebuilding a country, the world cannot afford to ignore half its population.”

That’s why the United States, in both its National Action Plan and work with partner nations, seeks to institutionalize strategies to expand women’s political, economic, and social opportunities.

We urge Ukraine to do the same.

And that’s what this budding network has the potential to do:  galvanize support and recognition for what Ukrainian women are already doing – and what more they could be doing, without the political, financial, and institutional barriers that hold them back.

As many of you already well know, Ukrainian women are lending their minds and their voices to helping push this country further into its European future.  Our organization will help them do even more.  Thank you again for your energy and commitment.