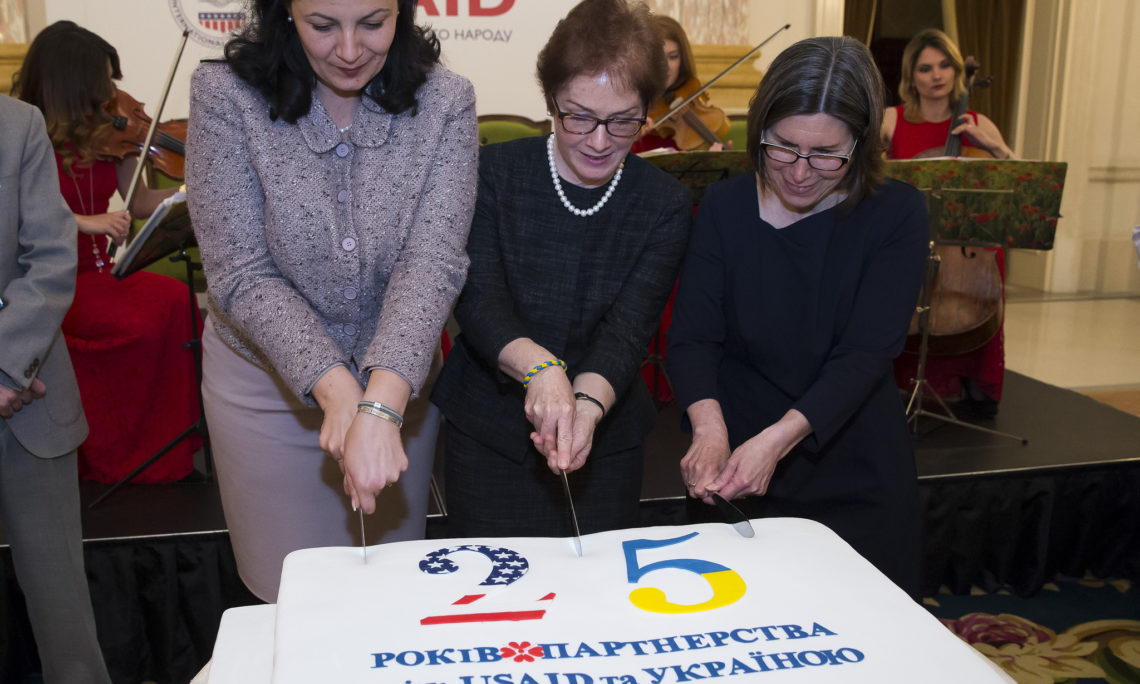 It is great to see so many friends and partners out there.  And if Susant hasn’t said that we needed to have a round of applause, I would have said that.  It’s great to be here for such a super occasion.

And of course, one of our best partners is Vice Prime Minister Klympush-Tsintsadze.  Ivanna, it’s fabulous to have you here to mark the day as well.

Listening to Susan’s remarks, I was really struck by the impact that US-Ukraine partnerships are having through USAID projects here .

Think about it – how many more Ukrainian mothers now today give birth in conditions that provide their newborn children a proper start in those precious first moments of life.

Think about all the TB patients who no longer need to be institutionalized and who now live normal lives, this can be any of us, as they undergo treatment.

And today, Ukrainian students can get into university because of their score on a national standardized test, and not because their parents paid extra fee somewhere along the way.

So, celebrating USAID’s 25th anniversary in Ukraine means marking 25 years of Ukraine and the United States, Ukrainians and Americans working together to help people. That investment of time and expertise has brought progress that is making a real difference in people’s lives.

As U.S. Ambassador, I learn about these life-changing things from my USAID colleagues. And it’s gratifying to know that the efforts of the American people, the efforts of USAID are having a real impact here.

But here’s the thing. These are not just American or USAID successes. They are also Ukrainian successes, because none of this could happen without a really strong and effective partnership between our two countries and our peoples.

We have partnered with successive governments and with the Rada.

We have supported Ukrainian-led non-governmental organization that have pushed for transparency and reforms and reminded elected leaders of their responsibilities to the Ukrainian people.

As Susan mentioned, I’ve served here before. And when I returned in the summer and had the opportunity to travel around the country and talk to people, I’ve just been amazed by the extent to which people here have changed and the country has changed .

I am impressed by the positive changes underway as well that doesn’t mean though that Ukraine doesn’t have a way to go still.  Essential political and economic reforms still must be made, corruption is still a problem in everyday life and in the system of governance.  It frustrates the Ukrainian people and it frustrates foreigners as well who want to invest in Ukraine.  But with our partnership, I think, we see a clear way forward to continue reform.

Let me just say that the United States will remain as strong partner of Ukraine as Ukraine continues to  make progress.  That has been the history of our partnership, and I am proud  that  Americans have stood alongside the people of Ukraine  since independence, for the ups and for the downs Looking forward 25 years from now, I hope that our successors and various organizations will also join together and talk about the great partnership that we have between our peoples and take stock of future successes in improving health, increasing transparency, further strengthening a  democratic, secure, and prosperous Ukraine.

As we look at our shared successes of the past 25 years, I’d ask each of us to re-commit to working together to nurture our impressive partnership to build even more successes for the future .