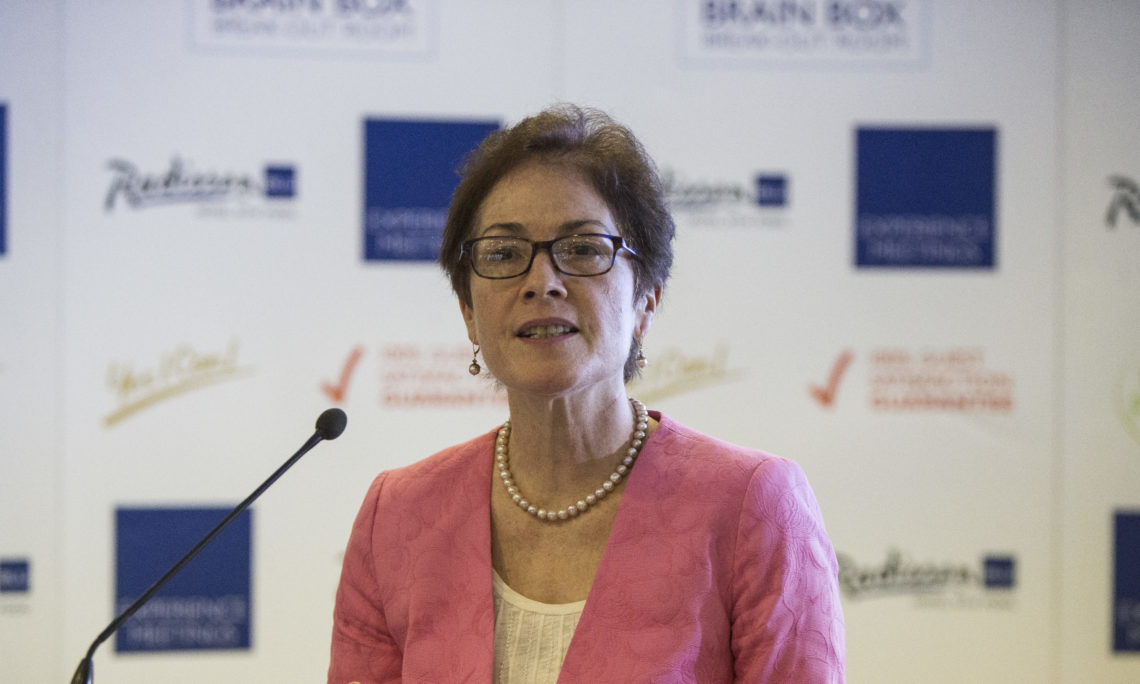 Good afternoon and thank you for inviting me to join you today.

I want to start with special thanks to Katia Vogt, country director of IREX, for organizing this alumni conference and to the many of you who have traveled from across Ukraine to be here.

Since 2002, more than 300 Ukrainian journalists and media managers have received hands-on training with U.S. media outlets and over 150 U.S. media professionals have visited Ukrainian partners to share best practices.

The media landscape today – and I don’t need to tell you this – has vastly changed in these last 15 years. Print media – my favorite – is quickly disappearing, and disinformation is coming at us with lightning speed.

The Ukrainian Media Partnership Program (UMPP) addresses and brings fresh ideas to these issues by creating partnerships between the U.S. and Ukrainian journalists.

So, let me give you one example of how this has worked over time. The Mykolayiv Center of Investigative Reporting – and I think there is someone here from that organization – operates a news website that exposes corruption. During a visit to Mykolayiv, American investigative reporters from The New York Times demonstrated techniques and shared resources they use for investigations.

The Center in Mykolayiv used one of those techniques, which included an online questionnaire, to investigate the quality of treatment in hospitals. Their investigation showed that doctors were double-charging patients for some procedures. And you know, when I think of patients being in hospital, first of all you think of someone who is very vulnerable, but secondly, it could be anyone of us or certainly somebody in our family – so it really touches everybody in Ukraine. These kinds of investigations that the Mykolaiv Center did can lead to improvements in healthcare and also in other areas.

Ukraine is living through a historic time of crucial reform. Changes to health care is one of these areas of reform.

Investigations like this one, are how reform education, and reform itself, takes place.

With all the talk about disinformation trust in the media is at a low point – understandably. Which makes the work that all you do all the more important. Also, well-run public broadcasters are among the media outlets most trusted to provide reliable news. We are proud to be supporting Ukraine as you develop your Public Broadcaster.

I think, sometimes the average Ukrainian – somebody’s grandmother, somebody’s best friend, who isn’t watching the politics the way all of you do – might not necessarily understand what is happening and the critical steps that are being taken. That’s certainly true in the United States and in other places in the world, as well.

We really believe that the best way forward for Ukraine – the best way to defend Ukraine’s sovereignty and to defend against external threats like Russian aggression – is for Ukraine to continue down the path of successful reforms .

It isn’t easy. And one of the challenges that Ukraine faces – that all of you actually face very directly – is disinformation.

It’s now more important than ever that Ukraine have reliable and independent news sources to combat weaponized information that can undermine reforms that support the path Ukrainians have chosen for themselves.

Hybrid warfare is a combination of instruments. I don’t think it’s well understood – certainly not even by me. Because it’s relatively new, it’s constantly changing, and it’s kind of a sneaky sort of warfare where you don’t always recognize what you are dealing with, as you are being confronted with it.

It’s economic pressure; military pressure, and it is information pressure – they actually call it the weaponization of information to manipulate public opinion – so that people don’t even really understand how they are being influenced in underhanded way.

Ukraine is on the front line of this particular war, and Ukrainian journalists are too, in terms of fighting lies and propaganda. The StopFake website, which you heard about earlier today, is now famous not only in Ukraine, but also well beyond Ukraine.

And after StopFake was established here, in 2016, we helped the Czechs launch a similar website in the Czech Republic.

StopFake demonstrates that you can be successful in fighting off disinformation. By learning from them you can succeed in fighting disinformation as well, just as the Czechs have. Reporting facts and being objective are key to making these projects successful.

Journalists must report the facts. They must reject the efforts of those who would buy their coverage. These are foundational principles of good journalism.

But this is what’s different in this new environment. We have all known that journalists have to share all sides of the argument so that the reader can understand what the different points of view are and come to a conclusion. But now, one of the sides, one of the points of view can be something that is completely made up – not real facts, not a real institution behind that fake website – and it goes on and on. That makes so much harder for all of us – whether you are in the public, whether you are working for a government, like I am, or whether you are a journalist, like you are – to try to figure out what is behind this point of view: is this a legitimate point of view that is supported by a body of scientific evidence or a group of real voters out there, or is it just something made up by some troll in a back room. So, it is important not to fall into the trap that the test of objectivity is to report both sides of an argument, even when one side is patently and transparently manufactured.

It’s a lot harder to be a journalist today, even with all the instant information – partly because of all the instant information. I think that is what make your jobs all the more important. Because it is hard for even for journalists or people like me to parse through what is the truth and what is a real point of view that I maybe don’t agree with, but actually represents real people out there that have that point of view. If it is hard for us to sort through that, think of how much harder it is for your readers and your viewers to sort through this, and think about how important this makes your job to be able to guide people so that they can have the information they need to make a decision. That is the cornerstone of a functioning democracy that people have real information to make real decisions that will affect their lives.

And I know it hasn’t always been easy. But I do hope that the best practices and success stories you have experienced when you have partnered with American journalists or that you have heard here today have made it a little easier .

This year the theme for World Press Day, which celebrates the fundamental principles of press freedom on May 3, is “critical minds for critical times.”

That is you. That is now. I can’t wait to see how you continue to use the experience you have gathered over the last 15 years within the UMPP project and also today, to see how you keep going forward.

I will stop there, because I think that I am between you and the buffet, and that’s a dangerous place to be in. I hope to have a chance to chat with some of you at the buffe.