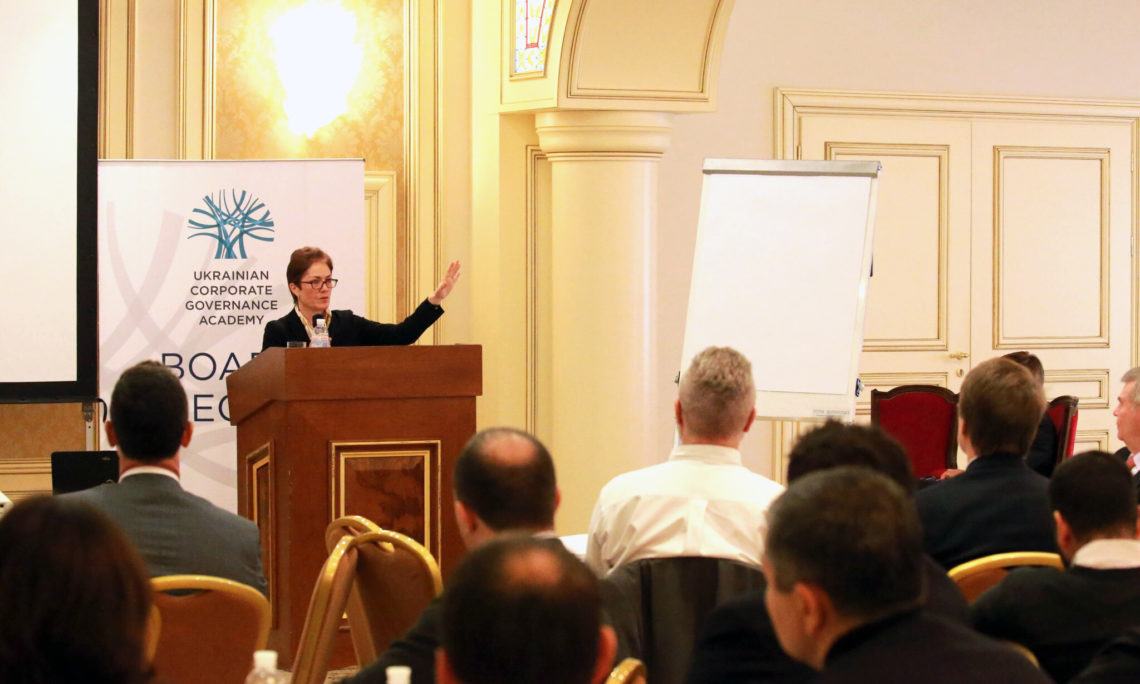 Thank you very much, and I apologize – can you hear me, do I need the microphone? Ok. I apologize for starting a little late today. (Inaudible) It’s a super important topic – the corporate governance issue is one that I think all of us believe is critically important, and yet it’s so little understood. And I would just say, did everybody come through the ballroom on their way in here, the haunted house? And you all know about the U.S. tradition of Halloween and scary things coming out, you know, sort of skeletons reaching out from the grave at you? And for me that’s, you know, actually a pretty good analogy to corporate governance. That if you don’t have good corporate governance, you’re going to have that skeleton reach out and drag Ukraine back into the grave of the past. And so, I mean that may be kind of an extreme analogy, but I can’t think of, I mean, there are many challenges before Ukraine right now. I think we all know that since 2014 Ukraine has taken up so many of those challenges and made so much progress over the last three and a half years.

There are still a lot of challenges out here. And I think corporate governance reform is one of them. The, you know, the structure of the state-owned enterprises is one that exists I think around the world, including the United States (inaudible) state-owned enterprises, not very many. Here obviously the sector is enormous. In fact, I don’t think anybody knows how many corporations the government of Ukraine actually owns. I mean, it’s somewhere in the figure of 3,000, I believe, which is a lot, and many of them are giants in their sector.

So, clearly it’s important that the government get a handle on this, and the way to make that happen is through people like all of you. I, you know, believe that Ukrainians rejected that kind of cronyism, but there is not yet a good model for good corporate…There’s a good model, but the Ukrainian government has not yet, I think, embraced the right model for good corporate governance. And I think we, at least, believe that that transformation can happen by adopting European and global models of rule of law, market economics, and democracy. And you know, institutions like this one play a hugely important role in that, teaching about organizational structures, rules, practices, and controls that constitute good corporate governance. Although I would say that that is not enough because I think it also takes a lot of political will, because the system as it has developed over the last, you know, 20, 100 years, whatever it’s been, depending on who you talk to — the system developed for a reason, which is that it benefits some. It doesn’t benefit all of Ukraine, or all Ukrainians. And so that’s the challenge that all you, whether you’re working in government or other areas , that’s a challenge for you to ensure that whatever the way forward is, that that fits Ukraine and the majority of Ukrainians, not just some few select private interests.

And when I look at the state-owned enterprises, I mean, it seems like such a tangle where management of state-owned corporations, they may report to the government on paper, but in fact they may actually report to a politician somewhere that is, you know, not in that structural scheme. Or they may report to somebody who is completely off the grid, you know, not really known to anybody, somebody who has a lot of power and is siphoning off that money for their own reasons. And that tangled chain of responsibility creates a real conflict of interest. I mean, there’s no other way of putting it. So, it’s important that there be clear and authoritative supervision to produce outcomes that would be in the best interests of the government of Ukraine on behalf of the people of Ukraine.

So Naftogaz is a good example. When Naftogaz became a priority reform after the Revolution of Dignity, because I think people understood, first of all, it was so important to the sector, number 1: importing 97% of its gas from Russia – the enemy, clearly something had to be done. And if it was possible to reform Naftogaz, then that sent a signal to the Ukrainian people that Ukraine was serious about reforming. And it sent a signal to Ukraine’s international partners whether it was the U.S., whether it was the IMF, others, that Ukraine was serious about reform. And we were, frankly, amazed at the progress that the government and Naftogaz management working together made to reform Naftogaz. And again, not saying that there isn’t lots and lots of more work that needs to be done, because there are many challenges in Naftogaz.

But this is a company that went from importing 97% of its gas from Russia in 2013 to 0% in 2016. That’s pretty incredible. And I think, if you had asked anybody in 2014 whether it was possible, everybody in this room, including me, would have said it was impossible. But I think that’s, it shows what one can do if there is commitment to the goal, and it’s hard. It’s very, very difficult, but it can be done. So, it’s, you know, it’s about applying international best practices, they developed a strong corporate governance plan that led to real change at Naftogaz.

But I think what we’ve seen, as I mentioned before, the process is not completed. And as some of you know, there’ve been recent challenges with the three independent board members recently, the last three remaining independent board members quitting Naftogaz because they were concerned about the progress being shown to date. So, right now the government is working hard to select supervisory board members that will be independent, professional, ethical. And, again, you know, it’s always hard to find the right people who can do all those things and frankly who are interested in getting into that tangle of challenges, but I know the government is committed to finding the right people for that board that would be independent, ethical, and professional. And I think that what’s going to be important is that good corporate governance rules, international standards be followed. So, the government clearly is preeminent, the government owns Naftogaz on behalf of the Ukrainian people, so the government gets to set the big goals, and the government hires the supervisory board. And the supervisory board, working with management, has to set up what the strategy is going to be. How do we want to achieve those goals? And so I think it’s important that Naftogaz move forward in that way and that Naftogaz be allowed to move forward in that way.

Same thing goes for Ukrainian Railways, which is about to begin the process of selecting a supervisory board.

It needs be an open one, a transparent one, as it should be for all state-owned enterprises.

I think that, you know, if Naftogaz and Ukrainian Railways get boards that are truly independent and can take decisions that are in the interests of all Ukrainian citizens, I think that will send a pretty strong signal again to the Ukrainian people but also to all your foreign friends who are applauding Ukraine as it moves along the path of reform.

So I want to thank you, Adomas, for the invitation to come to speak. I want to thank all of you who, I don’t know all of you but I know some of you, and I know you’ve got full time jobs and full time other responsibilities as well. But I really appreciate your commitment to being in this Academy, taking on these issues, and learning more about it because it’s vital, the job that the Academy is doing to help Ukraine integrate into the global economy and shed the vestiges of an inefficient economic system that, frankly, favored the few over, you know, the Ukrainian people.

So, again, thank you all of you for your commitment to this. Thank you, Adomas, for leading group and to the professors. I wish you a lot of luck today and as you move through the rest of your modules. Thank you.