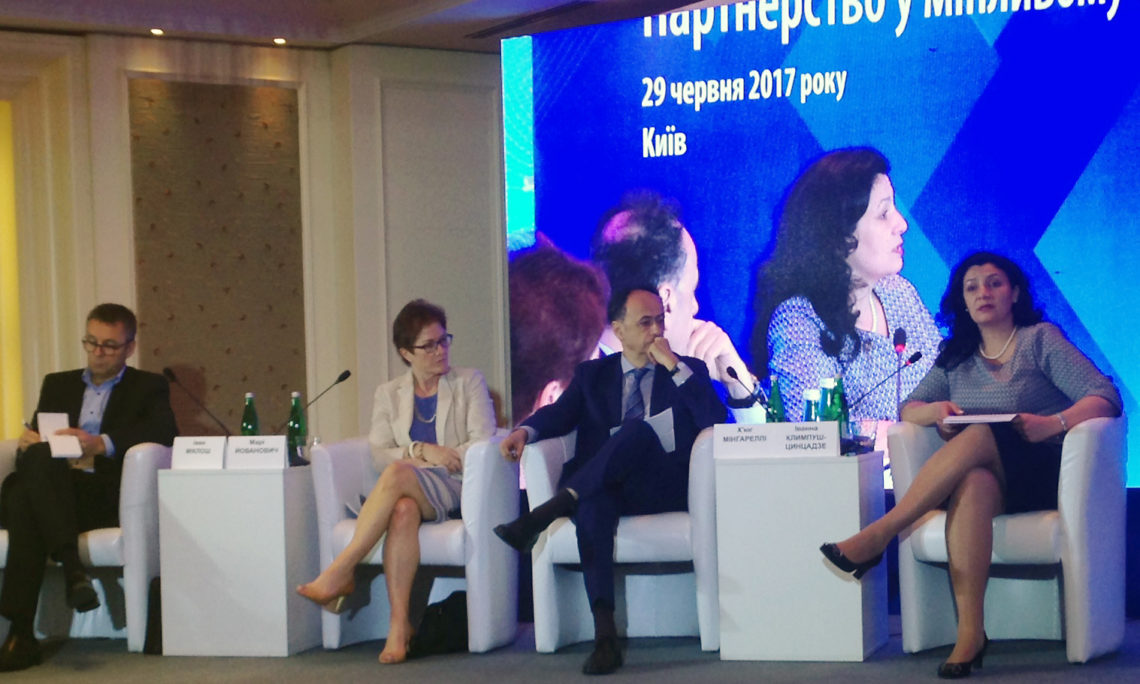 Thank you, first of all, to the Deputy Prime Minister of Ukraine and to Ambassador Mingarelli firstly. I think really interesting observations and it’s a pleasure to be with – to be here with everybody who has, I think, a shared dream of rapprochement with Europe, with the EU, and many of you have done much do realize that dream, and I think that’s important. And I think many of you may be wondering, so what is the U.S. Ambassador doing here, since I’m not Ukrainian, I’m not – I’m not European either, and the reason is pretty simple. The reason is that, Europe, the countries of Europe, the EU are our closest allies and partners. We share interests, we share values. And I think that Ukraine also shares those interests and values. And if there is a rapprochement with – between Ukraine and the EU, I think that is good, first and foremost of course for the EU, for Ukraine, but it’s also good for the United States.

Some of the steps that have already been taken have been listed, but I’d just like to note that I think it’s important that almost a thousand years after the very much discussed Anna of Kyiv traveled to Paris to become Queen of France, probably without a visa, Ukrainians can once again travel to France and other places in Europe without a visa.

That is a huge accomplishment, and as the Deputy Prime Minister has said, this was not just a gift from Europe, this was the result of a lot of hard work, and over a hundred and forty reforms that were implemented by the Ukrainians, and was difficult to do. And so I think that’s an important thing.

Of course, as has also been stated, the association agreement on the horizon, maybe horizon is even too far away since it’s just coming down the pipe, but this is really, really big stuff, and I think that the people in this room, and the people on this stage, should take [inaudible], because – because it’s really, really important. And I think that everybody in this room, including the people on this stage – and some of them already have said it – that there’s still, while a lot has been done, there’s still a lot more that needs to be done.

So one of the things I like most about my job is traveling around Ukraine. Because, not only do I get to meet people like all of you, but I get to meet people, you know, where they live, and people have different opinions all over Ukraine. And they tell me all sorts of things. First and foremost, I think they are proud of their country, and they are proud of what happened in 2014, and they’re proud of where the country is going. And, you know, many of them are as optimistic about the future of Ukraine as I am.

Many of them, however, are also disappointed, disappointed that the sweeping change that I think many people thought would be ushered in, maybe in July of 2014, has – has not completely materialized yet. And I think that that disappointment is – or the – that aspiration for complete change right away is probably unrealistic, but I think – I think that, if you’re living in the countryside and looking for a change for your children, it’s understandable that people have that aspiration. And I think it’s something that it’s important to acknowledge, and so it’s important to keep on going.

And one of the things, just to talk very specifically about one sector of reform, because I think that is the way to ensure Ukraine’s future, one of the things I here most often, and maybe you here the same things, is concern about progress in the justice sector. Concern that what they’re seeing allows corruption – and perhaps that means vested interests, another way of putting it – to continue with impunity. And – and concern that, you know, is this going to go on like this, for how much longer? And I would share that this was the subject of some discussion in Washington last week as well.

So here in Ukraine, law enforcement officials tell me that 60% of cases that are brought by NABU and SBU (4:53) are stalled in the courts, 60%. Some Ukrainians have told me, and perhaps they’ve told you as well, that they feel that there really isn’t any protection under the law when disputes arise. Whether related to real estate, taxes, unfair labor practices, those terrifying raider attacks that make the front pages, not only of Ukrainian newspapers and internet sites, but – but European and American and international front pages. And U.S. – and Ukrainian investors tell me tell me that there isn’t a legal certainty that their investments will be secured, their contracts upheld, or intellectual property will be protected. And that impacts investment choices, whether you are an American, whether you are a Ukrainian, you think about these things when you make your investment choices, which in turn affects employment numbers, and that in turn affects the growth, or not, of the economy, as you are talking [inaudible], and societal well-being. So this is not – not just theoretical reform. I mean, it is a reform that, at the end of the day judicial reform impacts people where they live.

So where are we on judicial reform? I think most people in this room know that, in 2016, the framework for reform was established with constitutional amendments and implementing laws. Right now we are in – Ukraine is in the implementation phase, and it is really at the beginning with the selection of judges for the Supreme Court. And, while that’s kind of a wonky topic, it is critically important, and I think that, if there is [inaudible], there has to be confidence in the selection process, as well as in the actual justices that are selected at the end of the day. And I would note that it is – it’s just critical that the people who are selected have the highest professional and ethical integrity. And right now, I think the committee is looking for 120 candidates. But I think from our point of view, and from the point of view of perhaps others as well, if 120 candidates who are not of the highest ethical – don’t have the highest ethical standards – and aren’t the most qualified can’t be found in this room, well maybe a second round needs to be – which I think is already in envisioned – maybe those numbers need to be kicked into a second round. Because these are appointments to the highest court in the land, so this is the final appeal for anybody here who might have a dispute of some kind, and it’s a position for life. So these decisions matter, because they can’t really be undone, or if they can it would only be undone with – with a great deal of difficulty.

Ukrainians are also now discussing the establishment of an anti-corruption court as called for by Ukrainian law. Here again, I think integrity and professionalism among the judges on this court will be key to Ukraine’s future and success. It’s important that these judges, as all judges, as frankly all people, all bureaucrats, are compensated appropriately. And in line with well-established, international best practices, the court should have exclusive jurisdiction over the cases brought forward by Ukraine’s specialized anti-corruption agencies.

We also hope that the legislative drafting process will be accelerated and that, as drafting happens, there will be input from all the key stakeholders, including legal experts and civil society. I believe that selecting the right judges for the Supreme Court and establishing an independent anti-corruption court in Ukraine are the first steps towards rebuilding the Ukrainian people’s faith in the judiciary. And that faith is critical, because if people don’t believe in the court system, if they don’t believe that, if they follow the law, if they have a good case, the law will side with them, they will find other ways to meet their objectives.

So these are, I think, important steps for Ukraine in and of itself, also important steps for Ukraine’s path towards rapprochement with Europe. So, you know, today is the – the day after the day that Ukrainians celebrate – that Ukrainians mark the – the constitution of Ukraine. And I think it’s important to remember that this document reflects European values and norms with regard to respect for human rights and rule of law, separation of powers. And many of these principles go all the way back to 1710, when Hetman Pylyp Orlyk drafted Ukraine’s first constitution, which might even be the first for Europe. So I think that Ukraine is now returning to those European roots, and that makes me so optimistic about Ukraine’s future, and so I would just close by saying that the U.S. has stood with Ukraine over the last twenty-five years. We have supported the – the really impressive reform program over the last three years, and as Ukraine goes forward, that support will continue.

So thank you very much.